Hackberry is a tiny village in central Mohave County, on Route 66 in the northwestern region of Arizona.

For the prehistoric and Spanish - Mexican history of this area, check our Peach Springs page.

In 1848, after defeating Mexico, the U.S. incorporated this territory as New Mexico (later it split Arizona as a separate territory).

In 1851 the area was explored by Captain Lorenzo Sitgreaves. He was followed six years later by Lt. Edward Fitzgerald Beale (1822-1893) who was commissioned with opening and surveying a wagon road along the 35th parallel from Fort Smith in Arkansas to California.

Beale passed through Hackberry and named the spot "Garden Spring". His route was used by many settlers on their waye to California and one of them, Charles Cummings, established a ranch here in the 1870s.

Shortly after, silver was discovered by Jim Music (1875) and the community grew. The post office opened in 1878.

The mine was named Hackberry after a Hackberry tree which grew beside a spring on the hill where the mine was located. 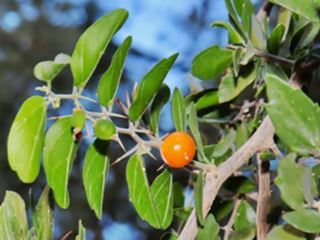 Berry, spines and leaves of a Hackberry
southwestdesertflora.com

This thorny bush can grow up to 20 ft. high. It is a member of the Elm family. It grows in canyons, washes and the desert but is more frequent close to water sources.

Its yellow-orange fruits are eaten by the wildlife and were a staple in the Native Americans' diet.

When the the Atlantic & Pacific Railroad (later the Atchison Topeka and Santa Fe Railroad laid its tracks through the area in 1883, it built a station and named after the Hackberry mine.

The National Old Trails highway (N.O.T.) was built in the 1910s through the village, which was sustained mainly by a few small mines and ranches, however, by 1919 the mine had exhausted the silver ore and closed.

It was not until Route 66 was aligned along the N.O.T. in 1926 that traffic and new business reached the area.

Service stations opened along the highway and the Hackberry General Store (The Northside Grocery) opened to cater to travelers.

Business declined after 1979, when Route 66 between Kingman and Seligman was bypassed by I-40.

You can reach Hackberry along Historic Route 66 in Arizona from Seligman (east) or Kingman (west) and reach any of those towns via I-40 or from Las Vegas, Nevada, by US 93

Where to Stay; lodging

There is plenty of accommodation close to Hackberry:

>> Book your Hotel in neighboring Peach Springs
or in Kingman

More Lodging Near Hackberry along Route 66

Motels and Hotels in ...

Location of Hackberry on Route 66

Hackberry is located in a dry region with a "cold semi-arid climate". Its altitude gives it colder winters and cooler summers than those in the neighboring desert area closer to the (lower) Colorado River.

Snow can dust the area ocassionally with around 3.7 inches (9.4 cm) yearly. Rainfall takes place 37 days per year, with 19.3 in. of rain (263 mm), with April, May and June being the driest months and August the wettest.

As the town lies to the west of the Rocky Montains there are virtually no tornados in Hackberry.

Map of Route 66 in Hackberry

Check out Hackberry on our Route 66 Map of Arizona, with the complete alignment and all the towns along it, including Hackberry.

See this Map with US 66 Historic alignment in Hackberry; below is more information on the different Route 66's alignments through Hackberry.

The site of Hackberry's General Store

Hackberry is a very small village at the foot of Peackock Mountain, with its world famous Hackberry General Store (The Northside Grocery) located on the north side of Route 66, which was aligned through the town in 1926.

Below is a "Then-and-Now" sequence of Route 66 close to Hackberry, in 1934 and nowadays. Note the same rock outcrop on the right side of the highway.

US 66 in Hackberry in 1934
arizonahighways.com

US 66 in Hackberry today
street View

In 1946 Jack DeVere Rittenhouse drove along Route 66 collecting information which he included in his book "A Guide Book to Highway 66". It is a great reference for those who want to know what US 66 was like in those days.

Rittenhouse wrote the following: "the town of Hackberry lies down in the valley across the railroad tracks. There are several large tanks in the town which contain the diesel oil used by the locomotives operating on the railroads through here. Along US 66 are 3 gas stations (one offering light repairs) and a lunchroom." He added that it had 94 residents.

He does not mention anything else until Kingman, stating that the road leaft Crozier Canyon shortly after leaving Hackberry and ran "amazingly straight" along a "great plain" all the way into Kingman. Antares was merely a railroad siding in those days.

The village of Hackberry lies to the southwest of Route 66, beyond the railroad. You can reach it from the junction located by the General Store on Route 66.

It has a few scattered houses and dirt streets. If you are keen on the pre 1930s Route 66, here you can drive the existing section that begins at Hackberry Rd. to the east and ends 2 miles west of the town.

The Store opened in 1934 on the new alignment of Route 66 that was built on the north side of the railroad and bypassed the small town.

It had a Conoco gasoline station and remained in operation until the Interstate bypassed this section of Route 66 in 1978. That year it closed.

Bob Waldmire acquired it, and re-opened it in 1992 as a souvenir shop and information center. He sold it in 1998 to John and Kerry Pritchard.

Bob worked at his parents restaurant but later became an artist, traveling as a nomad in his school bus along Route 66. He retired in Hackberry, and continued working towards the preservation of Route 66.

His 1972 VW microbus inspired the character "Filmore" in the 2006 movie Cars.

A Route 66 Mural in Pontiac Illinois was painted in his memory, in 2009 by his friends and family.

The Pritchards retired in 2016 as John and Kerry Pritchard have retired (and John took his fantastic red 1957 Chevrolet Corvette with him).

See these stills from a video by Anthony Reichardt filmed in 1993. It shows how the old store looked like almost 30 years ago!

In the upper image taken in 1991, we can see the gas pumps and the pole that at one time held the Conoco sign, and which is still standing. The lower image from 1993 shows that the pumps have gone.

Now the General Store is run by Amy Franklin, who has placed a 1990 Corvette in front of the store.

There is a lot to see when you visit the store. There are many vintage cars outside, from the "good old days" of the Mother Road.

The place is full of gadgets, signs, mementos, billboards and artifacts from the 1940s through the 1960s. It is a journey through time to stop at the shop.

The interior of the store has all kinds of Route 66 souvenirs so you can pick your choice. Read more at the official Hackberry General Store website.

Site of the Ranchero Motel and its Moai or Tiki head

Head to the northwest along Route 66, the village of Antares is only 6 mi. away (Map with directions).

> > Read all about Antares

The Alignment of Old Route 66 in Hackberry

Read the detailed description of the Alignment of Old Route 66 from Williams to Kingman with detailed maps, photos and trivia.

The segment leading into Hackberry from the east begins at Valentine.

From Valentine to Hackberry

From the Historic School in Valentine, Route 66 runs with a southwestern course and when it reaches the old Post Office of Valentine it takes a western direction.

At Hackberry Rd., the older and newer alignments split:

Take a left along Hackberry Rd. (south) cross the tracks and then head right (west) following Main Rd. all the way into Hackberry. The road goes through the village and then crosses the railroad and meets Route 66 by Hackberry's General Store as shown in this map.

The later (1937) the road was shortened, bypassing Hackberry altogether (current alignment) with a northwestern direction, parallel to the course of the railroad which skirted the Peackock mountains until reaching the Antares siding, where it turned sharply towards Kingman with a southwestern course.

The map below from 1951 shows Hackberry.

There are many outdoor places to enjoy nature close to Hackberry, from neighboring Peach Springs you can visit the Grand Canyon and go rafting along the Colorado River at Diamond Creek or enjoy the Grand Canyon Caverns along Route 66.

Read about the parks and outdoors in Kingman: you can visit the Grand Canyon Skywalk and the Hualapai Mountain County Park.

You can also drive up to the Grand Canyon, from Williams.

>> Book your Hotel in Kingman