Risk of a Tornado on Route 66. Even though US 66 alignment crosses the "Tornado Alley" in Oklahoma, Kansas and Texas, the chances of encountering a tornado during your Route 66 road trip are minimal. Read about how be aware of tornado risks, and how to be safe during a tornado. See the tornado frequency map.

Tornado (n.). Derived from ternado a word used by sailors for strong windy thunderstorms. Probably originating from the Spanish words tronada, "thunderstorm", tronar "thunder" and even tornar, "to turn or rotate" in both Spanish and Portuguese. It was also known as tornatho, turnado and tornathe.

Tornadoes are violent low-pressure storms that can strike alone or in groups. They begin as rotating, funnel-shaped clouds that extend from the bottom of a thunderstorm cloud all the way to the ground (Thunderstorms most likely to give birth to Tornadoes are called supercells).

This funnel shaped vortex may not be visible initially, but whirling objects under a cloud can reveal the funnel before it starts to sucks up dust and debris and become the well-known tornado funnel.

The funnel is a low pressure area which generates a strong updraft which cools the air and condenses humidity.

Chances of encountering a Tornado along Route 66

The U.S. has about 100,000 thunderstorms a year and less than one percent produce a tornado. So the odds are against encountering one.

The tornado frequency along Route 66 (see map below) is quite variable: west of Albuquerque New Mexico there are, on average, 0 tornado watches per year. In Oklahoma there are 10, and in the eastern Texas Panhandle, SE Kansas, Missouri and central Illinois between 5 and 8.

The weighted average frequency for the whole route is: 1.26%. That means that the probability of a tornado watch being issued on any given day is only 1.26% or, to put it differently, tornado watches are issued, on average, during 4.6 days every year.

The area with highest tornado frequencies only has less than one tornado watch per month. Slim chances of encountering a tornado during your journey along Route 66.

Tornado expert Chad Frey (Expert dispels tornado myths, The Kansan, 17 Mar. 2012) points out that even in Kansas, which has a higher tornado risk than other states, a square acre only has a probability of being struck by a tornado once every 2,400 years.

A Tornado forming in Texas

The Kiowa people lived on the Great Plains and they and their ancestors lived with tornados for millennia.

Their myth on tornados is the following: they tried to fashion a horse out of natural elements but their sorcery went wrong and their "horses" just kept on growing until they reached the sky and broke loose. They are the Mankaya. Now all that we can see of them is their long tails sweeping the ground; the tornados.

The United States is struck by more than 1,200 tornados a year; it is the country with most tornados in the whole world.

Violent tornados are more common in the U.S. than in any other country.

Tornados are more frequent to the east of the Rocky Mountains and the areas with most tornados are: The Mississippi Valley, the Midwest and the Great Plains. 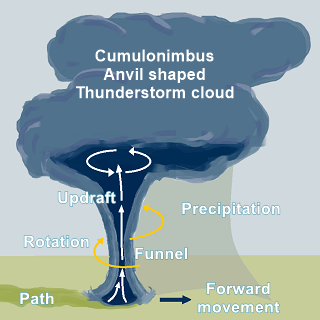 Diagram of a Tornado, A. Whittall

Insides of a Tornado

The image shows a diagram of a tornado. The anvil shaped cumulus-nimbus cloud is a clear indicator of a thunderstorm. The tornado is moving along the ground (blue arrow) preceded by a sheet of rain. The whirling air rises forming a rotating funnel (yellow arrows) which turns dark due to the dust and debris that are sucked up (white arrows) due to the lower pressure inside the tornado. Behind the tornado is a swath of destruction in its path.

The higher frequency of tornados in certain areas has led to the informal name of "Tornado Alley" for a region which spans the north of Texas, Oklahoma and Kansas. U.S. Route 66 passes right through this area.

Tornados have been documented during each and every month of the year, but they are more common during spring (March through June) and less frequent in winter.

The transition period of spring increases the possibilities of warm air meeting cool air and producing thunderstorms which in turn spawn tornados. Late summer and autumn tornados take place during the landfall of tropical cyclones.

The hottest part of the day, between 4:00 and 7:00 PM is when tornado forming thunderstorms take place.

The Fujita scale has been superseded in the US by the Enhanced Fujita scale (EF-Scale), which rates tornado strength based on the damage caused.

The scale has six categories (Zero to Five) and estimates the force of a tornado based on damage to vegetation and buildings. An EF5 tornado can have winds over 200 mph.

Staying Safe during a Tornado

Surviving a tornado requires prevention and knowledge. Violent tornados can destroy and blow away homes, cars, trucks and most houses. Fortunately they are rare, most tornados are weaker than the violent EF5 ones, so they can be survived with common sense and the following safety tips:

Get in, Get Down, and Cover Up!

GET IN, if you are outside, get inside. If you are already inside, get as far into the middle of the building as possible.

GET DOWN, get underground. If there is no basement or cellar available, go to the lowest floor possible.

COVER UP, flying and falling debris are a storm's number one killer. Use pillows, blankets, coats, helmets, etc. to cover up and protect your head and body from flying debris.

If you will be spending a night at a motel or hotel in a tornado prone area, ask the manager about their safety drill or safe place to take shelter should a tornado hit the place.

Signs of a tornado

Tornados can appear without warning and strike rapidly and sometimes without a thunderstorm nearby. Stay alert if you see clouds and look out for: 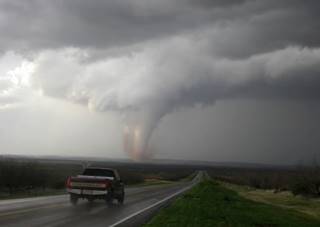 A Tornado in Texas, Bruce Haynie

If you face these conditions, take cover immediately and tune in to local TV and radio stations.

If you spot a funnel cloud nearby, take shelter immediately.

But if you see a tornado that is far away, before you take shelter, report it to the local radio or authorities and help others avoid the danger. Use common sense be cautious: if you believe that you might be in danger, seek shelter immediately.

Flying debris causes most deaths and injuries during a tornado, so you must seek shelter that protects you from this hazard:

Avoid windows, they can explode during a tornado and cause injuries or death

In a House with a Basement

Keep away from the windows, go to the basement and get under a heavy table or sturdy protection, or use a protective covering (mattress, sleeping bags, thick blankets), a helmet can protect against head injuries. Avoid getting under the heavy objects that are on the floor above (refrigerators, pianos, etc.), if the floor is weakened they may fall through it and hit you.

In a House without a Basement

Like a dorm, a motel room or an apartment: keep away from windows and go to the lowest floor and into the smallest central room (a bathroom, a closer, under a stairwell or in an interior hallway). Keep as low as possible, crouch facing down and cover your head with your hands. A bathtub can offer partial protection. Use protective padding (mattress, blankets, sleeping bags); a helmet can help protect your head.

Go to the windowless area in the central part of the building and keep away from windows (i.e. interior stairwells). Go to the lowest possible floor, crouch and cover your head. Do not take an elevator, power outages will leave you trapped inside.

In a Mobile Home or RV

Get out immediately. Go to a building, choose the nearest permanent structure and follow the instructions given above. Remember that strong winds can overturn them and most tornados can destroy mobile homes.

In a car or truck

Vehicles are very risky in a tornado, the wind tosses them easily. There are no safe options, only barely less-dangerous ones. If you can see it, far away, and the traffic is light, you might be able to avoid it by driving at right angles to its path.

Never try to outrun a tornado in a car. If you can see a tornado, look for a sturdy building and take shelter in it, underground if possible. If you are caught by the heavy winds and flying debris, park your car quickly and safely out of the traffic. Buckle up and keep in your car (do not get under your vehicle). Keep the upper part of your body below the windows. Protect your head with your hands, jacket, pullover or blanket. If you see a nearby area that is lower than the roadway and you can reach it safely, go there, lie down and cover your head with your hands. Do not seek shelter under bridges they can cause serious traffic hazards and offer little protection.

In the open outdoors

Seek shelter in a sturdy building, if none is close, lie down flat, face to the ground, in the lowest area near you (a ditch, culvert or ravine). Protect the back of your head with your arms. Get as far away as you can from cars and trees, the tornado may blow them onto you.

In a Shopping Mall

Do not panic, follow the others and move into the store, towards an interior bathroom or storage room away from the windows. Stores will have an evacuation procedure in place.

Keep with your family and wait for emergency personnel to arrive. If you know how to, assist those who are injured.

Fifty percent of the tornado-related injuries are sustained during the rescue attempts, cleanup and other post-tornado activities. Nearly a third of the injuries result from stepping on nails or from electrocution and explosions. Promptly treat any injuries sustained during the storm and use extreme care to avoid further hazards.

Stay away from power lines and any water puddles with cables lying in them, there is risk of electrocution. Look out for sharp objects, nails, glass. Avoid going inside any damaged buildings, them may collapse.

Do not light a fire or use matches, gas lines may have ruptured.

Keep calm, alert and follow the instructions of local officials or emergency crews.

The U.S. National Oceanic and Atmospheric Administration or NOAA, provides updated information on the weather and climatic hazards.

The weather forecast will keep you posted on storms, thunderstorms and supercells, which may spawn tornadoes.

If you are at a hotel or a motel watching TV or in your car listening to the radio (AM or FM), you will quickly find out when there is a storm risk.

The radio or TV will issue Tornado Watch alerts: tornadoes are possible, remain alert for approaching storms and keep tuned to the radio or TV. Once a tornado has been sighted or shows up on the weather radar, there is a Tornado Warning, take shelter immediately.

If you hear this attention-getting sound on the TV or radio, pay attention.

People who are outdoors will hear the outdoor warning system (sirens) that are activated to alert that danger is imminent and that you should go inside immediately and seek shelter.

Most communities sound sirens to indicate that a tornado warning is in effect in their area. Others activate it when a tornado has been sighted, and some may do so during severe thunderstorm warnings too.

Severe thunderstorms are a threat: they can hit you with hail over 2 inches (5 cm) diameter and winds above 75 mph (120 km⁄h).

There are applications (apps) that relay warnings about storms and tornados. The Wireless Emergency Alerts (WEA) is a service that allows the National Weather Service and other government agencies to send alerts of ongoing life-threatening situations to cell phones in an affected region.

A WEA is like a text message. Take shelter if you get one.

Tornado Frequency Map in the US