Historic Route 66 in California: crosses the southern part of California through the Mojave Desert and the Cajon Pass, from the Colorado River by Needles, to Los Angeles and Santa Monica, on the Pacific Ocean. Learn more about the "Golden State", its history, Sights & Attractions, landmarks and Towns along U.S. 66. as well as Hotels and places to stay at during your road trip across California. 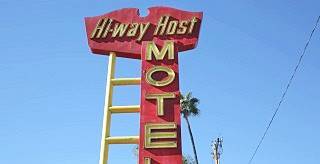 The "End of the Trail" sign on Santa Monica Pier

Chivalry novels were popular in Spain during the 1400s and 1500s. One of them mentioned a mythical island located on the western coast of the Indies, named California after its Queen, Calafia.

The book ("Las Sergas de Espladian"), "The Adventures of Espladian" was written in 1510 by Garci Rodríguez de Montalvo.

By the way, Patagonia in Argentina also derived its name from a character of a chivalry novel (Patagón).

Strangely enough, California appeared on a map drawn by Michiel Coljn, of Amsterdam, as an island for the first time in 1622.

Human beings have been living in California for at least 10,000 years. It had over 70 different Native American groups during the historical period.

The Spanish sailed along its coasts in 1542 and incorporated it to the Spanish Viceroyalty of New Spain (current Mexico). In 1769 Spanish missionaries established towns around their missions, which would later develop into modern cities like Los Angeles (which in Spanish means: "The Angels") and San Diego ("St. James").

Mexico retained California after its independence from Spain in 1821, but a growing inflow of American settlers, miners and trappers would create unrest and revolts during the 1830s and 40s. The 1846 rebellion led to the creation of the California Republic and after the Mexican American War (1848), the area was ceded to the U.S.

It joined the Union in 1850 as a slave-free state. The transcontinental railroad linked it to the rest of the nation in 1869.

The northern two thirds of the state are cut by the California Central Valley running parallel to the coast and bound on the west by coastal mountains and on the east by, from north to south, the Cascade Range, the sierra Nevada (Spanish for "Snowed Mountains") and the Tehachapi Mountains.

The southern third of the state (crossed by Route 66) is a relatively flat 1000 - 2000 ft. high arid area (The Mojave Desert), bound on the east by the Colorado River, and on the west by the Sierra Madre, San Rafael, San Gabriel, San Bernardino and San Jacinto Mountains.

To the north lies the depression of Death Valley and to the south another depression with the salt water Salton Sea Lake in the Colorado Desert.

California has a relatively high Earthquake risk: the The San Andreas Fault passes through Cajon Pass next to U.S. 66's alignment between San Bernardino and Victorville.

Its size and relief give it many different climate zones. US 66 crosses its Southern part, which has a Mediterranean Climate, cooler and less extreme along the Pacific coast, more continental and extreme further inland.

The coastal mountains block humidity from reaching the interior and create the deserts east of them: with hot summers and cold winters.

The Mexican Monsoon or "Southwest Monsoon" funnels moisture from the Ocean (The Pacific and also the Gulf of Mexico) into the desert region of the Southwest causing strong thunderstorms with intense downpour over the mountains.

Tornadoes are extremely unlikely in this area.

Thunderstorm looming over the Mojave 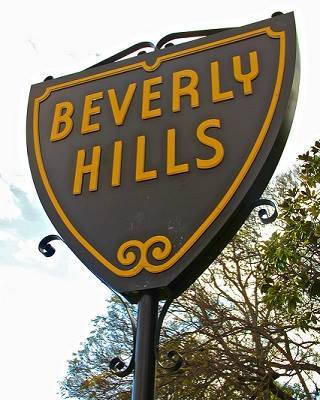 Around 2.15 Million people live along Route 66's corridor through California.

Californian Culture is a blend of Western US and Hispanic influences. It is often evoked as a land of freedom, a paradise along the Pacific coast, a high-tech, young society. The land of Hollywood, Disneyland and open-minded San Francisco.

Los Angeles is best known for its movie industry and the wealth and riches in Beverly Hills.

Where to Stay in California

The towns along Route 66 offer different lodging options. Check out the hotels and motels in the main towns.

Towns listed from East to West

>> Book your    Hotel in California

Check out RV and Motorhome Parks & Campgrounds in California.

Map of Route 66 through California

See our California Route 66 map, with the location of each town, and links on the map that give full details on attracions, sights, Route 66 icons and more.

Towns located on Route 66 in California

List of Route 66 Towns in California from East to West: 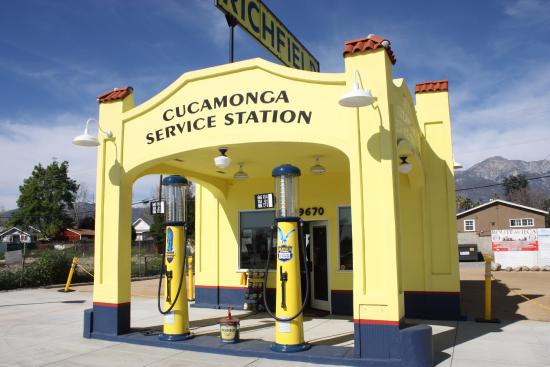 This photo of the Cucamonga Service Station (1915). Courtesy of TripAdvisor 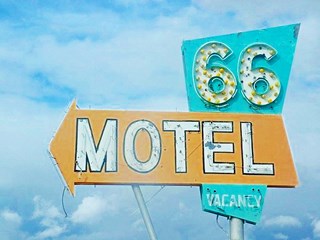 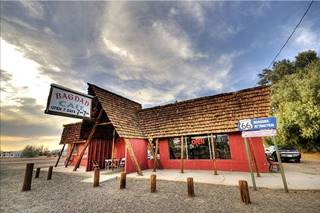 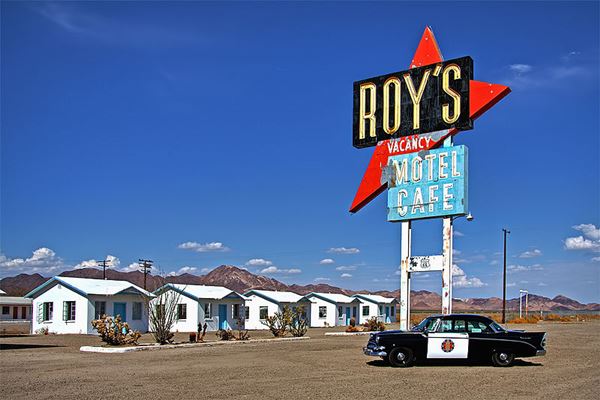 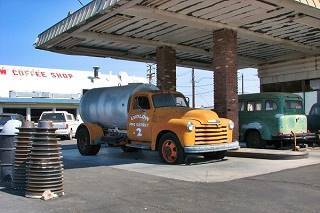 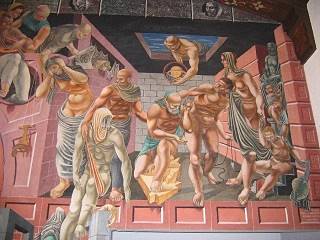 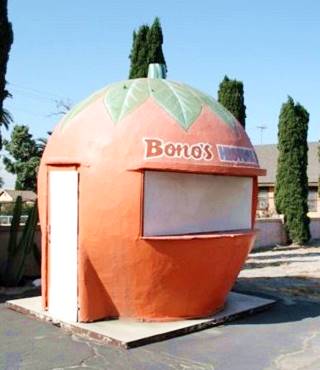 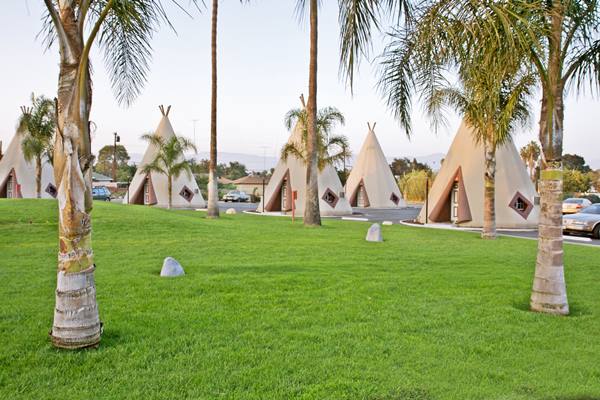 Movie Theatres and Drive In Theatres

Detailed description of the alignment of U.S. 66 through California, from East to West:

Route 66 crosses California from the Colorado River to the Pacific coast, from Needles to Santa Monica through the Mojave Desert and Los Angeles.

Full description of Route 66 across California from Santa Monica to Needles with its sights, attractions and landmarks. "Get your kicks" in sunny California. 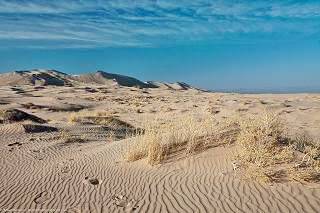 We will start in the middle of the bridge on I-40, over the Colorado River, (mile zero), at the Arizona state line.

The original Route 66 Bridge is the steel arch bridge just south of I-40. It is a Historic Bridge, and it appears in the movie "Grapes of Wrath".

You are entering the driest part of the trip, the Mojave Desert region, which was the toughest on both drivers and vehicles in the old-days. Keep on I-40, which turns north, towards Needles.

Route 66 reaches I-40 at Fenner by Exit 107 (55 mi.). Keep South as the road goes on to meet the National Trails Highway with the post-1931 alignment south of I-40, heading with a Southwest course into Essex (visit the Wayside Cafe).

There is no expected reopening date for these sections.

Back to the itinerary (remember the road closures mentioned above): After Essex comes Danby and then Chambless (see the old Store, Cabins and Store there), finally reaching Amboy (94 miles) after crossing the desert with mountains to the north and south.

See the vintage Roy's Motel and Café. The dark cinder cone of Amboy Crater is to the south of Route 66 next to the small town. The road skirts its lava field and turns Northwest passing by the ghost towns of Bagdad The driest spot in the USA and Siberia and reaching I-40 at Exit 50 at Ludlow (122 miles).

At Ludlow, pass under the Interstate and take a left along the north frontage road (National Trails Highway) towards the west.

Follow the road along the north side of I-40 passing through Dagget (166 miles). When you reach Nebo St. you must take a left to return to I-40 (168 mi.) because although US 66 keep on straight, it enters a Marine Base.

Both Barstow and San Bernardino are named in the song Route Sixty-six (Get your kicks...).

At Exit 1, follow Main St. to the north of I-40, cross I-15 and keep west. Visit the Harvey House Railroad Depot, a Historic Place with its two Museums. 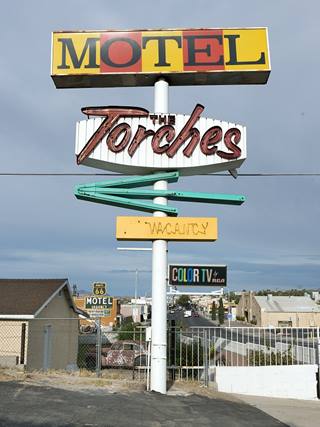 The road arches round Barstow, crosses CA hwy 58 and takes a Southwesterly course.

Take a right onto Seventh St. southwards and at Exit 150 join I-15 southwards.

I-15 and the old alignment of Route 66 take a sharp curve towards the south through San Bernardino National Forest. You can take Exit 129 (234 miles) and follow Cajon Boulevard, on the west side of I-15. At Exit 124, Kenwood Ave. enter I-15 and keep to the left, along I-215 towards San Bernardino. After the interchange of I-15 with I-215 keep right and exit again, onto Cajon Blvd. (242 mi.) which will take you into San Bernardino.

The Post-1930s alignment followed Kendall St. and then south along North E. St. until W. 5th St. where it turned west again.

It was on N. E St. where McDonald's opened their first Hamburger store. Don't miss the Wigwam Village #7, a Historic Site and one of the two surviving Wigwam hotels along U.S. 66.

The road goes through Rialto, Fontana (259 mi.) and Rancho Cucamonga (268 miles) with a westerly direction.

It keeps on west through a chain of towns: Upland, Claremont (275 mi.) , and then takes a NW course at La Verne, crossing CA 210 and going through San Dimas and Glendora (284 miles).

After Azusa it becomes Huntington Dr. through Irwindale, Duarte and Monrovia (with its historical Aztec Hotel), crosses I-210 (Exit 33 - 294 mi.) and keeps on westwards through Arcadia ( there is another town with the same name in Oklahoma) until it becomes Colorado Blvd., on the south of Sierra Madre, through Lamanda Park and into Pasadena (302 mi.). 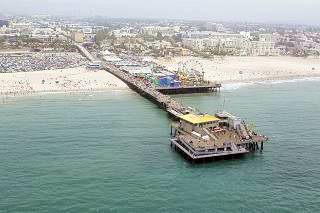 There are several sites in Pasadena that are listed in the National Register of Historic Places: Foothill Boulevard Milestone, Howard Motor Company Building, Colorado Street Bridge, Bekins Storage Co. and the Rialto Theatre (which is in South Pasadena on an older alignment of Route 66); there are several US 66 alignments from Pasadena into Los Angeles: the original 1926 one that ended in downtown Los Angeles, later 1930-40s variants through Northeast Los Angeles, and the late 1940s ⁄ 50s road which we describe below:

See all the Route 66 alignments in L.A.

In downtown Pasadena turn left onto Arroyo Parkway southwards which becomes CA 110 and in South Pasadena turns west as Arroyo Seco Parkway (which is a Historical Place). It passes on the north side of Montecito Heights, and right in front of the Dodger Stadium and take Exit onto US 101 N, (right - 311 miles), this is the Hollywood Freeway.

The Boulevard takes you through the heart of Hollywood and West Hollywood famous for its Sunset Strip, and then it takes a southwesterly direction through Beverly Hills and passes under I-405 (325 mi.).

Original US 66 ended in downtown Los Angeles (1926) it was later moved to the Pacific Coast Highway (then US 101 Alternate) which is current SR 1, in Santa Monica, California.

It heads towards the sea, through Santa Monica. Where it used to end, on Lincoln and Olympic Blvd. in the 30's and 40's.

But don't turn left on Lincoln Blvd. Keep straight ahead to its western terminus, on Ocean Avenue, 0.3 miles north of the Santa Monica Pier. End of Route 66. (333 miles).

There is plaque at Ocean Ave. and Santa Monica Blvd. that dedicates US 66 as the Will Rogers Highway.