Historic Route 66 in Kansas: crosses the southeastern corner of Kansas, with a total length of only 13 miles. Read more about the Kansas segment of Route 66, its history, Sights & Attractions, landmarks and Towns along U.S. 66. as well as places to stay during your road trip across Kansas.

The name of the local Kansa Native Americans was applied to the land they lived on. Its meaning is believed to be "people of the wind" or "people of the south wind", but it is uncertain.

Paleo-Indians peopled the region about 10,000 years ago. Their descendants were hunter gatherers that lived on the plains.

Spanish explorer Francisco de Coronado crossed the region in 1541. It was part of the French Louisiana and purchased by the US in 1803. Southwestern Kansas belonged to Spain and was incorporated to the union after the Mexican-American War in 1848.

It was formed into a Territory in 1854 and admitted as a slave-free state into the Union in 1861. 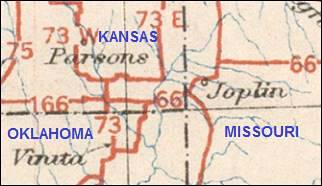 Kansas is located on a geologically stable region and there are no volcanoes in the state. Earthquake risk is low.

It western part has a semiarid steppe climate, its eastern region has a Humid Continental climate with hot damp summers and cold winters. The southeast, where US 66 cuts across the state, has a humid subtropical climate with very hot summers and winters which alternate between warm and very cold.

The lack of mountains allows the cold Arctic winds and the hot and humid air from the Gulf of Mexico to cross the state.

The intrusion of hot and cold air makes it prone to thunderstorms which spawn tornadoes. Kansas is part of Tornado Alley, and experiences an average of 50 tornados yearly.

Around 13,000 people live along Route 66's corridor through Kansas.

Where to Stay in Kansas

The towns along Route 66 offer different lodging options. Check out hotels and motels in the main towns.

> > Book your Hotel in Kansas

Check out RV and Motorhome Parks & Campgrounds in Kansas.

Map of Route 66 through Kansas

A map of Kansas

Detailed description of the alignment of U.S. 66 through Kansas, from East to West:

Towns located on Route 66 in Kansas

Click on the link below to read about the main landmarks on Route 66 in each of the towns it crosses in Kansas:

Towns from East to West

The shortest segment of US 66 in any state.

Route 66 crosses the southeastern corner of Kansas, the shortest segment of the whole Route 66: 13 miles. Below is a description of the towns, landmarks and attractions along the road. 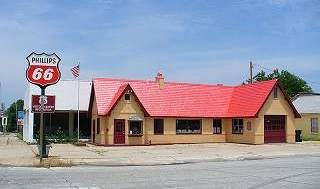 From Joplin in Missouri, we described the alignment up to the KS-MO state line following W. Old 66 Blvd., at the State Line (mile zero), it changes its name to Front St.

The road runs to the west, crosses Spring River and entering Riverton (5 mi).

At the west of the town, the alignments split at U.S. 400 - Alt US 69: the later one follows U.S. 400 - Alt US 69), but the 1926 road keeps on west. Follow it to the Historic Bridge, over Brush Creek (7.5 mi): the Rainbow Curve Bridge is the last Marsh Arch Bridge of all Route 66, and is listed on the National Register of Historic Places. After the bridge, the road curves south towards Baxter Springs. 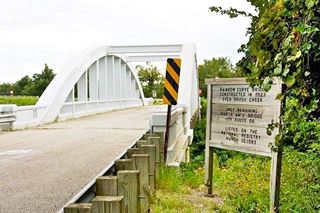 It enters the town (10 mi) and curves left to meet again with Alt US 69. Take a right. The road passes through the central part of the town. Visit the Baxter Springs Independent Oil and Gas, a listed Historic Place.

The road leaves town, curving around a Walmart (the 1926 alignment went behind it, along Roberts Rd. on the east and W 30th St. on the south). Keep straight until you reach the Oklahoma state line (13 mi). US 66 keeps on southbound, along Alternate US 69 towards Commerce in Oklahoma.

The service station dates back to 1934. It sold a regional brand of gasoline in the states of Kansas, Oklahoma and Texas, and this gave it its name: Kan-O-Tex. The brand's logo was a sunflower set behind a five-pointed star. The company is now defunct.

It was previously known as "Little's Service Station, "4 Women on the Route and now "Cars on the Route", due to the boom truck that inspired a character in the movie Cars.

The tow truck in Pixar's animated movie Cars, "Tow Mater" was inspired by a truck which can be seen next to the service station.

The truck (a boom-truck, which was used to lift gear from the mine shafts near Galena), was an L-series International Harvester 1951 model truck.

This series of trucks was introduced in 1949 and replaced in 1952 by the R Series.

It was built on the site of the Banks Hotel, on the Main Street in Galena (at that time it was U.S. Route 66). A few years later, a repair shop and garage were added.

The new four-lane US 66 highway moved to 7sth St. in 1961, leaving the service station far from the flow of travelers. When I-44 bypassed the town (and Kansas) it went out of business until it was restored in 2007.

The restored site has a roadside café and a souvenir shop. It still has the facade and gas pumps but includes a diner which the original did not have.

The classic buildings of an early 1900s American city along the original Route 66 alignment.

Route 66 is the Main Street in Galena

The oldest continuously operating store on Route 66: Open since 1925.

Leo Williams opened a small diner after he returned from serving in the US Army during World War I. He worked for the Empire District Electric Plant and his wife Lora took care of the shop.

A Tornado destroyed the premises in 1923, so he rebuilt it, building one-story store in 1925, which is still operational, it was known as the Williams' Store 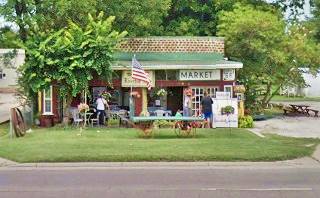 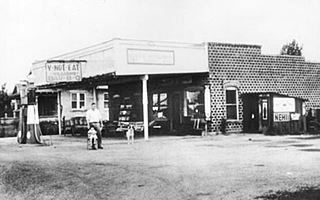 Photograph of the "William's Store"
National Register of Historic Places

When Route 66 was created in 1926, a growing flow of visitors passed in front of the store and it was included as an official stop on the maps of the 1930s and 40s.

Besides the diner, the store had a shop that sold food, candy, ice and clothes. It even had a croquet court, but later removed it to add parking space.

Lora's daughter's mother in Law purchased the store 1972 and sold it to Isabell and Joe Eisler in 1973.

The store was renamed as Eisler Bros Old Riverton Store. Their nephew, Scott Nelson worked there and managed it until he bought it from the estate after his aunt and uncle passed away.

Enjoy its virtually unchanged ambiance, with a glass-enclosed porch, pressed-tin ceiling and old shelves. It sells groceries and Route 66 souvenirs.

This service station is an example of the 1930s marketing strategies of the major oil companies during the Great Depression.

It is located on the northeastern corner of Military Ave and E. 10th St.

They designed their stations to blend into the town's scenery with a pleasant cottage design to sooth the locals and to provide a sense of security to the travelers.

It is located at the northern part of the town's commercial district, on Route 66.