US 66 in Missouri: the Mother Road crosses the state from Saint Louis in its Central - Eastern part, on the Mississippi, to Joplin, in the Southwest, next to Kansas and Oklahoma. Learn all about Missouri, its history, Sights & Attractions, landmarks and Towns along U.S. 66. as well as places to stay during your road trip across Missouri.

Historic Route 66 in Missouri is packed with vintage gas stations, classic motels, neon signs from the 1950s, diners and stores. Get your kicks on Route 66 in the State of Missouri (MO) 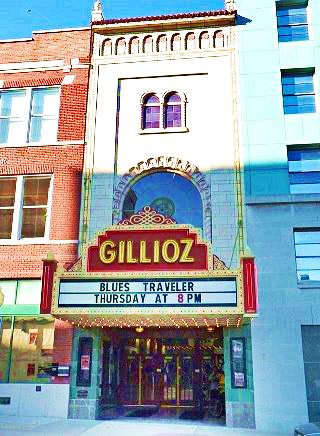 The nickname "Show me State" has disputed origins, one version attributes it to Congressman Willard Vandiver who in 1899, who used it in a speech to state his skepticism, he needed to be shown something to believe in it, words would not convince him.

The Missouri River gave its name to the state. In turn it originated from the local Missouri Indians. Their neighbors, the Miami-Illinois speakers called them the "ouemessourita", which meant "those who have dugout canoes"

The History of Missouri 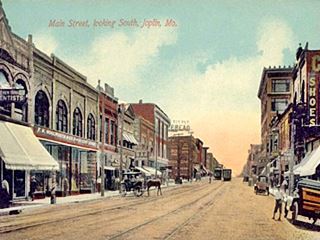 The ancestors of Native Americans have lived in Missouri for at least 10,000 years, with mound builders constructing massive earthwork structures along the eastern Mississippi area until 600 years ago.

The French from Canada settled Missouri via Illinois in the mid-1700s however St. Louis was founded by French from New Orleans in 1764. The region was known as Louisiana and passed to the Spaniards in 1767. Napoleon recovered it for France in 1800 but was sold to the U.S. in 1803.

St. Louis was the starting point for the settlement of the West, hence its name "Gateway to the West" and the famous Lewis and Clark Expedition started off from this city.

This Midwestern state is relatively flat north of the Missouri River which marks its NW border and crosses the central part of the state to join the Mississippi River north of Saint Louis (the Mississippi marks the state's eastern border).

South of the Missouri are the rolling hills of the Ozark Mountains, with its limestone rocks that form caves and sinkholes.

Missouri is located on a geologically stable region and there are no volcanoes however, Southeastern Missouri (New Madrid) suffered serious earthquakes in the early 1800s.

Landlocked Missouri has a Humid Continental climate: summers are hot and humid; winters are cold with plenty of snow. Lacking high mountains, the cold Arctic air and the hot damp air from the Gulf of Mexico flow across the state unchecked.

It is part of the "Tornado Alley" and Thunderstorms take place frequently during summer; tornados strike often.

Around 932,000 people live along Route 66's corridor through Missouri. 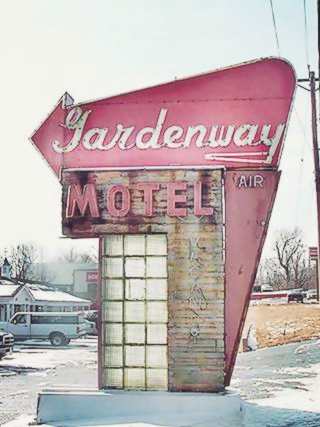 Where to Stay in Missouri

The Missouri towns along Route 66 offer different lodging options. Check out below the hotels and motels in the main towns:

Towns are listed from East to West

Find your hotels and motels in....

Check out RV and Motorhome Parks & Campgrounds in Missouri.

Map of Route 66 through Missouri

A map of Missouri

Towns located on Route 66 in Missouri

List of Route 66 Towns in Missouri from East to West:

Route 66 crosses Missouri with a Northeast to Southwest course, from St. Louis, on the Mississippi, by the Illinois border, to Joplin by the Kansas state Line.

A detailed description of Route 66 as it crosses the state of Missouri (east to west), with the main sights, attracitions, towns and places to see. 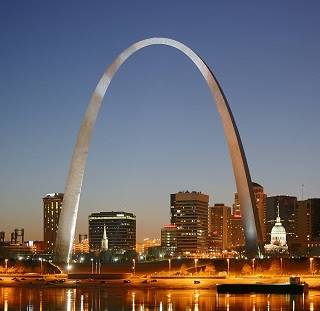 Illinois segments near St. Louis: Route 66 had several alignments through East Saint Louis and St. Louis. We described the northernmost one, used in the 1930s to 1950s, across the historical Chain of Rocks Bridge.

There were other alignments to the south, with four different bridges crossing the Mississippi River:

Read about all the Route 66 alignments in St. Louis.

From the middle of the Bridge (state line and mile zero) head west and leave the Interstate, to the right at Exit 34, take a left onto Riverview Drive, southwards. At Bellefontaine Rd, (4.5 miles) turn left onto N. Broadway Ave, at Calvary Cemetery, take a right onto Calvary Ave. (6 mi.) and at W. Florissant Ave, turn left, southwards.

Pass under I-70 and continue towards the center of Saint Louis. Florissant Ave. ends at Mullanphy Ave. (11 mi.), follow the latter east and curve into N 13 St., left onto Cass Ave., and then right onto N. Tucker Blvd., southbound.

At the crossing with Chippewa St. (MO-366) (17 miles) take a right along MO-366 and follow it through Malborough (where the once famous Coral Court Motel stood), and Crestwood, followed by Sunset Hills and Fenton. The road will lead you (27 mi.) to I-44's Exit 276, use it to access I-44 westbound.

You will pass the "Ghost Town" of Times Beach, evacuated in 1983 due to dioxin contamination, by the Meramec River; it is now the Route 66 State Park (37 miles).

When you reach Eureka (39 mi.), visit its Meramec River U.S. 66 Bridge (Historic Site). Continue along I-44 and leave it at Exit 261 (41.5 miles) in Allenton, cross to the south of I-44 and take a right onto Business Loop 44, which becomes Ossage St. as it enters Pacific (visit the Historical Site of the Red Cedar Inn) Cross the center of the city (46 miles) and keep on westwards along Bus. Loop 44 which is the south frontage road of I-44. 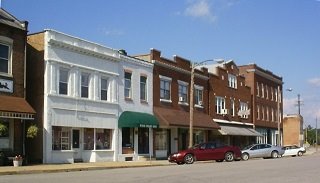 Turn right and keep along the south Frontage Road towards Oak Grove Village and then go through Sullivan (80 miles), and keep SW along W. Springfield Rd, and the South Service Rd., passing through Bourbon (86 mi.) along Historic Route 66. The road becomes the South Frontage Rd. again, passing by a "ghost town": Hofflins and 3.5 mi. ahead, entering Cuba passing through its business district (98 miles).

Cuba is famous for its murals, stop and enjoy them; visit the Wagon Wheel Motel, a Historical Site. 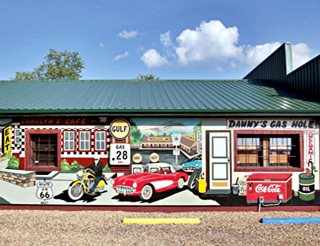 The large rock road cut just east of the bridge over the Big Piney River is the famous "Hooker Cut", which when cut in the 1940s, was the deepest road cut in Missouri and the whole US with 90 feet.

Missouri S&T Stonehenge, at the University of Missouri, Rolla

Take a right along MO-CC (US-66 & South Frontage Rd.); pass Conway (202 miles). The road runs towards the south, well to the east of I-44, passing through a ghost town: Sampson.

It goes through Niangua and then Marshfield (215 mi.). Stick to MO-CC (US-66) as it approaches I-44, and passes through Red Top and Strafford (228 miles) and becomes Co. Rd. 744 follow it towards Springfield.

Springfield "the Birthplace of Route 66"

There are three sites that are listed in the National Register of Historic Places: Gillioz Theatre, the Rock Fountain Court and The Abou Ben Adhem Shrine Mosque. Don't miss the plaque on the Park Central Square, which dedicates Springfield as "the Birthplace of Route 66".

Co. Rd. 744 passes by Springfield on its northern side and intersects with U.S.160 (242 mi.). Take a left along U.S. 160 southwards to pass along the western side of Springfield.

Old US 66 close to Carthage

At I-44 Bus. Loop, in SW Springfield (244 mi.) go right, cross I-44 and keep along Co. Rd. 266, passing through Halltown (259 miles), followed by the ghost town of Plano. When you reach the access to Co. Rd. 96 (261 mi.), keep straight on the "old" road, pass through Paris Springs and the road will curve following Johnson Creek to the SW. Cross Co. Rd. 96 and continue (Co. Rd. 266 becomes MO-N) for 1⁄2 mi. take a right across the old bridge on Lawrence Rd. (MO-2062), pass Spencer and join Co. Rd. 96. Go left (west). See the map above, this is shown with the black line. The road passes through two small communities: Heatonville and Albatross and then reaches Phelps (274 miles). Then come two more small communities: Rescue and Plew before reaching Avilla. The road keeps on SW and reaches Carthage (309 miles). 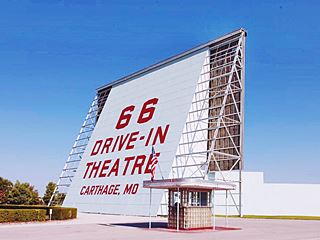 Visit its Historic Site: the 66 drive-in theater. Take a right on Central Ave. and a right on Garrison Ave. and pass through the town (310 mi.). Take a right again along Route 66, cross I-49 (311 miles) and head west towards Joplin.

The town's name is mentioned in the song Route Sixty-six (Get your kicks...).

The later alignments followed MO-66 to the state line, and continued as KS-66 into downtown Galena KS, where both alignments met at Main St.