The town of Kellyville was known for its cotton gin and Rock Motel, both demolished. It was the site of the worst railroad accident in Oklahoma, and of the Crybaby Bridge and the Historic Route 66 in Kellyville.

Kellyville is in Creek County, and its Nickname is "Cullerville".

For an early history of the region see Tulsa's History.

James E. Kelly was the first settler in the area. In 1892 he secured a lease from the Indian Agency and set up a trading post close to Bakers Junction. In 1893 he moved the post east of its initial location to a site along the future railroad that would link Sapulpa with Oklahoma City.

Frisco railroad named the station after the first settler in the area: James E. Kelly, "Kellyville".

A post office was established in Nov. 1893, with Kelly as the postmaster. In 1898, the St. Louis and Oklahoma City Railroad (later the St. Louis and San Francisco Railway or "Frisco") built a station at Kellyville. The small community grew and a bank opened and cotton gins were built near the railway depot.

In 1917 a terrible and tragic railroad accident took place in Kellyville when two trains collided head-on.

Oil was discovered in this part of Creek county in 1915, and it brought prosperity: by 1919 there was a refinery in Kellyville and also telephone service. Route 66 was aligned through the town in 1926, along the former Oklahoma Highway No. 7 that linked Sapulpa with Bristow.

The traffic along the Mother Road helped the economy during the period of the Great Depression (after 1929). But in the late 1950s, the Turnpike linking Oklahoma City to Tulsa was built, replacing Route 66, and it bypassed Kellyville. Traffic dropped and business dwindled.

Apparently there was a project to build an artificial ski resort in Kellyville during the 1970s, but it was dropped.

> > Book your hotel in Tulsa close to Kellyville

Find your room nearby, in Tulsa:

>> There are several RV campgrounds close to Kellyville in Tulsa, Bristow and Sapulpa

The climate in Kellyville is temperate, with occasional thunderstorms, hail and tornados.

Tornado Risk: Kellyville is located insided the "Tornado Alley in Oklahoma and faces about 10 Tornado watches every year.

Rainfall is around 41 inches (1.040 mm) annually with late spring and summer as the wettest months (May, June and Sept.). On average there are 92 rainy days every year.

Snowfall: snow may fall at any time between November and March, and about 9.6 in. (24.3 cm) fall every year.

Along Route 66, heading east, it is 8 miles to Sapulpa and 21 miles to Tulsa. Catoosa is 39 mi. northeast, and Claremore is 48 miles away.

Map of Route 66 through Kellyville Oklahoma

See the alignment of US 66 in Kellyville, on our Oklahoma Route 66 Map, it has the complete alignment across the state with all the towns along it.

Route 66's alignment in Oklahoma: the Historic Route 66 through Kellyville

Read below for more information on Route 66's alignment in Kellyville.

In his 1946 guidebook to Route 66, Rittenhouse wrote that it had "cafes; gas; small garage; no tourist accommodations... about ten business establishments."

Kellyville is a typical Small Town along Route 66. Its main landmarks, the Rock Motel and the Cotton Gin were torn down after 2007, but you should visit its "oil derrick" and the "Crybaby Bridge" as well as the original 1926 alignment next to the town, and also learn about the tragic railroad accident.

Book your Hotel in nearby Tulsa or Chandler:

Hotel in Chandler
Hotels in Tulsa

In 2013, a commemorative, 30-foot-tall oil derrick was added on the north side of Route 66 that was donated by a local resident Garie Henderson.

Other Sights, but now gone

There was a "Cotton Gin" in the center of the town, but it was demolished in 2011, another Route 66 landmark casualty.

A cotton gin is a machine that is used to separate the cotton fiber from the seeds. The fiber is used to make cloth and the seeds are the source of oil and animal feed.

In 1930, as the Great Depression began, there were four cotton gins in Kellyville.

East of the town there was an old motel whose name was due to the rock facade of its cabins. They were razed in 2007.

Oklahoma's worst train accident happened on 28 September 1917, at Kellyville. A total of 32 were killed. 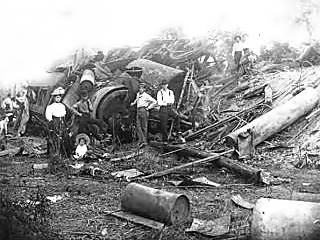 Train No. 407 was heading westbound, from St. Louis to Lawton, Oklahoma, it had a steam engine and a steel baggage car; the other wagons were made of wood: mail car, two coaches, three sleepers, a chair car and an office car. The mail car telescoped into the first coach. Perhap a steel coach would have reduced the fatalities.

Extra train 1322, was moving eastwards, an empty troop train returning to Fort Sill (it was used to move soldiers during World War I).

Unfortunately, there was another train in the area, Extra 1343, which had stopped at a siding to let Train 407 pass, and it was mistakenly identified by the engineers aboard Train 407 as Train 1322.

No. 407 kept on westwards and crashed into Extra 1343 head-on. The crew saved their lives by jumping off the train just before the collision.

The investigation showed that the enginemen had been sloppy in not clearly noticing that the train they had passed was 1322 instead of 1343. The conductor who had been dismissed before the accidente had been reinstated as there was a shortage of conductors due to the War.

Visit the nearby towns of Bristow and Depew, to the west; also Sapulpa and Tulsa to the east, with their classic Route 66 landmarks.

You can still see two old segments of Route 66 in Kellyville: The first is on the north side of OK-66, east of the town, just west of Maple Dr.: there is a curved paved segment; this is Map of it.

Another segment lies further west, and i begins on the south side of OK-66, it is Oak Street, curving towards the railroad starting at Allen St. (See map).

Both were paved in Portland concrete in 1926.

Yet a third section can be seen on the south of the road where Polecat Creek approaches modern OK-66, hidden among the trees.

Drive west of Kellyville and take a left along Slick Rd., after 1.1 mi., at Polecat Creek you will see the old bridge on the left. Map with directions.

A Crybaby Bridge is a name given to certain haunted bridges, alluding to a local legend that a crying baby can be heard at the bridge because it died or was killed there or thrown off the bridge.

Kellyvillle's Crybaby Bridge is another urban myth: a woman and her child were driving down Slick Road escaping from her husband, but she drove off the bridge into the stream below. The baby's body was never recovered. And its ghost remains there until this day, crying under the bridge.

It is a reservoir on Polecat Creek just north of Kellyville. A spot for swimming, trekking, boating, fishing, camping, with RV park.

See the nearby towns for outdoor recreation there: State Parks near Kellyville (in Tulsa)