The town of Stroud, is "Oklahoma's Winery and Grape Capital" and is the site of the famous Rock Café, ghost sign and Skyliner motel among others. To the east and west of town are the sections of the Historic 1926 roadbed and a dirt surfaced original Ozark Trail road. There is plenty to see and do in Stroud.

Stroud is a located on the eastern edge of Lincoln County, Oklahoma. Its Motto is: "Oklahoma's Winery and Grape Capital"

For an early history of the region see Tulsa's History.

The town was originally a part of the Oklahoma Territory, just west of the land of the Creek Tribe and therefore was not part of the Indian Territory.

James Wrexel Stroud was the first to settle the area and, in 1892, built a store about one mile from the current townsite. He also ran the post office and the local saloon which sold alcohol (which was banned in the neighboring Indian Territory).

When Arkansas and Oklahoma Railroad (acquired in 1901 by the St. Louis and San Francisco Railway or "Frisco") defined the location of the station along the line it was building, Stroud moved the town to its present location.

James W. Stroud House is listed in the National Register of Historical Places

His main focus was the railroad business and he began as a railroad attorney for the N.Y. Central Railroad he eventually became its president. Later on he was accused of catering to the interests of railway and insurance concerns.

When Oklahoma became a state of the U.S. in 1907, the "whiskey town" business ended as it became a "dry state". At that time it had 1,312 residents. It was included in Lincoln county.

Cotton processing at the local cotton gins ando cottonseed-oil mill were the mainstay of the local economy.

A legendary bandit, Henry Starr robbed both local banks, the Stroud National Bank and the First National Bank in 1915, but he was captured after being wounded in a gun battle and sentenced to prison.

The oil industry fueled the local economy after 1920 and Route 66, which passed through Stroud provided additional income as the town catered to the travelers' needs.

The Turner Turnpike (I-44) was completed in the late 1950s and bypassed the downtown district.

>> Book your Motels and Hotels close by, in Tulsa
or
Chandler

Book a hotel in Stroud

>> There are RV campgrounds in Stroud (see also Sapulpa and Davenport).

Temperatures can exceed 100°F (38°C) during summer. Which is also (together with late spring) the rainest period. Total rainfall averages 41 in. (1.040 mm) and around 90 days a year rainy.

Thunderstorms may cause tornados at any time of the year, but they are more frequent during Spring and Summer. As Stroud is located inside Oklahoma's "Tornado Alley there are about 10 Tornado watches every year.

During the night of May 3, 1999, a tornado which had touched down near Sparks Oklahoma headed straight for Stroud and hit it with F2 - F3 strenght.

It destroyed the Tanger Outlet Mall which had 53 stores, the truck distribution center of Sygma, a foodservice company and damaged the Municipal Hospital. It dissipated one mile south of town just before midnight.

Fortunately there were no fatalities but it caused the loss of 800 jobs: neither the mall or the Sygma warehouse were rebuilt.

Check out Stroud on our Route 66 Map of Oklahoma, with the complete alignment and all the towns along it.

The map above shows US 66 alignment through Stroud, the color key For Stroud only is the following:

Map with the alignment of Route 66 through Stroud

Route 66's alignment in Oklahoma: the Historic Route 66 through Stroud

Read below for more information on Route 66's alignment in Stroud.

Stroud has many vintage Route 66 classic buildings listed in the National Register of Historic Places, to the east and west of the town are original 1926 segments of Route 66 and the Ozark Trails alignment too. Enjoy the historic Rock Café and the Sac and Fox Powow, there is plenty to do and see in Stroud. 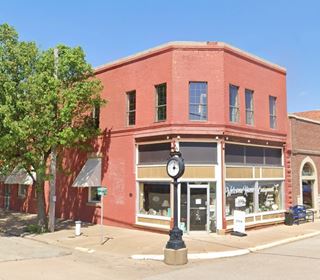 This two-story building is built in red-brick Commercial style and was built in the early 1900s.

It originally catered to those traveling to town in train, but quickly adapted to the flow of visitors that Route 66 brought to town: it is one of the few hotels that competed against tourist courts and motels along Oklahoma's Route 66.

One of them, Radiator Springs character Sally Carrera is based on Dawn Welch, proprietor of Rock Café.

The movie mentions her in the final credits: "Dawn Welch, The Rock Cafe, "Home Of The Fried Pickle Spears", Stroud, OK" 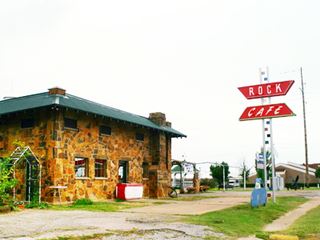 Roy Rives opened it in 1939 to cater to those traveling along Route 66. It was later a Greyhound bus stop and after World War II it was open 24 hours-a-day.

It is built with rubble sandstone in Giraffe-style (its color resembles the skin of a giraffe) with coarse mortar joints and a very large chimney. It was reopened in 2010 after the fire that gutted it in 2008 and still sells fries and burgers.

Open daily from 6 AM to 9 PM. See its Google Street View 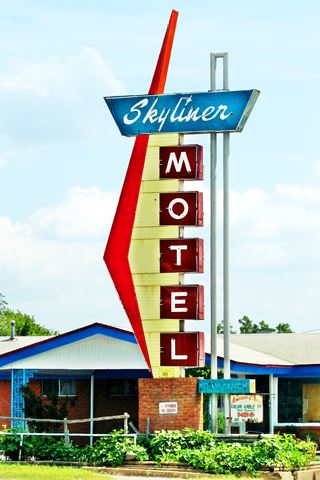 A Classic motel sign along Route 66, don't miss it:

A ghost sign is an old hand-painted advertisment that has survived on a building for a long time and not been removed or painted over.

There is an old sign advertising Coca Cola painted on a brick wall of a building, facing east along Route 66 as you enter town from the east, you will spot it on the south side of the road, it is the famous Ghost Sign.

See its Street View and location.

Events and Fun in Stroud

The town hosts an annual, city-wide garage sale in June and, of course, a Fourth of July celebration.

The tribal festival takes place every year, in early July.

Native Americans whose original lands were near Lakes Huron and Michigan. They were relocated to Illinois, Kansas and finally to the Indian Territories which later became Oklahoma in the 1870s.

This can be written powwow, pow-wow, pow wow or pau wau. It is a gathering of Native Americans, and the word originates from the Narragansett language.

Their headquarters is near Stroud and their tribal jurisdiction spans Payne, Pottowatomie and Lincoln counties.

In Stroud they operate the Sac and Fox Nation Casino and they issue their own vehicle license plates for tribal members.

Jim Thorpe (1888-1953) was a Sac and Fox athlete who won gold medals (decathlon and pentathlon) at the 1912 Stockholm Olympics.

Interestingly, the nation is one of Stroud's major employers.

Stroud names itself as "Oklahoma's Winery and Grape Capital" and as such there are several wineries and vineyards in the area.

In June it celebrates the Stroud's Annual Historic Route 66 Wine & Food Festival, a good opportunity to taste its wines and food.

East of Stroud (See position on this map), is the Shoe Tree Trading Post, with its "shoe tree", a tree that passersby have "decorated" by flinging at it old shoes tied together by their laces. There was an original shoe tree here, but it fell down in 2010. Another one took its place. The practice of creating shoe trees is highly controversial, because they are not exactly nice sights, original yes, but not pretty to see.

Another shoe tree on Route 66 in Amboy, California, collapsed under the weight of hundreds of shoes, so it isn't exactly a nice way to treat trees.

Visit, to the west, the nearby town of Davenport, and to the east, Depew, Bristow and Kellyville.

The Historic "Original" segments of Route 66 near Stroud

Drive along the Original Route 66 alignment of the 1920s

Below we describe the sections of Route 66 from east to west, driving from Depew to Stroud and then west of Stroud towards Davenport.

Book your Hotel in nearby Tulsa or Chandler:
Hotel in Chandler

The original road that linked Bristow, Sapulpa and Depew was the "Ozark Trails" system, which was built in 1915 and had many unpaved sections. It was incorporated into the new U.S. Highway 66 when it was created in 1926.

Following OK-66 from Depew towards Stroud, after 8 miles, the road approaches I-44 (Turner Turnpike) and turns towards the southwest. At this point there are two options to follow the "old" alignments of Route 66:

At the curve, head straight west until reaching Graham Rd., turn right, pass under I-44 and once on the north side, take a left along 17th St.

Just ahead is an original concrete bridge built in 1930, spanning Lilly Creek. It has concrete spans 30 ft. long. It is shown below:

Keep westwards and take a left on Allied Rd., head south, cross I-44 and continue, crossing the bridge (a pony truss bridge) built in 1921 over Salt Creek, which is five years older than Route 66 itself. It is shown below:

Continue southbound until reaching OK-66 again at the point where it becomes Main St. and enters Stroud.

Take the curve mentioned above (8 mi. west of Depew) and continue until reaching Graham Rd. Take a right and a left to go along the Old Hwy 66. The road crosses Salt Creek on a steel pony truss bridge built in 1928. The road was built and paved later, in 1930.

Keep along the road until reaching Allied St. at Main St. where the "older" and "newer" alignments meet and enter Stroud along Main St.

West of Stroud, to Davenport

Current OK-66 west of Stroud follows the alignment of the 1930 road, upgraded in 1960. But the older road is futher south, and follows a dirt road. We describe it below:

Leave Main St. along South 8th St. (OK-99) and take a right along W Central Ave. this is the original 1926 - 1930 alignment of Route 66 west of Stroud. The road reaches the railroad and curves towards the south (the left) along S 15th Ave. Follow it until reaching E 0880Rd. and take another right, along it.

Take a left along M 3540 Rd. and continue along the dirt surface road until reaching E 08990 Rd. At the junction there is a very rare monument built in 1915, a Ozark Trail marker.

The Ozark Trails Monument is a stone obelisk that is 21 feet tall, it is quite unique and rare. It marked the intersection of Ozark Trail roads.

There was one, now gone in Romeroville, New Mexico, on what would become the 1926 US 66 alignment. It was the western terminus of the Ozark Trail.

Turn right along E 08990 Rd. and continue along it until reaching OK-66 again and the 1930 alignment just after Dosie Creek (the old 1909 wood plank pony truss bridge has been replaced with a concrete one in 2004) and the railroad. The 1930 bypass of the older alignment was paved in Portland concrete and shortened the road.

The private organization, the Ozark Trail Association petitioned the Lincoln County commissioner to create and designate a county road system belonging to the "Frisco-Ozark Trail system". The roadbed was built between 1915 and 1917 and was incorporated into the Ozark Trail highway network.

The network was a collection of dirt or gravel roads linking the towns in Lincoln county. Later, when Route 66 was created in 1926 it included these roads into its initial alignment.

When US 66 was paved in 1930, it was shortened and shifted to a new roadbed. The old road however remains in use until this day as a "improved" dirt road, that is, one that is ocassionally graded and surfaced with some gravel.

Just 6 miles northeast of the town is a spot for water sports, swimming, fishing and camping. It has RV parking space.

Heyburn Lake Park is quite close, to the northeast of Stroud. There are also outdoor recreation spots and State Parks near Stroud (in Tulsa)