Laquey Route 66 attractions are the 1890 Parson’s Store and Post Office and the original 1926 Route 66 alignment, which was bypassed in the early 1930s.

Laquey (pronounced "Lakeway") is a small unincorporated community located on the old 1926 alignment of US 66 in Pulaski County, in the Ozarks, South central Missouri. (Map of Laquey).

Pulaski County was established in 1833, and was named after Kazimierz Pułaski, a Polish patriot who died fighting during the American Revolution War. West of Waynesville westwards towards Lebanon was the Osage Trail, along which Cyrus Parsons, a preacher from Maryland settled after the Civil War.

Parsons set up the Ideuma Baptist Church and a small community formed around it. Columbus Parsons opened a store in 1890 and in 1898 he and Joseph J. Laquey requested the U.S. Post Office to move the post office at Colley Hollow to their store. Thanks to Laquey's political contacts, the post office was moved and named after him: Laquey.

The post office moved out in 1983, but the small community is still alive.

The "Wire Road" built during the 1860s to service the telegraph line from St. Louis to Fort Smith in Arkansas, passed near Laquey, and would become the main road from St. Louis to Sprignfield. It carried traffic from Debruin, close to present Buckhorn, Laquey and then westwards through the now defunct settlements of Bellefonte, Flynn and Francis (which also had post offices at one time) it then crossed the county line passing through Hazelgreen and reaching Lebanon.

The original settlement at Idumea Baptist Church was named after the land of Edom, home of the ancestors of King Herod and was used because of the prophecy referring to Christ in Isaiah 63.

This road through town would become State Hwy. 16 in the early 1920s and U.S. 66 in 1926. However its alignment through Laquey was short lived. In the 1930s, the road was shortened and straightened out (eliminating 90° curves like that in "downtown" Laquey. The town was bypassed and remained dormant.

Where to Lodge in Laquey, Missouri

Accommodation and hotels near Laquey...

> > Book your hotel nearby in Waynesville

More Lodging near Laquey along Route 66

Motels and Hotels close to Laquey

Weather widget for Waynesville the town nearest Laqyet to the east

Rainfall averages 44.5 in (1.131 mm) per year and falls regularly each month in roughly the same amount. Snowfall is around 9 in. (23 cm), and falls between Dec. and Mar.

Laquey is located within the infamous "Tornado Alley"; Pulasky County gets around 8 tornado strikes yearly.

Use Route 66 and the freeway I-44 to reach Laquey, they link the town with Waynesville, Rolla, Cuba and St. Louis to the east, and with Lebanon, Springfield, Joplin, Tulsa and Oklahoma City in the west. Other highways to the west are: US 160, 60 and 65 -through Springfield, and to the east, in Rolla is US 63.

Map of Route 66 through Laquey Missouri

Route 66's alignment in Missouri: the Historic Route 66 through Laquey

Laquey and its Route 66 attractions

Jack DeVere Rittenhouse published his "A Guide Book to Highway 66" in 1946 and in it gives us a good description of the Mother Road in those days. Of course he did not mention the town because it was located on a previous alignment of U.S. 66. Instead he does mention Buckhorn to the east and Gascozark to the west. Regarding the area around Laquey, he says "You are now in the MARK TWAIN NATIONAL FOREST, and entering one of the most beautiful sections of the Ozarks".

This U.S. National Forest was established in 1939, and here, is located to the south of Route 66 between Rolla and Gascozark, including Fort Leonard Wood. It was named after Mark Twain, a Missouri native.

Begin your tour at and County Road P and Old Route 66 (County Road AB), coming from Waynesville and I-44, to the east of Laquey. The more recent (1930s) alignment heads on straight, take a right along Co. Rd. P.

At one time a campground with cabins and gift shop was located on this road, it was named Buffalo Lick Camp, after a salt lick that was frequented by deer and buffalo, located to the south of Laquey. It has gone.

Roughly 0.8 mi. ahead is the Old Parsons' Store and Post Office: 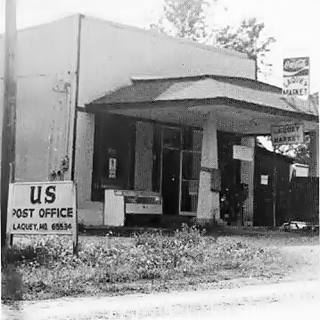 Vintage photo of Parsons Store in Laquey on Route 66 , photo Credits
Click on image to enlarge

This building dates back to 1890 (See its present appearance Pictured above at the top of this page), and was built by Columbus Parsons, who in 1898 petitioned to have the post office moved here.

The old black and white image shows us what the place looked like during the 1960s, then named "Laquey Market", notice the Post Office sign with the zip code (this means the photo was taken between 1963 and 1983 - creation date of zip codes and the closure date of the post office).

Head west a few yards and take a left at County Road AA southwards. Just ahead along Sherwood Lane, to your left is the old Cemetery and Idumea Church established in 1872 by Cyrus Parsons.

The itinerary ends when you reach County Road AB again, which is Route 66. Turn left to return to Waynesville or right to go to Gascozark and Lebanon.

Book your
Hotels close to Laquey:

The first track along the divide in the Ozarks was probably created by roaming buffalo. Centuries later it became a trail used by the Natives, and the trappers and explorers who visited the area after the late 1600s. They called it the "Great Osage Trail" (after the Osage people who lived in the area). During the Civil war period (1860s), a telegraph line was laid from St. Louis Missouri to Fort Smith in Arkansas and it passed near Laquey.

By the early 1900s cars became more common in the countryside but the dirt tracks used by carts were in terrible state: full of potholes during the dry season and muddy traps during the rainy period. John Woodruff lobbied for better roads throgh the Inter-Ozarks Highway Association he presided and this led to the creation of Missouri State Highway 14 built from Springfield to St. Louis, passing through Laquey. Later, in 1926 Route 66 would be aligned along it.

The original alignment is shown in the Map above in Black, it was the first alignment of Route 66 and went through the village.

When the road was paved and "straightened" out to make it shorter, the town was bypassed by what is now County Road AB in the 1930s. This is shown in Pale Blue in the map above.

But this alignment was also bypassed: In 1952 the Missouri Highway Department started work to improve Route 66 to make it safer and shorter, this meant eliminating the winding course in many sections in the county, it bypassed Laquey and all towns in the area. 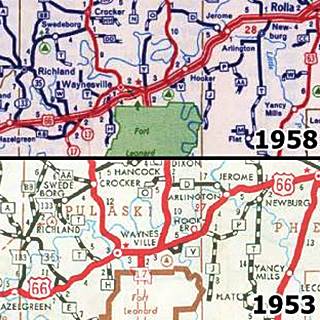 Eventually the whole of US 66 in this area was upgraded into a four lane highway with overpasses, and after 1958 it coexisted with the new interstate I-44 (a state petition in 1962 to name the highway I-66 was denied by the AASHTO). Finally in 1972 the whole of Route 66 had been replaced by the freeway and in 1974 it was decided that the whole of US 66 from Chicago to Joplin would be eliminated. However this was delayed until I-55 in Illinois was completely brought up to Interstate standards. The signs were removed in 1977 but the last segment of the old Route 66 to be bypassed was the section in Powellville, in 1981.