The "Ribbon Road", this is the only remaining 9-foot wide segment of the whole of Route 66. Completed in 1922 it predates the Mother Road by four years and is the original roadbed that became part of Route66 between Miami and Afton, Oklahoma, in 1926.

History of the Ribbon Road 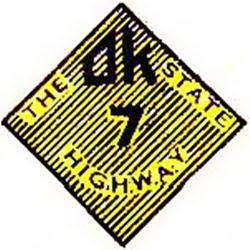 The state of Oklahoma was admitted into the United States in 1907. Its main routes of communication were the railroads. There were few roads and most of them were in poor condition.

With help and subsidies from the Federal government, Oklahoma improved its roads. Among the road building projects was one which resulted in the "Nine Foot wide Road", which originally was Oklahoma State Highway 7.

The Miami - Afton highway (OK hwy 7) was funded by the Federal government under the name of "Project No. 8".

Historic Ribbon Road, US 66 in Oklahoma

It had been approved on December 8, 1918 and divided into two stages. The first one linked Miami and Narcissa, and work began in July 1919 and was completed in March 1921.

The second stage linked Narcissa to Afton and work on the roadbed began in July 1921 and was completed in February 1922.

After 1922, the highway department of Oklahoma intended to continue construction and link it with Oklahoma City via Vinita, Claremore and Tulsa. This would be done in 1926 when Route 66 was created.

The Road that existed before Route 66 was created: 1922

There are three sections of road in Ottawa County that are older than Route 66. They are the following:

The map detail shown below (Rand McNally, 1927), is very interested because it was printed one year after U.S. 66 was created.

We can see the paved (solid red line) Ribbon Road from Miami, through Narcissa (as Route 66). It continues south of Vinita as Oklahoma Highway #7. Which is also paved, all the way to Afton.

Route 66 takes a right and heads west at Narcissa as a dirt road, through Blue-Jacket and then south along a "graded road" to Vinita.

Between Baxter Springs, KS and Miami, OK, we can see that the road seems to go through Picher as the Quapaw section is unpaved. The town of Commerce does not figure in this map.

1927 Map showing the Historic Ribbon Road, US 66 in Oklahoma

The Committee that was organized to define the National Highway system proposed an alignment for Route 66 that incorporated pre-existing roads. The Ottawa County segment of Route66 incorporated Oklahoma State Highway 7. This was approved by the Associated Highways Association of America (AASHO) and that is how the "Sidewalk Road" became part of the brand new U.S. Highway 66 in 1926.

Only in 1935 would construction begin on a shorter and wider road between Afton and Miami. It would have gentler curves (the Ribbon-Road has six 90° curves) and widened shoulders. This new alignment was opened in 1937 and is still used as U.S. 60 - 59.

The Road itself: its features

Western Paving Co., was the contractor that built the ribbon road; their bid contemplated building grade and drain, a concrete base and a Rock Asphalt Surface.

The concrete base was 5 inches thick, and was flanked by concrete edges or "curbs" that can be seen today (the pale grayish white lines that are on each side of the pavement). These are 1⁄2 feet wide.

On the bed a 2-inch thick layer of rock asphalt (also known as "Topeka asphalt") was laid.

The following image shows how the road was built and the dimensions of the roadbed:

Frederick J. Warren was granted the first patents for "hot mix" paving materials. He filed eight patents between 1901 and 1903. These covered "bithulithic pavements", which were a mixture of rocks (aggregate) of certain size ranges to avoid air pockets in the mixture and "bituminous cement" as a binder.

A court ruling in Topeka, Kansas stated that a specific asphalt concrete mix with 7 to 11% bitumen and aggregate sizes smaller than1⁄2 inch, did not infringe Warren's patents. This led to the birth of modern mixes with smaller aggregate sizes known as "Topeka bituminous concrete", the kind used in building the Ribbon Road.

By 1920, Warren's original patents had expired in the U.S.

The peculiar width of the Nine Foot Road

Legend has it that the funds were insufficient and that the engineers chose to build only one lane, nine-feet wide and pave the whole length between Miami and Afton rather than pave half the distance with a regular width road.

Actually the reasons for the unique width of this road are not clear.

Contemporary news reports mention the variable width of the highway as follows: "The first mile, and one-half of the road south of Miami is 18 feet wide, the balance of the road being nine feet in width, with the exception of a three-fourths mile stretch into Afton, which is 15.6 feet."

It is probable that the standard width for a road be two lanes of nine feet each. That they built the road to that specification in the approach to Miami and that they built a similar (but narrower) road in its approach to Afton. The rest of the road was deemed to be less important, and with less traffic, and perhaps a second lane was to be added later.

How to get to the Ribbon Road

Below we describe the access to the Historic road from Miami.

Leave the center of Miami, head south down Main St. but don't turn right at 3rd St., keep on southwards along South Main Street (OK-125). The road will curve towards the west and cross the Neosho River as E St. SW. and then turn again to return to its course towards the south.

Tips: Driving along the Sidewalk highway

During periods of heavy rainfall the gravel that is spread on top of the road surface tends to shift position and form a ribbed surface (corrugated). This in turn makes driving uncomfortable.

The rough road is tough if you have a wide vehicle (RV) a low clearance car (sports car) or motorcycles.

Drive slowly and enjoy the feeling of driving along a historic road.

See the Historic Marker to your left, on the southeast corner of the junction.

Just before reaching I-44, take a right along E-200 Rd and go west along it till you reach S520 Road. Here you once again head south. The original road did not have to deal with I-44, which was built in 1957, but nowadays a bridge takes it across the Interstate. You can see the old segments of the "Sidewalk Road" on both north and south sides of I-44 (The bridge has a slight "S" shape).

After the bridge head straight south, cross the railroad (with care, look out for trains) and merge with the later alignment of Route 66 just east of Afton.

A view of the Historic Road

The marker is a polished pink granite marker. It commemorates the Historic Landmark of the "Ribbon Road" or "Sidewalk Road".

It states that the Route 66 in this section was completed in 1922, as Federal Highway Project No. 8, and that it is listed in the National Register of Historic Places.

Photograph of the Marker and the Historic road

Map of the Ribbon Road

Color Key to the Map of Route 66 "Ribbon Road" section.

You can always check out our Route 66 Map of Oklahoma, with the complete alignment and all the towns.

A Map showing the location

The map with directions

There are several hotels in Miami. Alternatively you can also lodge in the neighboring towns in Kansas, Missouri and Oklahoma:

>> Book your Motels and Hotels in Miami Oklahoma

>> There are two RV campgrounds close to Miami.