Narcissa, a tiny village that is almost a ghost town is sitting on the original Historic 1926 alignment of Route 66, the narrow nine-foot wide section known as the "Sidewalk Road" or the Ribbon Road. There was also a now demolished Historic Service Station and Motel.

A small village just south of Miami, in northeastern Oklahoma, close to Kansas and Missouri.

Narcissa, next to where the D-X Gas Station stood. Looking north along Route 66

The Historic Route 66 goest through the village from North to South.

See Miami, History for full information on the region's history.

Percy Ladd Walker was born in Kansas City in 1849 and he was appointed Federal Postmaster in the Indian Territory which would later become the State of Oklahoma, in 1893.

He was one fourth Wyandotte Indian, but was adopted by the Cherokee Tribe, he served as a member on the Tribal Council.

Walker moved with his wife Mary Mahaney Audrain to what would become Ottawa County in 1868, and by 1885 was well established in what would later become Narcissa.

After 1893 his office was located in Prairie City, close to Fairland OK. His grave is in Fairland (he passed away in 1940).

The Percy's had five children, one of which was Narcissa Owen Walker, born in 1879, it was after her that the town was named.

In the days when Oklahoma was a Territory, prior to becoming a State, this area was the Cherokee Nation. Walker opened a post office opened there on January 15, 1902 (it closed in 1916).

Narcissa was incorporated in 1902 just one year after the Frisco Railroad passed through the region. The Gaines brothers built a grain elevator in what would become the center of the small hamlet. Soon stores opened and a school was built.

Route 66 brought travelers and revenue to the town, one of the Gaines would open a Gas station on the road.

In his 1946 guidebook (A Guidebook to Highway 66), Jack D. Rittenhouse described the town as follows: "Only one establishment on US 66: a gas station with a grocery and a small garage." He noted that Narcissa had about 25 homes, a school and the grain elevator.

It is of Greek origin and means "daffodil", it is the feminine form of Narcissus, the Greek youth who was enthralled by his own reflection, and the origin of the word "narcissism".

Route 66 would become overcrowded and therefore perilous so when the Turner and the Will Rogers Turnpikes linked Oklahoma City and Joplin, Missouri in 1957, the multi-lane highway bypassed the old segments of Route 66, in Ottawa County. Business decreased and the town gradually grew smaller.

There are several hotels in neighboring Miami. Alternatively you can also lodge in the neighboring towns in Kansas, Missouri and Oklahoma:

Find your room in neighboring Miami:

>> There are two RV campgrounds close to Narcissa.

Check the Weather and climate of Miami for historical weather information.

Tornado Risk: Narcissa lies within the "Tornado Alley in Oklahoma and experiences about 9 Tornado watches every year.

Read more about: Tornadoes on Route66.

It is 6.5 miles south of Miami (which, in turn, is the first major town in Oklahoma coming from Kansas). It is 21 miles south of the Kansas state line and Baxter Springs, KS.

Map of Route 66 through Narcissa Oklahoma

See the alignment of US 66 in Narcissa, on our Oklahoma Route 66 Map, it has the complete alignment across the state with all the towns along it.

The color key For Narcissa only is the following:
(for the other parts of the map, check the color key of the map of the corresponding city)

Route 66's alignment in Oklahoma: the Historic Route 66 through Narcissa

Read below for more information on Route 66's alignment in Narcissa.

A Tiny hamlet, nearly a ghost town, remembering the 1920s and the "Ribbon Road" era of Route 66.

Listed the station in the National Register of Historic Places in 2003 - Demolished.

Lot where a historic Service Station and Motel once stood. 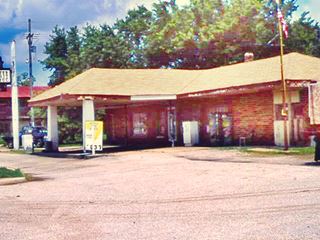 It was the main building in the small village of Narcissa, it was located (it has been demolished) on the eastern side of Route 66 in the center of the town.

The original structure was built around 1910, near the railroad tracks, further west of the current highway.

Route 66 was created in 1926, and the demand for gasoline grew along the road's course, so the owner, Frank L. Gaines decided to move the store to land he owned along the roadside in 1934, where it was rebuilt and expanded. It remained operational until the 1990s.

This became the main intersection in Narcissa.

In 1935 Gaines granted the State permission to widen the narrow (see Ribbon Road) roadway. Work began shortly after and in 1937 the new wide road (current U.S. 69) linked Afton with Miami.

The business would thrive until the Will Rogers Turnpike bypassed the Route 66 segment between Joplin and Oklahoma City in 1957.

The building had a rectangular shape and a hipped roof extended towards the front. It had asphalt shingles and protected the pump filling area. It had a chimney and the complex also included a store and a motel.

This is a 15.46 mile segment that ran between Miami and Afton, and was paved in two sections completed in 1921 and 1922 as part of Federal Highway Project No. 8.

It is the only remaining section with a 9 foot paving along the whole of Route 66.

In fact, it is a very old segment of Route 66: It predates the creation of the highway as it was finished back in 1922, four years before the creation of Route 66. Actually Route66 was aligned along this pre-existing road when it was commissioned in 1926.

It remained in service until 1927, when a wider and safer (as well as shorter) route was opened.

The original Route 66 was pieced together linking different State highways, and these roads had different surfaces, paving and even widths.

The famous "Sidewalk road" or "Ribbon Road" is a very narrow section of the Mother Road. It was used between 1921-22 and 1937 when it was replaced by a shorter and, even more important, wider stretch of road (current U.S. 69) between Miami and Afton.

This section has a paved surface that is only 9 feet wide (2.75 m), flanked by two five-foot gravel shoulders.

The road has sharp 90° curves and can still be driven along. It has been resurfaced but is still operational. There is a marker north of Narcissa next 140 Rd. and U.S. 69 detailing its history.

Photograph of the Marker and the Historic road

>> Click to read about the Route 66: The Ribbon Road

See the nearby places ideal for outdoor recreation and enjoying nature here: State Parks near Narcissa