Commerce is where Hall of Fame baseball star Mickey Mantle grew up, his boyhood home is one block from Route 66. It is also the site of the vintage service stations: Dairy King and Conoco Hole in the Wall, it is where Bonny and Clyde killed a local police Constable in 1934 and the nearest town to the now abandoned and "erased" town of Picher, evacuated due to an environmental disaster.

A small town located just north of Miami, in the northeastern corner Oklahoma, in the Kansas - Oklahoma - Missouri "Tri-state" region.

The Historic Route 66 crosses the town from North to South.

The History of Commerce

See Miami, History for full information on the region's history.

The treaty of 1867 assigned them a piece of land in the northeastern corner of what is now Oklahoma. They moved to the Osage land in 1877 but returned in 1893 to their own territory. There they received the land between the border of Missouri, Kansas and the Neosho River (over 56,000 acres) which they divided among the tribe members.

White settlers soon entered the region attracted by its mineral wealth. What would become Commerce was originally a mining camp which formed there in 1906. Its first name was Hattonville, a name which it took from Amos Hatton, a mining developer who had started zinc and lead extraction at the Emma Gordon mine.

As the mining industry grew, a railroad was built to link it to Miami (1908). A post office was established in 1913, and it was named "North Miami".

The mine was acquired by the Commerce Mining and Royalty Company and the post office soon adopted the name "Commerce".

Shortly after that, the mining company lay out a town (June 1914) which was named after it. A municipal government was established in 1916. The population grew considerably.

Route 66 was created in 1926 and it passed through Commerce on its way to Miami. This brought prosperity and also thieves:

Most Wanted, Bonnie and Clyde, FBI

The early 1930s were violent years: gangsters and bank robbers were very active, and one famous criminal couple, "Bonnie and Clyde", robbed several banks in the Tri-State region between Joplin, Commerce and Miami.

Bonnie Parker met Clyde Champion Barrow in 1930 and after a violent rampage of four years they were shot to death in an ambush in Louisiana on May 23, 1934.

Their downfall began in April 1934, in Commerce.

The fugitive couple and Henry Methvin got stuck in a muddy ditch close to Commerce. Someone who passed by them saw that they carried guns and notified the police at Commerce. The local Chief of Police, Percy Boyd and the Constable William Calvin "Cal" Campbell drove to the spot and as they approached the car, they were received by a barrage of bullets fired by the fugitives. They killed Campbell and wounded Chief Boyd who was kidnapped.

Boyd was released the next day, at Fort Scott, Kansas, 70 miles north of Commerce.

Campbell, a widower was buried in Miami cemetery by his wife, where you can visit his grave.

The manhunt began and it ended with their death in Louisiana. They had been charged of robbery, kidnapping and 13 murders.

The minerals became exhausted and mines closed down in the 1960s. At the same time Route 66 had become unsafe and overcrowded. New highways were built to replace it: the multi-lane Turner and the Will Rogers Turnpikes linked Oklahoma City and Joplin, Missouri in 1957 and this bypassed the old Route 66, in Ottawa County.

Four experienced prospectors and miners J. F. Robinson, Charles Harvey, George W. and A. E. Coleman explored the northern region of what is now Ottawa County in 1905. They sunk several holes and found rich ore which would later become the "Old Chief" mine.

They formed the Commerce Mining and Royalty Company, one of the most successful mining companies in the region. It gave its name to the town it platted in 1914.

There are several hotels in neighboring Miami. Alternatively you can also lodge in the neighboring towns in Kansas, Missouri and Oklahoma:

> > Book your hotel 5 mi away, in Miami Oklahoma

Book your Hotel in neighboring Miami

>> There are two RV campgrounds close to Commerce.

Check the Weather and climate of Miami - Commerce for historical weather information.

Tornado Risk: Commerce is located within the Oklahoma "Tornado Alley and experiences around nine Tornado watches every year.

Read more about: Tornados on Route-66.

It is 5 miles north of Miami (which, in turn, is the first major town in Oklahoma coming from Kansas). It is 10 miles south of the Kansas state line and Baxter Springs, KS.

Map of Route 66 in Commerce, OK

Check out Commerce on our Route 66 Map of Oklahoma, with the complete alignment and all the towns along it.

The map above shows US 66 alignment through Commerce, the color key is the following:

Map with the alignment of Route 66 through Commerce

Route 66's alignment in Oklahoma: the Historic Route 66 through Commerce

Read below for more information on Route 66's alignment in Commerce.

Hole in the Wall Conoco Station

This is a genuine relic of Route 66, a service station that was built right onto a brick wall in the late 1920s. Now known as "Allen's Conoco Fillin' Station".

It is another example of the original generation of gasoline stations that were designed to look like homes, with a cottage style: cute and homely, to reassure travelers and make them feel at home.

The refurbished building is now a shop that sells Route 66 memorabilia and souvenirs. It was a Phillips 66 station in 1938 and was later a Beauty Shop.

Located on the west side of Main Street, just across the road from the "Hole in the Wall" gas station.

It is a good example of a building that has been restored and converted to a new purpose while preserving its historical Route 66 vintage appearance.

It used to be a Service Station of the Marathon Gas company. And its style is that of a cottage with a red gabled roof and a flat canopy over the area where the gas pumps once stood. A large neon light ice cream cone decorates the front sector under its roof.

Mickey Mantle (1931-1995) was a Hall of Fame - World famous New York Yankees baseball player, nicknamed "The Commerce Comet". He was born in Spavinaw, Ok, but his family moved to Commerce when his father, Mutt, got a job as a miner in the town.

Mantle lived there between 1934 and 1944, and it was in this house that he learned the art of switch hitting from his father and grandfather. 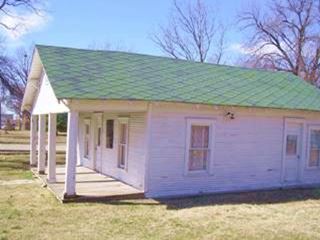 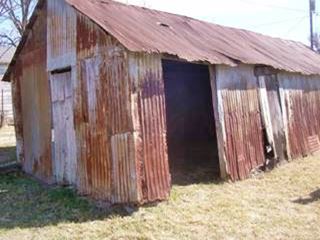 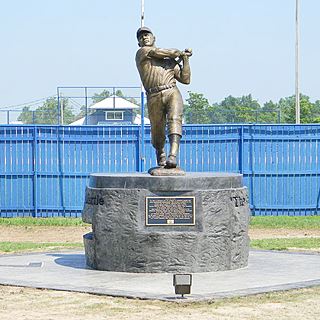 The site has a typical mining community home of the early 1900s and has a wood siding facade. Next to it is the garage, which was used by Mantle as a backstop for his daily hitting lessons after school. It still sports its original galvanized steel facade, rusty and corroded it displays the dents caused by Mantle's baseball shots. It even retains the slight inclination that Mantle fondly remembered.

This is a 900 lbs. and 9 foot tall statue mounted on a pedestal that is 5 feet tall. The field and the statue are behind Commerce High School. Best access: US 69 (M. Mantle Blvd.) drive past (head southwest) the baseball diamond it is on the north side of the road, you will see the statue. Take a right and park. A path leads to the statue.

There are some very interesting landmarks, sights and scenic places close to Commerce:

Visit the nearby towns of Afton (20 miles south) and Miami (5 miles south), with their "Route 66" sights & attractions.

And of course, the "Ghost Town" of Picher, now erased from the maps... and Quapaw, the "last town in Oklahoma along Route 66".

Picher the most toxic place in America

Head north from Commerce towards Quapaw, take a left along US 69. The former town is just before the KS-OK border.

See the Street View of this same place today

Picher is now a ghost town but it used to be a city in Ontario County and was one of the major mining areas in the Tri-State Mining region.

Almost one century of mining had a heavy toll on the community: A local creek turned red in 1967, dyed by the contaminated water from the mines and the gigantic piles of mine tailings or "chat" that towered over the town were laced with large amounts of toxic heavy metals which leeched into the groundwater.

The area was declared the "Tar Creek Superfund" site in 1981, but the residents stayed put even though 34% of their children had lead poisoning.

However, when the Army Engineers found in 2006 that the town was at risk of collapsing because 86% of the buildings were undermined by subsurface mine shafts was action taken.

Authorities decided to evacuate it and declare it uninhabitable: Picher and neighboring Treece and Cardin were found too toxic to clean up so a federal buyout paid residents to leave. An F4 tornado hit the town in 2008 and destroyed 150 homes. The town was doomed: it was dis-incorporated on September 1, 2009.

The town (excluding historic buildings) was demolished and the municipality of Picher was officially dissolved on November 26, 2013.

Picher was named after O.S. Picher, owner of the Picher Lead Co. Mining began there in 1913 and the town was incorporated in 1918. It reached a maximum population of 14,252 residents in 1926.

Mining declined and ceased by 1967 but over 100 million tons of rock, sand and sludge taken from the 14,000 mine shafts remained behind.

On the bridge of E 57 Rd., over Spring River, close to Quapaw.

Book your Hotel nearby:

Leave Commerce and head north along Route 66, after 5 miles, you will reach the southern part of Quapaw. The road curves left into the town along S. Main St. Keep straight eastwards along E 50 Rd., drive through Lincolnville and turn right on S630 Rd. The road will become E 57 Rd, and cross Spring River (8.2 miles).

You will see, on the west bank of the River, right to the north of the bridge two rock buffs, known as "Lovers' Leap".

The local legend tells about young Indian warrior who fell in love with a girl of the Quapaw tribe, but the maiden's father asked for a large payment for his daughter's hand. The lovers eloped but their escape was discovered and the angry Chief sent a party to capture them. The couple knew that they would be put to death if caught, so they chose to die together by jumping off the rocky cliff which is now known as "Lovers' Leap" or "Devil's Promenade"

The Indian lover's myth blends with another local myth, the "Spook Lights" legend:

A local phenomenon called Spook Lights is said to be caused by the nightly return of the young couple's ghosts to the spot where they died.

The Tri-state corner area, where Missouri, Kansas and Oklahoma meet is the site of a mysterious phenomenon known under various names: "spook lights", "ghost lights", "Indian lights" and "Hornet lights" (after the town of Hornet, Mo.)

Getting to Spook Lights

> > Click to read about the Spook Lights on Route 66

Learn more about alignment of Historic Route-66 through Oklahoma and the famous nine-foot wide "Ribbon Road".

See the nearby places ideal for outdoor recreation and enjoying nature here: State Parks near Commerce

Bonnie and Clyde in Oklahoma, Oklahoma Dept. of Libraries.