Afton is at the southern tip of the 1926 alignment of Route 66, the narrow "Nine-foot section" or "Ribbon Road". Stop by at its famous Buffalo Ranch and Vintage Motels like the Acme Courts, enjoy its restored Afton D-X Station.

Afton is located just south of I-44 on U.S. 66, in Ottawa County, northeastern corner of Oklahoma. Route 66 crosses it from east to west.

The name Afton comes from a river in Ayrshire, Scotland, "River Afton" or "Afton Water". It became quite popular in a poem by Robert Burns (1759 - 1796) which in turn led to several American towns to be called after Afton.

One version is that a Scotsman named Anton Aires who was a railway surveyor named the station after his daughter (Afton).

Afton was a stop on the Atlantic and Pacific Railroad Company, which later became the St. Louis and San Francisco Railway ("Frisco") which laid its tracks through the region in 1871. A post office opened in 1886. A second line, the Kansas City, Fort Scott and Memphis Railroad opened a second line in 1901. A railway repair shop was built and the town flourished with its farming and railroad activities.

Route 66 was created in 1926 and its alignment included the nine-foot wide "Ribbon Road" which linked Afton to Miami as OK-7. This new highway link brought an inflow of travelers and more prosperity.

Motels, Courts and filling stations were built to cover the needs of these travelers. The Pensacola Dam was completed in 1940 and it created Lake O' Cherokees, which was also a tourist attraction.

However the railroad repair shop in Afton was closed and its roundhouse demolished in the 1930s. and as Route 66 became crowded and unsafe, a new highway was built and completed in 1957: the Will Rogers Turnpike or Interstate 44. It bypassed the town and relegated it to oblivion.

Today Afton is a classic example of "Small Town America" with Route 66 running down its Main Street among early 1900s buildings, with the shells of vintage motels, hotels and Gas Stations. You can even drive the historic "Ribbon Road" with its 1926 alignment of Route 66.

There are several hotels in Afton. Alternatively you can also lodge in the neighboring towns in Kansas, Missouri and Oklahoma:

> > Book your Hotel in Afton Oklahoma

Book your room close to Afton:

>> There are two RV campgrounds close to Afton.

Read more about: Tornados on Route-66.

Map of Route 66 through Afton Oklahoma

Check out Afton on our Oklahoma Route 66 Map, with the complete alignment and all the towns along it.

Route 66's alignment in Oklahoma: the Historic Route 66 through Afton

Read below for more information on Route 66's alignment in Afton.

The 1946 classic written by Jack DeVere Rittenhouse's "A Guide Book to Highway 66" tells us about Afton in those days after World War II: "... Pop. 1,261... Baker's Cafe; Northeast garage and Eagle Service Station Garage; Acme Court". Of these, Acme Court has survived. 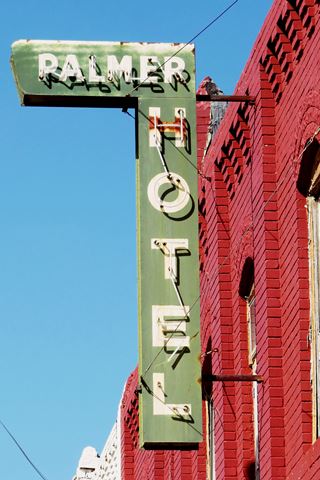 Drive into town along Route 66 from the north (Miami) heading west towards Vinita and you will see the following sights:

Buffalo Ranch was a Trading-Post opened by Russell and Aleene Kay in 1953. As an additional attraction they decided to raise bison (American buffalo). Their Western store included a restaurant and ice cream parlor (the "Dairy Ranch", which they sold to Betty Wheatlye in 1958, who ran it until 2000).

The buffalo were a real crowd-drawer. Eastern folks would stop to see these typically Western animals.

Russell died in 1963, and despite slacker business after I-44 opened in 1957, his wife ran the ranch until her death in 1997. The store closed, the property was auctioned and the premises demolished in 2002. A new building was erected on the site.

The new place is a convenience store and restaurant open 24 ⁄ 7.

Side Trip & Tour: Head west along Route 66 towards Afton, after 1.1 miles you will reach:

The Ribbon Road or Nine-Foot-Section of Route 66

On the right side of the road, at S520, is the southern terminus of the nine-foot wide or "Ribbon Road" (also known as the "Sidewalk Road"), the original 1926 alignment of Route 66, you can drive along it northwards.

The original Route 66 was pieced together linking different State highways, and these roads had different surfaces, paving and even widths.

The famous "Sidewalk road" or "Ribbon Road" is a very narrow section of the Mother Road. It was used between 1921 and 1937 when it was replaced by a shorter and, even more important, wider stretch of road (current U.S. 69) between Miami and Afton.

This section has a paved surface that is only 9 feet wide (2.75 m), flanked by two five-foot gravel shoulders.

The road has sharp 90° curves and can still be driven along. It has been resurfaced but is still operational. There is a marker near Narcissa next 140 Rd. and U.S. 69 detailing its history.

Listed in the National Register of Historic Places in 1995

It was built in 1936 by Pharaoh & Co. as part of the Public Works program during the Great Depression. It is unique because it has two pedestrian walkways protected by concrete guard rails (see yellow arrows in the image below).

The concrete bridge with steel girders has three spans and a total length of 143 ft.

Planners had expected the town to grow eastwards... but it didn't.

Tour: in the town of Afton

The old and now closed hotel is just ahead, on the north side of Main Street just after Mulberry Ave.

12 SE First Street, OK. just after S. Locust Ave., on the left side of the road. Check their website

Open seven days a week in summer and Friday through Sunday in winter. From 9:30 a.m. to 3 p.m. 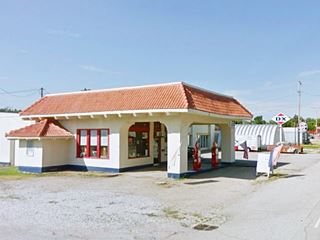 The original service station was built in the mid 1930s and sold different brands of gasoline over the years.

It was the first 24-hours filling station on Route 66 and it shared customers with two other service stations in central Afton.

In the 1980s it still sold gasoline (D-X brand), but later closed. In 1999 it was purchased by former Connecticut residents Laurel and David Kane, who restored it.

Now it is the privately owned Afton Station Packard Museum, and the building houses a collection of classic cars, most of them Packards as well as Route 66 memorabilia.

You will find items from the defunct Buffalo Ranch Trading Post and plenty of information for travelers (maps, guidebooks and tips).

Unfortunately the Cities Service Station which was built in 1933, was demolished after it was listed in the National Register of Historic Places.

It was an innovative building as it had two restrooms for its customers, in a period where many service stations had none. It was a Mission Revival style building with a facade of rough textured stucco.

Route 66 and S. Monroe Ave. On the north side of the road

John Foley opened Avon Court in 1936 it has seven units each of them with a covered carport. It was operated by W.R. Trebilcock between 1951 and 1955. Harry Glover ran it until 1958. See a Google Street View of the motel.

Many online sources make the mistake of saying that the Avon and the Acme were the different names for the same place, this is not true. They were different businesses.

In front of Avon Court, on the south side of the road.

US Post mail carrier Sullivan W. Johnson (1889-1962) and his wife Euretha Mae (1896-1976) chose the western part of Afton to open their Acme Courts in 1936. They had a Conoco Gasoline station next door. The postcard pictured below, from the period 1940 - 1949, informs on its back that: "The ACME COURTS provide the best in strictly modern over-nite cottages. A clean, comfortable place for you and your family. Play-ground for children. Reasonable rates. Our slogan - "You must be satisfied." Conoco Bronz-z-z Gasoline - New Nth Motor Oil.".

Other Motels and Cafes 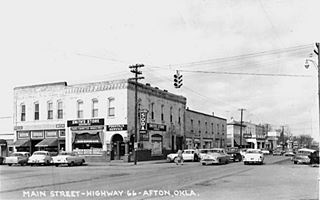 The Rogers Motel (See a Postcard of the motel) was located on 1st St. (and S. Walnut) and its correspondence had the slogan "You are a stranger here but once". It was open at least until the 1970s.

Bassett's Food Store which closed in 2009 after operating for half a century was located in a building which was in the early 1900s was built for the Pierce Harvey Buggy Co. It is on the Corner of 1st. St. and S. Main Ave.

The Palmer Hotel, was next to the Palmer and Shelton Furniture Store in a building built in 1911. It was run by Alvin and Lulu Malone between 1952 and 1991, when it closed. The sign and brick facade can be seen on the north side of the road in the downtown area.

Clint and Lillie Baker opened their Baker's Cafe in 1932 on Main St. They sold it in 1947. Clint then opened Clint's Cafe which was "Famous for Food" it changed its name to "Davis Cafe" in the 1950. Later it was the "Linda McCloud's Route 66 Cafe" which burned down in 2009.

Gray Garage and Service Station on the southwest corner of S. Maple and U.S. 66, (Street View).

Another vintage motel (sign is still there) is on the south of Route 66 at S. Downing Ave. (southwest corner).

There are some very interesting landmarks, sights and scenic places close to Afton:

Visit the nearby towns of Miami (15 miles north) and Commerce (20 miles north), with their typical Route 66 attractions.

Har-Ber is a pioneer-era village and museum located on the shores of the Grand Lake O' The Cherokees.

It recreates a mid 1800s village with crafts and trade demonstrations, antique exhibitions and more. Experience the life of the early settlers.

It has many historic buildings that were relocated there and many replicated buildings.

The Tri-state corner area, where Missouri, Kansas and Oklahoma meet is the site of a mysterious phenomenon known under various names: "spook lights", "ghost lights", "Indian lights" and "Hornet lights" (after the town of Hornet, Mo.).

They are seen at night and float around, flicker, twinkle, come and go, glowing in the dark.

>> Click to read about the Spook Lights on Route 66

From Afton you can drive along the Route 66: The Ribbon Road, north, to Miami.

See the nearby places ideal for outdoor recreation and enjoying nature here: State Parks near Afton