Caffeyville was once a small village on old Route 66 which was razed to make space for four-lane US-66 in 1957. Today nothing remains but two icons: McClary Motel, gas station and cafe and a former gas station and cabins.

Caffeyville is a tiny unincorporated community on the old alignment of Route 66 in Laclede County at I-44 Exit 123, south central Missouri. (Map of Caffeyville).

Some old cabins on Route 66 in Caffeyville Missouri

Read about the region's history in our Lebanon page (County seat, 6 mi. north of Caffeyville).

Laclede County was created in 1849 and named after French explorer Pierre Laclède, the founder of St. Louis. In 1870, the South Pacific Railroad laid its tracks just west of Caffeyville and the area was sparsely settled.

The original Native American trail along the divide in the Ozarks was known as the "Great Osage Trail" (after the Osage natives). During the Civil war period, a telegraph line was laid from St. Louis Missouri to Fort Smith in Arkansas and was known as the Wire Road. Later the line was removed and it became State highway 14. This road was later improved and became U.S. 66.

Traffic flowing along the new highway attracted entrepreneurs and one of them named Jessie Floyd Caffey owned a gas station here.

It thrived with some cabins and gas stations until Route 66 was upgraded, widened and straightened from Lebanon to Strafford in the 1950s. By 1956 work reached Caffeyville and the buildings were demolished to make space for the exchange and overpass. This marked an end to the town, as the traffic now flowed swiftly along the freeway. Later US 66 was absorbed by I-44 and decertified.

Where to Lodge in Caffeyville, Missouri

> > Book your hotel in Lebanon

More Lodging near Caffeyville along Route 66

Motels and Hotels close to Caffeyville

>> Check out the RV campgrounds in neighboring Lebanon

Weather widget for Lebanon, the town nearest Caffeyville, to the east

Caffeyville is located in the "Tornado Alley" and Laclede County has around 8 tornado strikes per year.

Map of Route 66 through Cafeyville Missouri

Route 66's alignment in Missouri: the Historic Route 66 through Caffeyvile

Caffeyville and its Route 66 attractions 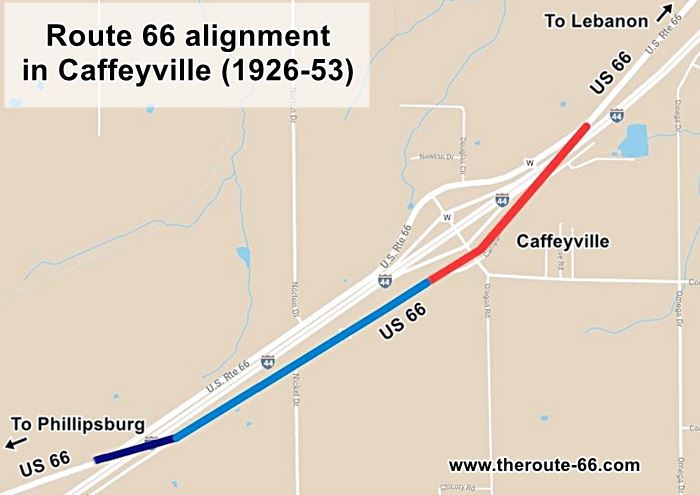 A 1943 USGS map with Caffeyville and that same location today. A. Whittall

The 1946 book by Jack DeVere Rittenhouse, "A Guide Book to Highway 66" gives us a good idea of the Mother Road during its heyday. And Rittenhouse did mention this town, although he spelled the name incorrectly, writing: "... is CHAFFEYVILLE, a small hamlet consisting chiefly of a gas station, cafe and a few cabins". It was preceed (1 mi. east) by "gas station and cabins" and followed 1 mi. west by "Gas and Cabins". The town is now gone but those two sites east and west, survived.

Tour the route 66 landmarks near Caffeyville

This is the location map of the former motel, cafe and gas station.

The place is now a private residence and it was operated by McClary until the freeway opened which led to a drop in traffic and customers.

The images below show a postcard ca. 1940s and its current satellite view. Number (1) shows the former café with the gas pumps to the left, which is still standing though the pumps are gone. Behind it was the motel shown at (2), now gone, but as you can see in the satellite view, the concrete foundation survived, behind a modern building.

Click on the images to see a larger view. 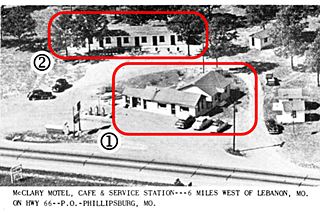 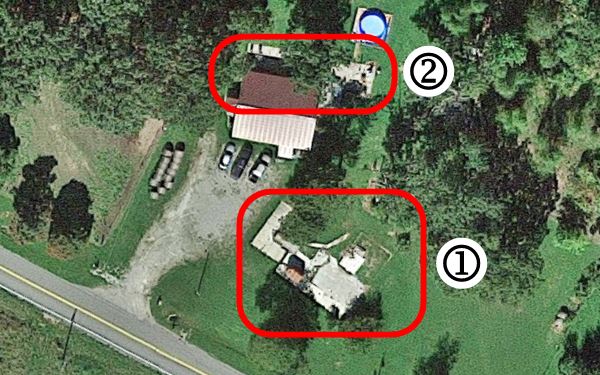 Now head west to see some old cabins and a former gas station:

On the eastern side of the road. These cabins pictured above at the top of this page, were mentioned by Rittenhouse. Two of them can be seen, located at the back of the property, as you can see in the photograph. The gas station is probably the structure located on the northern tip of the property.

This is the end of the tour, you can head south to Phillipsburg along the old Route 66.

Book your
Hotels in neighboring Marshfield or Lebanon:

The original alignment is shown in the Map above in Pale Blue, and was a winding course between Strafford and Lebanon, right through the village.

In 1952 the Missouri Highway Department started work to improve Route 66 to make it safer and shorter. It built a completely new road to the east of the original one from Lebanon to Phillipsburg. This highway had four lanes with overpasses. Its construction at Exit 123 led to the removal of most of Caffeyville's buildings. After 1958 it coexisted with I-44 until it was finally decertified around 1979.

The map above shows Route 66 between Lebanon and Springfield in 1957. I-44 had not yet been built and US 66 was a divided highway that almost reached Strafford. The older alignment of Route 66 from Lebanon to Phillipsburg does not even appear in the map, nor does Caffeyville.