Present view at the same place the 1956 photo was taken. Now the newer alignment of Route 66 is I-44

Read about the region's history in our Lebanon page (County seat, north of Phillipsburg).

Laclede County was established in 1849 and was named after Pierre Laclède, who founded St. Louis. The South Pacific Railroad surveyed the area and built the railway, setting up a station there. A post office opened in 1871 and was named Phillipsburg.

Named after a local merchant, Rufus Phillips it combines his surname with "burg": town, village.

The surname "Phillips" comes from "Phillip", a Greek word "Philippos" (from "philein": to love, and "hippos": horse)

The main road from St. Louis to Sprignfield passed near the town (Wire Road), and many years later it became Route 66 (created in 1926) which ran 0.4 miles west of the railway station. The traffic along the road was served by gas stations and cafes ran by the locals. In the early 1950s the highway was realigned and widened into a four lane expressway that bypassed the village completely.

Rittenhouse mentions the "Wire Road" in his 1946 book on Route 66, named so "... because the military telegraph line which ran along it... in his time, some remains of the old poles remained standing.

The original trail along the divide in the Ozarks was probably created by roaming buffalo. Later the natives used it and after them the trappers and explorers, who named it the "Great Osage Trail" (after the Osage natives). During the Civil war period, a telegraph line was laid from St. Louis Missouri to Fort Smith in Arkansas and here it overlaps old Route 66. From Lebanon to Phillipsburg, to the west, the telegraph drifted away from Route 66.

The old "Wire Road" kept its name even after the line was removed.

Where to Lodge in Phillipsburg, Missouri

> > Book your hotel in Marshfield

More Lodging near Phillipsburg along Route 66

Motels and Hotels close to Phillipsburg

>> Check out the RV campground in Phillipsburg

Phillipsburg is located in the "Tornado Alley" and Laclede County has around 8 tornado strikes per year.

You can reach Phillipsburg along historic Route 66 and Interstate I-44 that links it with Springfield, Tulsa and Oklahoma City in the west and with Lebanon and St. Louis in the east. US 160, 60 and 65 run to the west, through Springfield.

Map of Route 66 through Phillipsburg Missouri

Route 66's alignment in Missouri: the Historic Route 66 through Phillipsburg

Route 66 in the Ozarks

Phillipsburg and its Route 66 attractions

Jack DeVere Rittenhouse published his "A Guide Book to Highway 66" in 1946 but in it, he does not mention Phillipsburg, instead, after Caffeyville he does tell us about: "Gas and Cabins" 1 mile north of Phillipsburg, which must surely be the Old service station north of town and, again, 2 miles north, "Gas and Cabins", which is no other than the Carter & Lawson’s Underpass Cafe and Service Station. Followed one mile west by "Roadside park [to the left], with tables and fireplaces for picnicking" this is the Route 66 Roadside Park, with a "Gas station nearby" (Old service station south of town).

Tour the route 66 landmarks in Phillipsburg

Start your tour at the junction of Pine St. and Old Route 66. Take a left along Pine St. eastwards and drive just 0.2 mi. to visit the Old General Store: 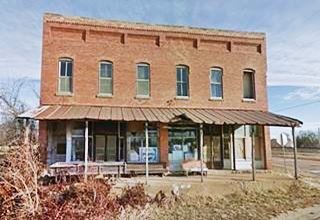 This two-story brick building located on the corner by the former railway station was built around 1880. It was also the lodge hall of the I.O.O.F., (The Independent Order of Odd Fellows), a secret society without any political or sectarian orientation. It was founded by Thomas Wildey in Baltimore, USA in 1819 (Curious? Check their website).

Don't miss the Ghost sign of a soda water advertisment on its eastern facade or the remains (northeastern tip of the old building) of the Farmers State Bank which opened in 1906 and closed during the Crash of 1929. See a vintage photo of the Store.

Retrace your steps and head east, towards St. Louis along Route 66, and 0.2 mi. away next to Exit 118, it is on your right Map with directions

View of Redmon’ from the freeway, Phillipsburg MO. by Redmon&rsquo. Click for Street View

Proclaimed as "World's largest gift store" is is a bit of Americana next to old Route 66. Candy kitchen with chocolate and homemade fudge. www.redmonscandy.com.

Leave Redmon's along Old Route 66 eastbound, cross the Freeway and take a left to visit an Old Service Station: 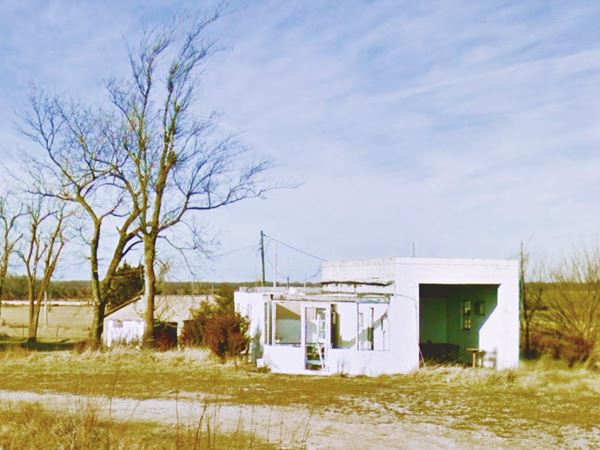 See the gravel drive, a one bayed garage and a small office, now roofless, facing what used to be Route 66 (Cut here by I-44) shown in Black in the Map above.

Head east along Hwy W, towards Lebanon and 0.5 mi. away, to your left is the old Carter & Lawson’s Underpass Cafe and Service Station:

The gas station opened in 1941 and was owned by Edward Lawson and O. E. Carter. they chose a spot just past the Frisco railway overpass (that is still there, spanning Route 66), it was a low bridge with a 13’ 5" clearance. They then added a café which can still be seen and is pictured below:

Below is a view of the remains of the former cafe:

View of the former Underpass Cafe and gas station

Vintage postcard of the Underpass Cafe and Service Station

Return to your starting point on Pine and Hwy. CC and take a right, westbound towards Conway and Springfield.

To your left, you will see a long building with two garage doors and a former office to the right and one garage door facing south. In front of the office is the outline of the concrete gas-pumps foundation.

View of an old gas station, just south of Phillipsburg

0.2 mi. west of the service station. See Map with directions.

This former roadside park was mentioned by Rittenhouse in 1946, as having tables and fireplaces for picnicking. In the late 1950s as you can see in the map below, published in 1957 it was still a park (marked by a green pine tree icon), nowadays only a concrete marker remains; it mentions that the land was donated by Maud G. Snyder for that purpose.

It is located to your left; Street View of the marker.

This is the end of the tour, you can turn back or head south towards Conway.

The mythical Bigfoot (also known as Sasquatch), the ape-man was reported here during Christmas 2014. Does this simian creature live in the forests near Route 66? Read the Bigfoot sighting press article.

Book your
Hotels in neighboring Marshfield or Lebanon:

The original alignment is shown in the Map above in Pale Blue, and was a winding course between Strafford and Lebanon, just west of Phillipsburg. The Black segment in the map is where the later Route 66 alignment (see below) and after that I-44 sliced across the original route.

In 1952 the Missouri Highway Department started work to improve Route 66 to make it safer and shorter. It built a completely new road to the west of the original one that was upgraded into a four lane highway with overpasses, after 1958 it coexisted with I-44 until it was finally decertified around 1979. There was an exit close to Phillipsburg which saved it from the fate of neighboring ghost town Sampson and the section shown in Green in the map is the one that links the oldest aligment across Exit 118 through Phillipsburg, bypassing the "cut" in the 1926-1953 alignment.

The map above shows Route 66 between Lebanon and Springfield in 1957. I-44 had not yet been built and US 66 was a divided highway that almost reached Strafford. The older alignment of Route 66 had been redsignated as MO-CC between Phillipsburg and Marshfield, and to the north, it is State Highway W into Lebanon.