Bushyhead is a tiny town that is located on Route 66, six miles south of Chelsea, Oklahoma.

Route 66 crosses the community with a notheast to southwest course.

See Chelsea, History for full information on the region's history.

The post office opened in April 1898, and remained operational until 1955.

Today it is an unincorporated community and census-designated place (CDP) in Rogers County. 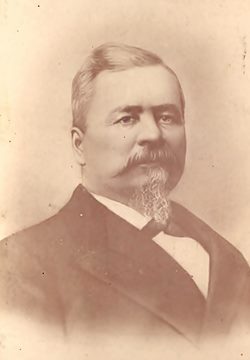 A Scotsman, Capt. John Stuart settled in the Colony of South Carolina in 1733 and enlisted in the British army. As a soldier he was captured at Fort Loudon, Georgia in 1760, but hte Cherokee spared his life.

He then became the British Indian Agent for the tribes located to the south of the Ohio River. It was there that he met and married Susannah Emory, a Cherokee.

The Cherokees called him "Oo-na-du-to", which meant "Bushyhead" because of his thick blonde hair.

His only son was also known Oo-na-du-to or Bushyhead. He married Nancy Foreman, who was a half-blood Cherokee.

Nancy would later migrate during the "Removal" of the Cherokees to the west of the Mississippi River, led by her son, the Reverend Jesse Bushyhead, in 1839.

Dennis would play an important role in the life of the Cherokee Nation: he was elected chief of the Cherokees on October 4, 1879 for a four year term, and reelected again in 1883, serving for a total eight years.

He retired to is home in Tahlequah, where he passed away and is now buried.

The town is named Bushyhead in his honor.

Chelsea just north, and Claremore to the south drew population during the depression and although Route 66 passed through the town, it had little impact in its economy.

There are several hotels in neighboring Vinita and Claremore north and south of Bushyhead. Below we list some towns along Route 66 close to Bushyhead in Oklahoma:

Book your hotel in neighboring Vinita

>> There are three RV campgrounds near Chelsea - Bushyhead.

Check the Weather and climate of Chelsea for historical weather information.

Tornado Risk: Bushyhead lies within the "Tornado Alley in Oklahoma and experiences about 8 Tornado watches every year.

Read more about: Tornadoes on Route66.

The town is 6 miles southwest of Chelsea.

To the southwest, along Route 66 are Foyil and Claremore.

Map of Route 66 through Bushyhead Oklahoma

See the alignment of US 66 in Bushyhead, on our Oklahoma Route 66 Map, it has the complete alignment across the state with all the towns along it.

Route 66's alignment in Oklahoma: the Historic Route 66 through Bushyhead

Read below for more information on Route 66's alignment in Bushyhead.

Rittenhouse in his "Guidebook to Route 66" published in 1946 mentioned that it had "gas and grocery on US 66; no other facilities..." he added that there was "An old indian lookout west of here".

The town is an open rural community with no major landmarks.

This event which included Pasture Roping and Barrel Race had been a long standing event on Route 66 (since the 1980s). In 2010 it moved to Bristow, Okla. leaving its Route 66 venue after the death of its creator and promoter Clem McSpadden.