Foyil is a small town on Route 66, claims to have the "The World's Largest Totem Pole". It is also the hometown of Andy Payne, who won the first Transcontinental Footrace from Los Angeles to New York (part of it along Route 66), in 1928.

Foyil, Andrew Payne Monument and behind it Route 66

Route 66 crosses the community with a notheast to southwest course.

See Chelsea, History for full information on the region's history.

The first settler in what would later be Foyil was Alfred Foyil. He had been a Confederate soldier and courier during the American Civil War, and he moved into the Indian Territories (which later became Oklahoma) in 1875. He married the daughter of one of the leading Cherokee families and worked hard to build a log cabin and clear the land for a farm in Redland. He later became quite wealthy and move west, to another site just north of Claremore, where he established another farm.

The town got its name from its first inhabitant, Alfred Foyil. But the surname is quite peculiar. It is found in the US, in the Arkansas and Oklahoma after the 1840s. Perhaps it is a deformation of Foyle which in turn is an English surname derived from the Old French word "fouille" which means "pit".

A post office opened on his land in 1890 and he became the first postmaster. The town developed around it. He also ran the local general store.

A drugstore opened in 1898, a bank in 1905 and that same year, the town was incorporated. By 1911 it even had newspapers, a hotel and two physicians. The creation of Route 66 in 1926 brought some prosperity to the small community but the Great Depression and the Dust Bowl hit it hard.

There are several hotels in neighboring Vinita and Claremore north and south of Foyil. Below is a list of lodging in towns along Route 66 close to Foyil:

Book your hotel in neighboring Vinita

>> There are three RV campgrounds near Chelsea - Foyil.

Check the Weather and climate of Chelsea for historical weather information.

Tornado Risk: Foyil lies within the "Tornado Alley in Oklahoma and experiences some 8 Tornado watches every year.

Read more about: the risk of Tornadoes on Route66.

It is 9 miles southwest of Chelsea.

To the south, along Route 66 are Secuoyah and Claremore.

Check out Foyil on our Route 66 Map of Oklahoma, with the complete alignment and all the towns along it.

Color key of the map mentioned above is:Pale Blue: shows the Historic Route 66 alignment in Foyil.

Map with the alignment of Route 66 through Foyil

Route 66's alignment in Oklahoma: the Historic Route 66 through Foyil

Read below for more information on Route 66's alignment in Foyil.

In his 1946 work "Guide Book to Highway 66", Jack DeVere Rittenhouse described the whole of US 66 and mentioned Foyil as follows: "(Pop. 170; gas; small garges; groceries; no cafes or courts.) A small hamlet serving the farms and cattle ranches of the region"

Foyil has the "The World's Largest Totem Pole". It is also the hometown of Andy Payne, who won the first Transcontinental Footrace from Los Angeles to New York (part of it along Route 66), in 1928.

The monument is set in a park between Route 66 and the Andy Payne Blvd. A bronze statue depicts Andy Payne running on the epic 1928 Transcontinental Race which he won. It is a Historic Oklahoma Marker.

There is also a marker on the corner of E 4th St. and Poplar St. (East side of US 66) which commemorates the 1928 footrace.

He was a member of the Cherokee tribe, he was raised in Foyil, Oklahoma. During the 1928 Trans-America Footrace, which he won, he passed through the town.

He loved running, and practiced every day running the 5 miles that separated his family's farm from Foyil school.

Payne had studied and graduated from Foyil's High School, and later earned a law degree in the Oklahoma City University. He served in the US Army and later worked for almost half a century as Clerk of the Oklahoma Supreme Court.

Most of the race took place along Route 66.

Only one in four of the original runners made it to the Madison Square Garden's finish line (over 275 had started out in Los Angeles but half of them had dropped out by the fourth day).

Payne used the prize money to pay off the mortgage on his father's farm.

Pyle was a theater owner and an entrepreneur who organized the event, and ended up almost broke after it ended (he took one week to pay the prize money to the runners).

He enlisted some professional runners, like English hundred-miler Arthur Newton and Estonian marathoner Juri Lossman. The group also included a Hindu philosopher who chanted as he ran and an Italian who raced singing arias. 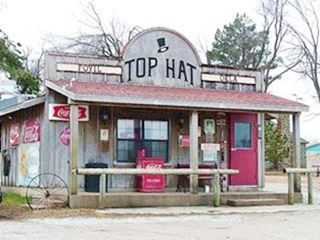 He had the towns along the race route pay a fee, if they did not pay, they were pypassed (the course of the race was therefore quite odd). Racers were preceded into the towns by Pyle's footrace carnival which included a five-legged dog and the embalmed remains of a Far West outlaw.

The building (from the early 1970s) is now closed, but standing.

See this Map with the alignment.

The original segment of Historic Route 66 through Foyil is now Andy Payne Boulevard (the modern four laned highway is a later addition). It was paevd with Portland Cement Concrete and has a pink hue to it. 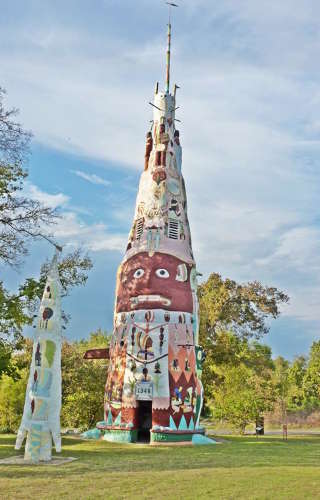 Listed in the National Register of Historic Places, 1999

Head north of Foyil along route 66 until reaching Route 28A, take a right and after 4 mi., on the right side of the road is the Totem Pole Park. This is the Map with directions.

Nathan Edward "Ed" Galloway (1880 - 1962). He was born in Springfield Missouri and learned to carve wood as a boy and was a proficient craftsman. He worked at an orphans' home in Sand Springs, near Tulsa, Oklahoma teaching manual arts to the boys there.

He crafted violins and furniture which he displayed in his eleven-sided "Fiddle House" (built for that purpose), now it is a museum and gift shop.

Inspired by post cards and the National Geographic magazine, Galloway began working on the Totem Pole after he retired in 1937 to his 14 acre property north of Foyil. He finished his work in 1948. He did it because he wanted to have something to keep him busy and because he believed it may be an attraction for Boy Scouts to visit.

The Totem Pole has an internal structure of red sandstone framed with steel, scrap metal and wood which is covered with concrete. It is hollow, and has an internal ladder climbs the nine floors to the top of the structure.

The totem in numbers

The ground floor is 9 ft. in diameter and its plastered interior is covered with painted murals. The top floor cone is open to the sky.

He did most of it himself, by putting in full work-days from sunrise to sunset. He kept on working in his other creations right up to his death.

The outer part of the structure is carved with bas-relief motifs and painted with bright colors; it depicts lizards, owls, Native American chiefs with their feather head dresses.

The base of the Totem Pole is a turtle carved from a sandstone outcrop.

The other sculptures and totems

There are totem picnic-tables with seats, and a totem barbeque. Bird shaped gateposts and a Fish-Arch gateway.

After his death, the Totem Pole began to deteriorate and it would take almost three decades for action to be taken: The concerted action of the Rogers County Historical Society (which bought the property in 1989), the Kansas Grass Roots Art Association and the Foyil Heritage Association restored the sculptures and repainted them.

It is the largest concrete totem pole. There are others, carved in wood, that are contenders: the 173 ft. tall (made from three sections) totem at Alert Bay, British Columbia, Canada. Also the Kalama, Washington, Chief Lalooska pole made from one single piece of wood: 140 ft. tall, but not made by Natives. And the Kake, Alaska, 132 ft. tall, which was made by natives with one single section.

The Natives along the Nortwest Coast of America carved tall red cedar poles with figures, they were known as Totem Poles.

They were crafted by Haida, Tlingit and Tshimishian people and other groups in Canada and the US.

These poles honored their families, clans and chiefs. 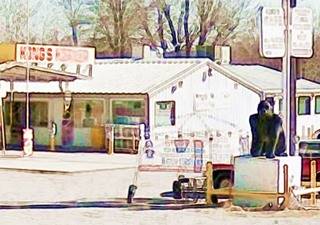 At E-430Rd and Route 66, on the eastern side of the road south of Foyil (14951 S Highway 66), is Kong Korner and Kongs Kafe Gorilla. Don't miss the gorilla statue at the junction (tip: not King sized though).