Sequoyah is a very small town located on Route 66 next to Claremore. It is named after the inventor of the Cherokee script.

Secuoyah is a tiny town located on Route 66 in Rogers County, northeastern Oklahoma, between Chelsea and Claremore.

Route 66 crosses the small community with a notheast to southwest course.

See Claremore, History for full information on the region's history.

A post office was opened at Sequoyah on August 10, 1871. Later a railway stop of the A&P railroad was built at the site.

It is said that the town changed its name to Beulah in 1909 and in 1913 it went back to the original name. Behulah was the name of the daughter of the Postmaster, Mr. Taylor. However a Rogers County map clearly shows that Beulah was loated north of Sequoyah, and 4 miles south of Foyil.

It is a very small rural community which became part of Route 66 when the highway was created in 1926. However, even in the heyday of Route 66, as per Jack DeVere Rittenhouse's book "A Guide Book to Highway 66 of 1946, the town only had "...a dozen homes, one gas station and store".

The town's name honors Sequoya, the inventor of the Cherokee language alphabet

He was born in Tennessee, ca. 1770, the son af a white man, Nahtaniel Gist, and an Indian woman. His father abandoned them when Sequoyah was a child.

He became a silversmith and blacksmith, and was a good artist. He also devised a written alphabet for the Cherokee language which he finished in 1821.

He moved to Arkansas in 1818 and in 1828, he explored the lands in Oklahoma that the Federal government would give the Cherokee in exchange for their territories east of the Mississippi.

He then moved to what is nowadays Sequoyah County, Oklahoma. He died in Mexico in 1843 during an expedition there.

His is the first and only case of somebody who never learned to read or write and created on his own a new written language. 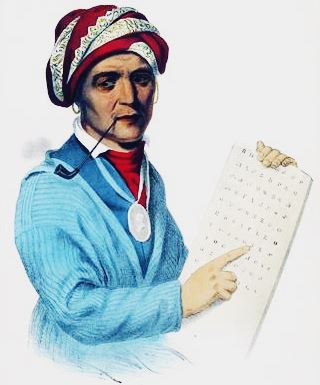 Did you know that the gigantic redwood tree, Sequoia sempervirens is the tallest tree in the world and that the giant sequoia Sequoiadendron giganteum is the largest tree and living creature by volume? Both were named Sequoia in his honor, and so was the Sequoia National Park in California

There are several hotels in neighboring Vinita and Claremore near Sequoyah. Below is a list of lodging in towns along Route 66 close to it:

> > Book your Hotel in Vinita or Claremore

Find a hotel nearby...

Find your room nearby in Vinita:

>> There are three RV campgrounds near Sequoya.

Check the Weather and climate of Claremore for historical weather information.

Tornado Risk: Sequoyah lies within the "Tornado Alley in Oklahoma and experiences some 8 Tornado watches every year.

Read more about: the risk of Tornadoes on Route66.

It is 14 miles southwest of Chelsea and 34 mi. from Vinita.

Map of Route 66 through Sequoyah Oklahoma

See the alignment of US 66 in Sequoyah, on our Oklahoma Route 66 Map, it has the complete alignment across the state with all the towns along it.

Route 66's alignment in Oklahoma: the Historic Route 66 through Sequoyah

Read below for more information on Route 66's alignment in Sequoyah.

Sequoyah is a very small town, just north of Claremore, along Route 66 in Oklahoma. It is a census-designated place (CDP) in Rogers County.

The town is the setting for the 2000 film Where the Heart Is, starring Ashley Judd and Natalie Portman