Carterville a former mining boom town has its share of Route 66 attractions: the Carterville Dairy Creme and the SuperTAM museum with a "Superman" (i.e. Man of Steel) collection. The 1920s US 66 hotel Weeks Hardware Co. building and the Historic Old Rock Sinclair filling station plus the Bulger's Used Car Lot.

Carterville, is a small town located on Route 66 half way between Carthage and Webb City in Jasper County (Webb City and Carterville were known in the early 1900s as the Twin Cities), southwest Missouri very close to Kansas and Oklahoma. (Map of Carterville).

The western part of Missouri was peopled some 10,000 years ago. Around 700 BC, the Osage people reached the area, escaping from the warlike Iroquois, who forced them out of their homeland in the Ohio and Mississippi rivers.

French, coming from Canada explored the region (1682) and named it Louisiana after their King, Louis XIV. After passing to Spain from 1763 to 1800, Napoleon recovered it and sold it to the U.S. government in 1803. It was organized as the Missouri Territroy in 1812 and attained statehood in 1821.

The Osage, who had stood firm against the white settlers and other natives, signed a series of treaties in 1808, 1818 and 1825 reliquishing their land in exchange for new territory in a Reservation in Oklahoma.

In 1841 Jasper county was established and the town of Carthage became county seat the following year. At that time James Carter settled in Jasper in a farm.

During the American Civil War (early 1860s) Carthage was evacuated and razed in two different battles, it was then that Carter's son, James Gilbert Leroy Carter established his farm in Center Creek, 2 mi. north of what is now Carterville. He sold 80 acres of land to W. A. Daugherty, T. Davey, C. Allen and W. McMillan who formed the Carterville Mining and Smelting Co. in 1876.

The company set aside 30 acres for a town and the rest was sold to miners, and the post office that opened that same year was named "Carterville".

Carter suggested the town be called Daughertyville after its W.A. Daugherty, who bought his land to found the town. But Daugherty declined because he believed it would be distorted into "Dirtyville", so he named it after Carter.

Carter is a surname derived from an occupation: he who transports goods by cart or wagon "Carter".

This was at the time when lead and zinc had been found at neighboring Webb City (1873), so Carterville too became a mining community and grew considerably, even bigger than Webb City.

The population was served by a trolley or treetcar linked it with the major cities in the area after 1893.

Lead and zinc mining boomed until the end of World War I in 1918 when richer mines in Oklahoma replaced those in Missouri. The town spiralled into decline.

Route 66 was aligned through Carterville in 1926, at that time it was already paved from the KS border to Carthage. Cars soon displaced the streetcar which was replaced by buses though it eventually closed in 1939.

Route 66 was bypassed by I-44 which opened in 1958 from Oklahoma City to Joplin and then headed east along US-166, south of Carterville, towards Springfield however Route 66 survived in Missouri until its decertification.

Where to Lodge in Carterville Missouri

Lodging close to Carterville in neighboring Joplin or Carthage...

> > Book your hotel in Carthage
or
Joplin

More Lodging near Carterville along Route 66

Motels and Hotels close to Carterville

Find your room in neighboring Joplin

>> Check out the RV campground in Joplin

Carterville is located within the infamous "Tornado Alley" and Japer County has an average of 6 tornado strikes per year.

The climate in Carterville is subtropical and wet; it has cool and dry winters and rainy summers (most rain falls from April to July, with frequent thunderstorms).

Drive to Carterville along US 66 and also via I-44 (to the west is Joplin and Galena in Kansas) and east is Springfield MO. US 71 (overlapping I-49) links it with Fort Smith, Arkansas and Kansas City.

Map of Route 66 through Carterville Missouri

See the alignment of US 66 in Carterville, on our Missouri Route 66 Map, it has the complete alignment across the state with all the towns along it.

Below is the color key for Route 66’s alignment in Carterville:

Route 66's alignment in Missouri: the Historic Route 66 through Carterville

Carterville and its Route 66 attractions

In 1946, Jack DeVere Rittenhouse rode along Route 66 and wrote his "A Guide Book to Highway 66" which gives us plenty of information about Route 66 during its heyday. Rittenhouse mentioned Carterville like this: "garage;stores; no cabins or hotel", at that time the "former opulent mining center [was] almost a ghost town, with its boarded-up stores, empty buildings..."; he added that the collapse began when the lead and zinc mines closed after World War I.

Tour the route 66 landmarks in Carterville

Begin your tour on Pine and Main, at the eastrern tip of town.

To your right, on the corner is the Carterville Dairy Creme, which at originally a gas station, built in the early 1930s. Later it became a Dairy Queen Ice Cream Shop (Street View).

Head west, and just ahead, to your left is the Superman museum:

The museum opened in 2006 and was named "Superman on 66", however its owner, Tamminen had to rename it to avoid copyright infringement. He chose his surname's first three letters -TAM, and the place became SuperTAM.

It is also an ice cream parlor. Taste the "Superman" flavor which is colored red, blue and yellow (obviously).

At the western tip of town, to your right is a classic building:

Weeks was established in the 1890s and at this building was erected ca. 1900. The company supplied hardware to the local mines and it procalaimed itself as "The largest supply house in southwestern Missouri".

It is a three story building, with red brick facade and a corner tower which at one time sported a pyramid hip roof on it.

Now it is boarded, vacant but after the death of Amos Cass, a partner in the company in 1915 mining fell into a depression (1918) and the place became a "drive-in" hotel which allowed guests to use the freight elevator to park their cars on the second floor. This hotel coincided with the creation of Route 66 in 1926.

Later it was owned by cabinet manufacturer Morton Booth Co.

The streetcar no longer runs, the road is now paved, and many buildings have gone. But basically the Weeks Building is the same.

Carterville today, the same spot as the one shown in the postcard above.

Across Route 66, on the SW corner of S. Fountain and Main is a classic Route 66 service station: 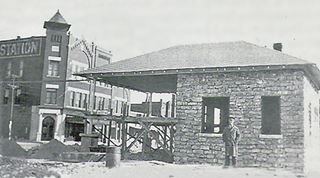 This is a 1920s filling station with a white stone facade. It can be seen in the image

In the black and white photo we see the Sinclair service station being built ca.1937, behind it is the Weeks Hardware Co. building which then had its Pyramid hip roof on the corner tower.

The photo shows that, originally, the service station's roof continued forward, and became the canopy over the pumps, so it followed the Sinclair design (look at the Gay Parita Sinclair gas station on Route 66 in Paris Springs, Missouri which has a similar layout, but was built in wood).

Later (as you can see in this postcard) during the 1950s it sold Hudson brand gasoline and had three pumps in front of the building with no canopy over it. The original canopy area had been closed in before. And you can actually see this if you look at the building carefully, the former canopy is enclosed by walls with stones that have a different tone of white.

Nowadays it is a visitor center (pictured above).

Acrros the street, on the NW corner of Main and Fountain you can see the remains (concrete parking area, basement of office and gas pumps) in what is now a park. This was the Main Street Station and Garage, also known as P & T Auto Sales. 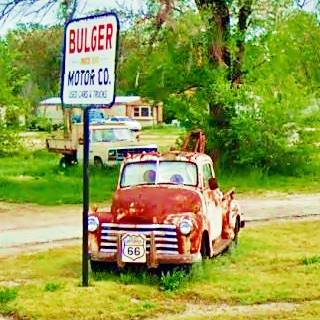 Keep westbound and stop at the Used car lot:

The Bulger's have been selling used cars since the late 1940s, and here are many classic trucks and cars. Do stop for a photo.

It has a definitively "Cars movie" look. Just ahead, Route 66 curves in a wide "S" and heads towards Webb City.

From Carthage to Webb City

This is shown in Pale Blue in the Map above.

From downtown Carthage on N. Garrison Stret and Oak St., take a right along Oak Street and continue until reaching the Municipal Park, where the road forks. Take the southwestern branch which was the 1940s alignement of Route 66.

The road will take you past the famous Carthage Drive In. Ahead, at Brooklyn Heights I-49 cuts the old road's path (which continues on the western side of the freeway as Index Rd.) so you will have to head south to cross I-49 at Exit 46 and then head north again to reach Old Route 66, which used the same alignment from this point westwards from 1926 until its decertification.

The road is clearly marked with the Blue and white "US 66 Byway" signs.

Route 66 enters Carterville along Pine St. and takes a right at Main Street in downtown Carterville.

> > See the next segment Carterville to Webb City (west)