Plew is a very tiny community, not even a village, located on U.S. 66 between Avilla (to the west) and Rescue (to the east) in Lawrence county, Missouri and next to it are the remains of Log City Camp and what used to be Forest Park Camp (now gone), to the east near Rescue is Shady Side Camp.

Plew is a small community located on Old Route 66 in Lawrence County, in southwestern Missouri. (Map of Plew).

Old building next to Route 66 in Plew Missouri

Learn more about the history of Plew in our Carthage Missouri page.

Plew is apparently named after its first settler ca. 1830s. Plew is a northern Enlgand deformation of Plow which in turn is a nickname and sign-name derived from old Norse plóg-r (plough).

The unincorporated community in a rural farming area and had a post office from 1893 to 1904. Nowadays it is a scattering of houses.

Route 66 was aligned through the area in 1926 and travel along the U.S. 66 gave some boost to the local economies during the Depression in the 1930s. But this disappeared after the town and Route 66 were bypassed by I-44, which had opened in 1958 between Joplin and Oklahoma City, and then went east along what used to be US-166, south of Plew towards Springfield.

Where to Lodge in Plew, Missouri

More Lodging near Plew along Route 66

Motels and Hotels close to Plew

Plew is located within the "Tornado Alley"; Lawrence County has around 8 tornado strikes per year .

Weather widget for Avilla, the town nearest Plew, to the west

Map of Route 66 through Plew Missouri

Route 66's alignment in Missouri: the Historic Route 66 through Plew

Plew and its Route 66 attractions

Plew is a tiny community with scattered houses and some remnants of Route 66 like Log City Camp, Forest Park Camp - now Gone to the west of town.

In his 1946 book "A Guide Book to Highway 66" Jack DeVere Rittenhouse gives us a clear picture of Route 66 was like during that time, yet he does not mention Plew, only the two camps which were resorts with cabins built of logs and stone. There were service stations and cafes. He added that there was a gas stations 6 miles west of Avilla, which places it in Plew.

Tour the route 66 landmarks in Plew

In the "central" part of Plew, on the southwest corner of County Rd. 1010 and MO-96 (old Route 66) is a long wood frame building that very probably was a grocery or service station during U.S. 66's heyday, it is shown at the top of this page.

Established in 1926, by Carl Stansbury, 1938 it had a service station a café diner, (liquor store) and fourteen cabins with bathtubs. It was located east of the town (3.5 mi.) After I-44 bypassed Route 66 in the late 1960s, they had less visitors and eventually closed.

More recently the former service station was reformed and converted into an auto body shop.

This competitor of Log City, opened in 1928, right across the highway from Log City Camp. It had rock cabins, café and restaurant. It too declined and now no trace remains. 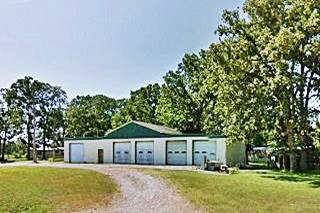 From Halltown to Plew

Route 66 was created in 1926 and aligned along the Ozark Trail from St. Louis MO to Romeroville NM, passing through Plew.

Route 66 follows a straight course from Halltown to Avilla, and it has followed it since Route 66 was created back in 1926, which is shown in Pale Blue in the Map above. There is a small segment of th original 1926 road in Paris Springs, shown in Black in the map above.

> > See the next segment Plwe to Avilla (west)