Clinton, is best known for the Route 66 Museum and its vintage Y Service Station (1937). Other landmarks are Rio Siesta Motel, the Glancy Motel, and Old Service Station, the Former Home on the Range Motel, its McLain Rogers Park (with neon sign included) and the Historic Armory, both listed in the National Register of Historic Places.

Clinton is located in south central area of Custer County in western Oklahoma. It also spreads into Washita Co., to the south. Its motto is "Hub City of Western Oklahoma".

Although Oklahoma has been occupied for more than 10,000 years, the Indian tribes that lived here just before the land was settled by European Americans was the outcome of the U.S. government's policy regarding Native Americans.

Starting in the 1820s, the government gave Indians new lands in exchange for their former territories in the East. The policy was to remove them west, so it created the Indian Territory west of Kansas and established reservations there.

But the demand for land led to a change in policy. The Dawes Act of 1887 laid down that the natives had to be assimilated. So in 1891 the reservations were dissolved: and the individual tribe members were given a 160-acre plot each. The surplus tribal land was then purchased by the U.S. government for future settlement.

The Cheyenne had originally lived near the Great Lakes in Minnesota and moved towards the Great Plains in the 1700s. The Arapaho lived in Montana, Wyoming, South Dakota and Canada. Both nations met in the plains and formed an alliance whose territory ranged from Texas to Montana. Despite signing a treaty with the U.S. government (1868) which guaranteed the integrity of their traditional lands, European settlers intruded on their territory. This caused conflict. A second treaty was signed (1867) promising the Arapaho a Reservation in Kansas, but they opted to move with the Cheyenne to a reservation in Oklahoma.

3.5 million acres of land were opened for settlement by the U.S. government on April 19, 1892. The settlers rushed to the Oklahoma Territory for their homestead in the former Arapaho-Cheyenne Reservation.

The town is located on the Washita River, It began as a railway junction named "Washita Junction", four miles south of the County seat, Arapaho, where the north to south "Frisco" railroad crossed the east to west running Rock Island Railway.

Elvis Presley once stayed at the Trade Winds Courtyard Inn.

The townsite was platted in 1899. Sale began in June 1903 by Washita Townsite Co. on land owned by Native Cheyenne. They were authorized by the U.S. Congress to sell part of their land to the townsite company.

Although the area had been opened in the 1892 Cheyenne-Arapaho Land Run, the land had remained in the hands of the natives after it was sold to the individual tribe members prior to the Run.

Arapaho residents feared competition from a strategically located town so they took the issue to court and lost. The Judge Clinton Irwin ruled in favor of the townsite company.

Clinton was the name of the judge (Clinton Irving) that defeated the lawsuit filed by the town of Arapaho against the new town wich would become Clinton. That is how Washita Junction became Clinton.

A post office opened in 1903 and the town grew based on farming (cotton and corn). It still is a farming and ranching town. Route 66 passed through it when it was created in 1926, and only in 1971 was it bypassed by I-40.

Clinton is known for its high school football team, the "Red Tornadoes", who have won 16 state championships.

Book your hotel in Clinton

> > Book your Hotels in Clinton.

Lodging Near Clinton along Route 66

Book your hotel in Clinton

>> There are RV campgrounds in Clinton.

There are some 52 Rainy days every year and the relative humidity is around 61%.

Clinton is located in Oklahoma's "Tornado Alley and experiences about 12 Tornado watches every year.

Map of Route 66 in Clinton, OK

Check out Clinton on our Route 66 Map of Oklahoma, with the complete alignment and all the towns along it.

The map above shows US 66 alignment through Clinton, the color key For Clinton only is the following:

Map with the alignment of Route 66 through Clinton

Route 66's alignment in Oklahoma: the Historic Route 66 through Clinton

Read below for more information on Route 66's alignment in Clinton.

Route 66 passed through Clinton and it still has several Vintage gas stations. Its Route 66 Museum is the most complete museum along Route 66 full of iconic stuff so you can relive Route 66's heyday.

Start your tour on the eastern side of town:

The 1955 Rio Siesta Motel in Clinton, Oklahoma, with its cozy gabled roof units is still standing at the eastern tip of Clinton:

Still the same, but lacking its lovely neon sign, which is being safely stored with many other dozens of neon signs and billboards in a warehouse for the future Billboard Museum.

Head west to the Glancy Motel:

Back in the 1940s owned by Mr. and Mrs. Chester Glancy, their postcard read "We want you to spend a night in these beautiful modern air conditioned courts... on 66 short cut" (short cut was the US 66 alignment that circled round the town instead of going through it).

The motel was revamped with a 1960s space age look later as you can see in the postcard below and its current appearance has not changed since then:

A vintage postcard of them motel: 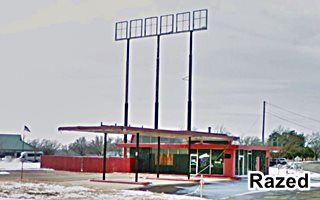 Located on the south side of town, where two main highways met, US 66 on Opal Ave. and US 183 along South 4th Ave.

Head west along Opal Ave, pass by an abandoned motel (behind Wongs Chinese restaurant), this is its Street View.

Then, as Opal Ave. curves to meet S 10th St., look ahead at the Historic Park:

The park sits on Route 66 at the intersection of S. 10th St. and Bess Rogers Dr.

The Federal goverment's Works Progress Administration (WPA) employed the jobless workers of Clinton in several emergency projects. One of them was the McLain Rogers Park, named after Clinton's mayor, built between 1934 and 1937.

It was a 12 acre park with an Art Deco acces gate on Bess Rogers Drive. It had tennis courts, baseball field, picnic facilities and a bathouse. A highway patrol building was added in 1941 to police the traffic along Route 66.

Another WPA project built between 1935 and 1937. This single story brick building with concrete details was constructed in typical WPA Deco style.

It was one of several armories built in Oklahoma during the Great Depression, and is similar to the Weatherford Armory in style (The Chandler Armory lacked brick and was entirely built in stone).

Continue westbound along 10th St. and to your right, just ahead is a classic US 66 Motel:

Former Home on the Range

This is the motel in a vintage postcard:

Continue with a wester course, passing under I-40 at Exit 65 A. Here is the 1926 US 66 alignment, as Neptune Dr. just ahead the road splits, with US 66 taking the right side fork. Here is the Historic Y Service Station, at the fork:

Vintage 1930's Route 66 Service Station and Cafe at a key location in Clinton. I was built in 1937 on a strategically located corner south of town; a "Y" shaped intersection that gave it its name.

At the junction Route 66 met with U.S. Highway 183. The station had pumps serving both routes.

Later it included the "Y Modern Cabins", now demolished. The Federal WPA projects during the Great Depression upgraded the neighborhood with Neptune Park.

It was built in Southwestern Mission Revival style with stucco finish and simulated red roof tiles. It also incorporated some Art Moderne streamlining.

As traffic grew, so did congestion and Route 66 was realigned in 1956 bypassing Y Service Station. It has evovled and now is an automobile dealership.

Retrace your steps to I-40 and 2.5 mi. from the Y service station is the Route 66 Museum (Map with Directions).

It is the first official state-operated Route 66 museum in the country. A complete exhibiton on Route 66, a trip through time with iconic images, vintage artifacts and bygone days.

Visit, to the east, the nearby towns of Weatherford, Hydro, Bridgport (almost a ghost town), Geary and Calumet. To the west is Foss and Canute.

The Old alignment of Route 66 near Clinton

Book your Hotel in Clinton

See this Street view of the old US 66's dead end (south side Frontage Rd.) just east of Clinton.

Route 66 took many different courses through the town:

West of Clinton the road became a 4-lane highway between 1956 and 1958. But the older alignment took a different course:

The road continued along Neptune south of modern I-40 and then headed west after a curve along W. Commerce Rd. This segment was paved in concrete in 1931. It met modern I-40's alignment at Exit 62, and headed west as current South Frontage road of I-40 until Exit 57 next to Foss.

Read more about US 66 in Weatherford, east of Clinton.