Niangua is a small town in northern Webster County, in southwestern Missouri. (Map of Niangua).

Route 66 does not go through the town, instead, it passes 1.2 miles to the west of it through Niangua Junction, this is because the town was platted next to the railroad, while the highway took a shorter route. This is a Map showing Niangua junction, at Main Street and Route 66 (Mo Hwy CC).

Read about the region's history in our Marshfield page.

Niangua (formerly named Miteomah) takes its name from stream which runs close to it which was named after the Osage word for "bear".

The area was surveyed in 1870 by the South Pacific Railroad Co. and shortly after John J. Redmond built the first general store. Shortly after, the Atlantic & Pacific Railroad reached the area and built a station there, 6 miles north of Marshfield. The post office opened that same year and was named Niangua.

Where to Lodge in Niangua, Missouri

> > Book your hotel nearby in Marshfield

More Lodging near Niangua along Route 66

Motels and Hotels close to Niangua

>> Check out the RV campgrounds in Marshfield close to Niangua

Niangua is located in the "Tornado Alley" and Webster County has around 9 tornado strikes per year.

Map of Route 66 through Niangua, Missouri

Route 66's alignment in Missouri: the Historic Route 66 through Niangua

Niangua and its Route 66 attractions

Niangua is a town located near the 1926 to 1953 Route 66 alignment. It has a classic motel, the Abbylee Court with an original sign, and two former cafes with cabins and filling stations: Oak Vale Park and Rockhaven, plus the cottage style 1930s Niangua Filling Station.

Jack DeVere Rittenhouse published his "A Guide Book to Highway 66" in 1946, and it left us a clear description of the Mother Road during during its heyday. He does not mention Niangua, because he must have driven past it. He did mention some landmarks: "Abbylee Court and Cafe... Oak Vale Court, with gas and cafe", which are still standing.

Tour the route 66 landmarks in Niangua

From Niangua Junction site of the former 1935 Service station and grocery which was remodeled in the early 1990s, head north to visit Abbeylee Court: 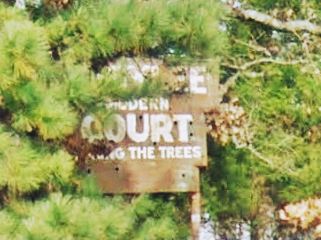 To your right, 0.6 mi. north of Niangua Jct. are the remains (and sign) of the old Abbylee Motel, also known as Abbylee Court.

The motel or auto court, as they were known at that time, was built in 1940. It had eight cabins each with three rooms, with gabled roofs. The office was located in the center, with the cabins facing a circular gravel drive. There was a cafe which burned down after 1950 (one cabin was lost in the same fire).

This was a "strictly modern" business with "good food". Ritten house mentions the "Abylee Court and Cafe".

About 0.3 mi. sout of Niangua Jct., to your left, on the eastern side of the road you will see what once was a cafe, service station and campground.

Built in 1932, it was also known also as Carpenter's Camp the one floor building with a steep pitched gable roof is a typical example of a Craftsman style cabin with local rock foundation wall.

Fred and Margaret Carpenter bought the place in 1936 and opened a Skelley gas station with a café. In 1939 they sold it to Florence Onstott, who renamed it Oak Vale Park and switched to Sinclair gasoline adding cabins. It later changed hads several times until it became a private residence.

Rittenhouse mentioned it as the "Oak Vale Court with gas and cafe".

Continue south to visit yet another Route 66 relic:

About 1.4 mi. south of Niangua Jct., to your right, on the eastern side of the road next to a wide bend.

This is private property built around 1925. The one floor wood structure has broad gabled roofs and rubble rock walls. Owned by the Ferriers during the 1920s they leased it as a Conoco Service Station in 1932. In 1938 it was a Texaco. It changed owners many times and opereated not only as a filling station but also as a tavern, restaurant and cafe, with some cabins too. It was open until the mid 1960s. Pictured at the top of this page.

Keep on towards Marshfield and visit a 1930s Service Station: 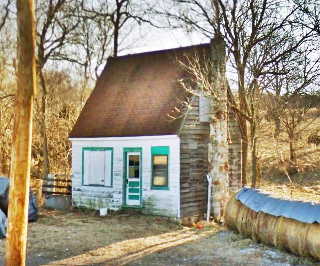 To your right, on the eastern side of the 1924 pony truss style Niangua River bridge you will see a cottage with a steep pitched gable roof, a stone chimney and wood siding. There is a window in the attic too.

Built ca. 1930 when gas stations were designed to blend in with the local neighborhoods, and therefore had a "cottage" look or a rural Picturesque style. Although abandoned it is still standing.

Book your
Hotels in neighboring Marshfield:

The original alignment is shown in the Map above in Pale Blue, and was a winding course between Strafford and Lebanon and it passed 1.2 miles from Niangua, linking to it via its Main St. from Niangua Junction.

In 1952 the Missouri Highway Department began improving Route 66 to make it safer, and it built a straighter alignment to the west of the original one and further from the old town. It was upgraded it gradually to a four lane highway that coexisted with I-44 until it was finally decertified around 1979.

The map above shows Route 66 between Lebanon and Springfield in 1957. I-44 had not yet been built and US 66 was a divided highway that almost reached Strafford. The older alignment of Route 66 had been redsignated as MO-CC between Conway and Marshfield, passing by Niangua which is shown on the map.