Texola is the westernmost town in Oklahoma along Route 66. Its tiny stone Jail and the Magnolia Service Station (a Historic Place) are its best known landmarks. Now it is almost a ghost town.

Texola is a town in Beckham county barely one mile east of the Texas state line. Its nickname is "Beerola" and its unofficial motto is "There is No Place Like Texola".

Its location is very close to the 100th meridian, which marks the border between Texas and Oklahoma led to it being surveyed on eight different occasions, as the line moved back and forth. Finally the initial residents found themselves in Oklahoma.

The townsite had two previous names before deciding on "Texola": Texoma and Texokla, all of them referring to its location barely 1 mile east of the Texas - Oklahoma state line.

As with most towns along Route 66 in this part of Oklahoma, the townsite was the outcome of the railway expansion westwards, into Texas. The Choctaw, Oklahoma and Gulf Railroad (later Chicago, Rock Island and Pacific Railway) planned a new rail line west from Weatherford to Texola. It began construction in 1901 and it also set up a company (The Choctaw Town Site and Improvement Company) to plan and lay out towns along the tracks and sell lots to "Sooners" who were seeking a better life in the West.

A post office was established in 1901 and Its first postmaster was Reuben H. Grimes. At that time Texola was part of a very large Greer County and Sayre was part of Roger Mills Co. After Oklahoma's statehood in 1907, Greer and Roger Mills counties were reorganized and Beckham County was created.

Shortly after (1902), the Choctaw, Oklahoma and Gulf Railroad line laid its tracks through Texola.

The rural area surrounding the station produced cotton which was processed at the local cotton gins. The town had a newspaper between 1902 and 1921. And population grew steadily.

Route 66 was aligned through the town in 1926 (5th Street), in those days it followed Oklahoma State Highway No. 3. The road was later paved and drew a growing flow of travelers. The Great Depression in the 1930s plus the Dust Bowl led to an exodus of dispossessed farmers from region (see Grapes of Wrath), this however helped the local economy unitl the early 1970s, when Interstate I-40 bypassed the town.

Book your hotel near Texola

> > Book your Hotels in nearby Elk City, Sayre or Shamrock, Texas.

Lodging Near Texola along Route 66

Book your hotel close by, at Elk City

>> There is a RV campground in Texola.

This part of Oklahoma is a relatively dry region. The yearly rainfall is around 24 in (618 mm). Summers are hot but with lower temperature during the night which make them bearable.

Snow: Snow falls in this region at any time between September and May (the first snowfall takes place usually, on the first week of December). Its altitude causes greater snowfall than locations further east: averaging 17” per year (with maximum values of about 40”) - 43 to 102 cm.

Texola is located in Oklahoma's "Tornado Alley and experiences about 11 Tornado watches every year.

Check out Texola on our Map of Route 66 Map in Oklahoma, with the complete alignment and all the towns along it.

Map with the alignment of Route 66 through Texola

Route 66's alignment in Oklahoma: the Historic Route 66 through Texola

Read below for more information on Route 66's alignment in Texola.

We have a great description of Route 66 in Jack DeVere Rittenhouse's "A Guide Book to Highway 66" published in 1946. In it he wrote that Texola had "gas; cafes; no courts; limited facilities", its population was 337 and he described it as a "sun-baked small town" with "stores which truly savor of pioneer days".

In Texola, on 5th Street (Route 66) is the Magnolia Service Station, a Historic place. Don't miss its tiny Jail and take your time savor its "ghost town" flavor.

The remains of a vintage 1930's Route 66 Service Station in Texola.

It was built around 1930 with a very simple design: "box and canopy" in which the office was a cube facing the filling bay which in turn was covered by a streamlined canopy that continued as one unit with the office.

It sold Magnolia brand fuel. It is also a departure from the "cottage" style seen in other gasoline filling stations, it reflects a more austere and modern design with Art Moderne lines in tone with the Great Depression.

It remained operational until the 1960s. Today it is an abandoned building. 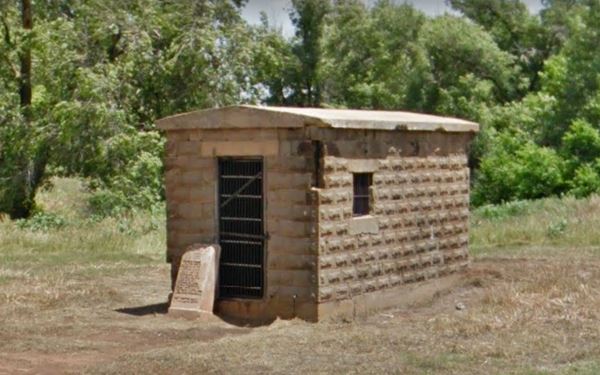 This monolithic stone building was erected in 1910 with iron bars for door and windows to incarcerate the local ruffians.

Visit, to the east, the nearby towns of Erick, Hext, Sayre. To the west is Texas with Shamrock, Lela and McLean

The Old alignment of Route 66 near Texola

Book your Hotel near Texola