Lela is a very small town located on the Historic Route 66 alignment on the north side of I-40 in Wheeler County, Texas.
It has a Historical School Building and several derelict service stations.

Lela is located in Wheeler County, in the eastern region of the Texas Panhandle, 5 miles (8 km) west of Shamrock (the most important town in the area).

The Texan Panhandle has been inhabited for the last 10,000 years. The Spanish explored the region and made it part of their American colonies and to Mexican control after its independence in 1810 - 1821.

At that time the Comanche and Kiowa Indians peopled the plains and hunted buffalo there. The U.S. annexed Texas in 1845 and subdued the natives (1874 - 1875) allowing pioneers to settle there.

In 1902, the Chicago, Rock Island and Gulf Railway built a line westwards towards New Mexico and built a station in the place that was to become Lela.

Lela
Although the railway station and the community that sprung up next to it were named "Story", in 1903 the local postmaster named his post office after his sister-in-law, Lela Smith. The town adopted the new name and dropped Story.

The name derives from Leila which in Arabic means: night, dark beauty, and from Persian (dark-haired); it was most popular in the 1890s when 0.81% of the babies carried that name.

Lela grew slowly and most of its business gradually moved over to neighboring Shamrock. Its population was small yet it had a church and an elementary school. It had a period of growth with the oil boom in the mid 1920s, and later when Route 66 passed through the town. But Shamrock was to close and absorbed most of the travelers and growth. I-40 bypassed it and its post office closed in 1976

Today the town is almost a ghost town without any open business, but the Historic school building still stands, in good shape, and so does its church. However there are many homes no longer cared for or used by anyone.

Where to Stay near Lela

The closest town with a pick of places to stay is neighboring Shamrock, 5.3 miles (8.5 km) east of Lela.

>> Book your Hotels in Shamrock

Lodging Near Lela along Route 66

Book you room in neighboring Shamrock:

What is the Weather in Lela?

The Texas Panhandle region is dry and its average rainfall is only 24 in. (or 618 mm) yearly. During the summer the temperature averages maximum temperatures above 90°F (30°C) with minimum averages around 65°F (19°C). Winters have maximum averages of 50°F (10°C) and minimum averages that are below freezing point: 25°F (-4°C).

Snow is common during the period spanning September to May and you can expect snow to fall early in December, with around 16 inches yearly, although up to 40 inches have been recorded. That is: 43 to 102 cm.

There is an extremely low risk of encountering Tornadoes as Lela is within the "Tornado Alley". Learn more about Tornadoes on Route 66.

Lela is the second "town" along I-40 and U.S. Route 66 after entering Texas from Oklahoma, after Shamrock.

Check out Lela on our Texas Route 66 Map, with the complete alignment and all the towns along it.

Route 66's alignment in Texas: the Historic Route 66 through Lela

Below you will find full details on Old Route 66 in Lela.

Small town along the road path of Historic Route 66. Visit its Historical School Building and the abandoned shells of defunct service stations.

The small village is an attraction in itself. It is three blocks long and two deep. Highway 66 runs on the south side of the town, as I-40's North Service Road. And Farm to Market 3075 marks its eastern border.

Take a right turn at 2nd St. and after one block you will reach the Historic School Building on the north side of Maple St.

The school opened shortly after the station was established. In the mid 1920s the Long Dry Creek unexpectedly flooded the town and school, leading to its relocation half a mile uphill towards the north. The school burned down in 1927 and a brick building replaced it.

Students of the upper grades soon moved to Shamrock and as population diminished so did the students. the Lela School district closed in 1992 and was annexed to Shamrock's district.

Former location Exit on I-40 Exit, now in McLean. 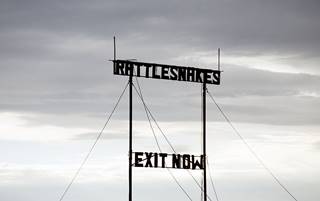 This is actually a «non-landmark» because it is no longer there: the sign has been relocated to neighboring Mc Lean, 14 mi further west.

There was a sign in the past, by the Exit into Lela, on the north side of I-40; it advertised the «Regal Reptile Ranch» with an enticing text: «Rattlesnakes - Exit Now».

Road shows with rattlesnakes were an attraction during the 1950s and 60s. This one belonged to E. Mike Allred, who also operated other snake pits along Route 66 in Elk City and Erick in Oklahoma as well as Alanreed in Texas.

Allred's roadside snake pit was housed in a service station next to the exit. The very tall sign was blown over by strong winds in March 2007.

The service station and building are gone but you can still spot some remains among the tall grass.

Restoration and relocation to McLean

The sign was rescued and relocated to neighboring McLean by Ruth and Delbert Trew, it still decries «Rattlesnakes» in dark green letters but on shorter "wind-proof" posts.

It is on a grassy stretch on the north side of 1st St. between Mc Carty and Donley Streets, McLean, TX.

And, some of the snakes can be seen, floating in jars with formalin, at the Devil's Rope Museum in McLean.

In the neighboring town of McLean, 14 miles (22 km) west of Lela. Read more about: McLean's Attractions

See next section of US Route 66:

From: Shamrock to Lela, TX

Leave the center of Shamrock, (mile zero) and head west along Bus I-40 (West 12th Street); it then becomes State Spur 556. Don't take the fork (1 mi) that, to the right, enters I-40's north Frontage Rd. Stay on the south service Rd. and head west.

Below we detail the rest of the itinerary, to McLean, the following town along Route 66.

From: Lela to McLean

Keep westbound along Route 66 and you will reach the I-40 Exits east of McLean (19 mi); pass under I-40 heading to the north side frontage Rd., take a left along what is now McLean's 1st St. and drive into the town of Mc. Lean.

The road (1st Street) will take you through the Historic District, past Devil's Rope Museum. Don't miss the iconic Phillips Service Station (21 mi).

The exit and entry ramps of I-40 do not intersect its service roads; they merge with them. You should yield to those who exit the I-40 as they have the right of way. Avoid accidents, drive with care.