Chambers is a scattering of houses, a service station and a motel which has been there since the late 1970s.

Chambers is a unincorporated community in Apache county in the Navajoland of eastern Arizona, on Route 66. See a Map of Chambers.

The passage of time on Route 66

An old abandoned Garage and filling station west of Chambers, on Route 66

Arizona has been inhabited for more than 10,000 years, and along the Colorado Plateau lived the Anasazi people. Their southern border was the Puerco of the West and the Little Colorado rivers. They were farmers who reached their peak between 700 and 1150 AD. Then they moved to the southwest into New Mexico where they originated the Pueblo People.

The current native people, the Navajo reached the area ca. 1400 AD. They were like the Apaches, of Athabaskan origin, with their roots in Canada, and migrated south into SW USA.

The Navajo (who called themselves Diné - or "People") were hunter gatherers who later learned farming from the Pueblo people.

In 1539, Francisco Vazques de Coronado reached the area and occupied Zuni Pueblo before moving east through the Rio Grande and into the Great Plains. He sent a group of men under the command of García López de Cárdenas to check out the rumors about a great river, the "Tison" to the west of Zuni Pueblo.

Almost 60 years later, the Spanish returned and occupied New Mexico (1597), which encompassed Arizona, yet they never settled in Arizona; the Navajo were too bellicose.

The Navajo learned to raise goats and sheep (rustled from the villages they raided), and received their name from the Spanish who called them "Apachu de Nabajo" (Apache of Nabajo).

The Navajo raids continued until the US incorporated Arizona (as a part of New Mexico) after defeating Mexico in the 1846-48 war.

A first fort established in Arizona in 1851 by Col. Edwin V. Sumner (Fort Defiance) began the campaign to subdue the Navajo. It concluded in 1864 with the "Long Walk" and internment of the Natives near Ft. Sumner New Mexico. The tough campaign and the harsh internment conditions led to a treaty in 1868 which allowed the Navajo to return to their homeland.

The Navajo Reservation was created and peace finally reigned in the territory.

Apache County has the most land designated as Indian reservation of any county in the United States (68.34% of its area). Neighboring Navajo County is in third place.

Apache County was established in 1879. In 1895 Navajo county was split-off from it western section.

A stage mail route, "Star Stage Mail" ran along the south bank of the Puerco River between Fort Wingate, NM and Fort Whipple (nowadays Prescott) AZ. It had a stop near Chambers, at Navajo Springs. There it met the old military road from Albuquerque to Holbrook. This route had been established by the Beale expedition in 1857.

The Lt. Edward Fitzgerald "Ned" Beale (1822 - 1893) was commissioned to survey and build a wagon road from Ft. Smith to California, and he followed a route that roughly lined up with what is now Route 66.

He passed just south of where Chambers is now located, in 1857. Beale employed camels, imported from Africa as pack animals. Though hardier than mules, the camels scared both horses and mules. The Army decided not to use camels in the future.

The Atlantic and Pacific Railroad (Later absorbed by the Atchison Topeka & Santa Fe Rail Road), built a stop and called it Chambers in 1883; steam engines needed water, and Chambers had a good well.

It was named after Edward Chambers who was Vice President of the Atchison Topeka and Santa Fe Railroad.

It is an "occupational suname" for those who were employed in the private living quarters of their masters, his 'chamber' or room.

However and, this is a coincidence (just like in the case of neighboring Sanders), a person named Charles Chamber had operated a trading post there at that time.

The post office opened in 1908, and briefly chaged its name to Halloysite in 1926 but returned to its original name in 1930. Hallosyte is an aluminosilicate clay mineral found in association with other mineral clays. It was named after the Belgian Geologist Omalius d'Halloy. The clay mine was exploited by the Filtrol Company of California in 1929 and used as a filtering medium in the chemical industry.

Route 66 was aligned through the town in 1926, and some trading posts were established to cater to the travellers.

Surprisingly it does not appears in the Rand McNally road map of 1927. The Arizona State Highway Road Map of 1935 does show it, (7.8 mi. from Navajo and 6 mi. from Sanders); it also shows that Route 66 had been paved by then. Route 66 was later replaced by I-40 in the 1960s but overlapped the old Route 66's alignment.

There is lodging on Route 66 in Chambers itself

> > Book your Hotels in Chambers

Lodging Near Chambers along Route 66

On the Santa Fe Route 66 segment in New Mexico

Find your hotel room nearby in Holbrook

>> There are RV campgrounds near Chambers, in Holbrook AZ.

Chambers's climate is semi-arid and dry. Summer is hot and winter is cold. The day-to-night temperature swing is considerable throughout the year due to the low relative humidity; this means that Summer nights are pleasant and cool, but winter nights are quite cold.

The arid area does not receive much rainfall, only 9.5 inches per year (240 mm). Half of it falls during the Summer Monsoon period from July to October (5 in. - 127 mm). There are some 49 days with precipitation every year.

Snowfall is light with about 6.5 in. per year (16.5 cm), which falls between October and April.

There is almost zero tornado risk in Chambers: Apache County has no Tornado watches. The area west of this point has no tornado events at all.

Map of Route 66 through Chambers Arizona

Check out Chambers on our Arizona Route 66 Map, with the complete alignment and all the towns along it.

Route 66's alignment in Arizona: the Historic Route 66 through Chambers

Chambers, Arizona, its Sights and Attractions

Things to Do and Places to See

Chambers a small town in Arizona, on Route 66.

During US 66's heyday, Jack DeVere Rittenhouse in his "A Guide Book to Highway 66" published in 1946 describes Chambers as having a population of 59, two gas stations, one small tourist court "Riggs Cafe and a few buildings". Nearby, along Route 66, two miles to the west of Chambers was the Indian Village Trading Post followed two miles further west by the Rio Puerco Service Station. Then, 8 miles west of Chambers was Navajo, the next main "town".

Just 2 miles east of Chambers was Navapache, which had lodging: "one tourist court", a store, grage and gas station. The store was the now gone Navapache Trading Post.

The White Elephant was a lodge, bar and curio shop which had been built by Mitchell Dickens and Bob Cassady Jr. They had run it as the Chamese Lodge.

According to rumors, there were illegal slot machines in the place. It went broke and was bought by Al Berry. Later it passed into the hands of the Eddens, and finally, it burned down.

Then and Now, spot the differences...Motel in Chambers

You can Book a Room in the Days Inn

The pool is still there, but the bricks have been painted pale blue instead of white. The slanting roof on the main building (right) is now interrupted by a second floor with a gabled roof matching the rest of the rooms. The sign has moved further west, in front of the main building.

A 1980s postcard of the Chieftain Motel, Best Western, in Chambers, AZ. Route 66

The street view of the Motel that is there nowadays

Head west and visit Navajos, Holbrook and Winslow; you can also go east to Sanders, Houck, Lupton or further east to New Mexico to visit Gallup.

The Alignment of Old Route 66 near Chambers

Chambers is located on the segment from Sanders to Holbrook, described below:

From Sanders west to Holbrook

Leave Sanders and head north along US 191 until reaching Exit 399 of I-40, cross to the north side and head west along US 191 Frontage Rd. (also I-40s Frontage Road). This is a 6.5 mile-long stretch that ends at US 191 just north of Chambers. See this Map from Sanders to Chambers.

The road ends there (in the past it continued west) meaning there is a gap in the old roadbed. So you must drive south towards Chambers along US 191 and at I-40's Exit 333 head west again along I-40 until Exit 330.

At this point there is a nother gap, you will have to follow Park Rd. south to I-40, and at Exit 311 head west along I-40. You will see the original US 66 on the south side of I-40, and you can reach it if you want to drive along it, at Exit 303. This Map of US 66 from Petrified Forest to Little Lithodendron Wash, it is a 8.1 mile-long segment.

This wooden bridge is 243 ft. long and 23 ft. wide, it spans the Little Lithodendron Wash, also known as Carrizo or Little Carrizo Wash -Carrizo is Spanish for "rush". 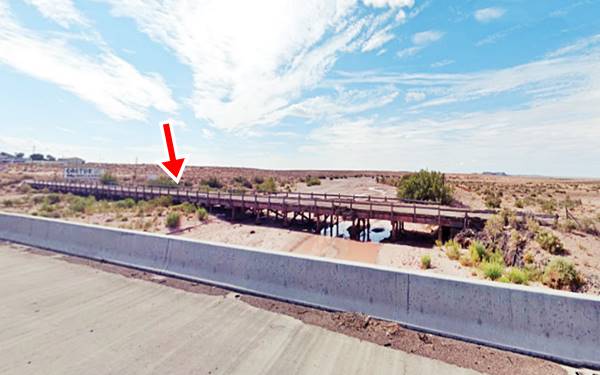 Read more about the historic bridge at our Holbrook page.

After the historic bridge, at Exit 300 you must get on I-40 westbound all the way to Exit 294, at Sun Valley, where you can drive the original alignment along Pima St., this ends right next to Exit 292 in a dead end. You can backtrack a couple of miles and reach I-40 at Exit 294 (See this map) or, take a dirt road that runs south right beside the dead end,and reach the North Frontage Rd. at Exit 292. See the Map from Little Lithodendron Wash to Hopi Travel Plaza.

West of Exit 292, the roadbed of I-40 overlaps the original alignment until Exit 289, here you can leave I-40 and drive into Holbrook along Navajo Blvd. (3.1 miles). This is the Map of Route 66 into Holbrook

> > See the next segment Holbrook to Winslow

Read about the parks nearby, at Holbrook: Petrified Forest National Park.