Dwight is a village on Route 66 in Illinois. Its most famous attraction is the Historic Ambler’s Texaco Gas Station.
There are more historic places in Dwight: the Historic Frank L. Smith Bank designed by Frank Lloyd Wright, the Historic Pioneer Gothic Church, the Historic Railway Depot and the Historic Windmill in Dwight. And also these two Route 66 sites: Former Coffeehouse and Big Al’s Hot Dogs (Gone).

The Alignment of Route 66 in Dwight

Dwight is a village that is mainly in Livingston County and that also has a small portion in Grundy County. This is a Map of Dwight.

See the History of Pontiac for a description of the early history of Livingston county, and Gardner's History for that of Grundy County.

Although some settlers arrived at the time that Livingston county was created in the 1830s, settlement would have to wait for the railroad in the 1850s.

The Alton & Sangamon Railroad that later became the Chicago & Alton Railroad passed through this area in 1854 and the station named "West New York" was built, but shortly after it was renamed Dwight by Richard P. Morgan Ir., then an engineer and later general superintendent of the Chicago & Mississippi Railroad.

A community sprang up beside the railroad depot. In 1879 Dr. Leslie Keeley opened his institution to trat alcoholism. After his death his partner John Oughton continued with the operation, and his house is still standing in Dwight, a Historic site.

It was named for Henry A. Dwight Jr. who was the main financier of the railroads (C&M and the Alton and Sangamon) chartered in 1847 and 1852 respectively but stunted due to lack of funds.

Dwight floated bonds, raised the money and built the tracks from Springfield to Joliet. He ended up going bankrupt and left the company.

Dwight: Hotels and Motels nearby

> > Book your hotel in Dwight

Find your hotel in Dwight

>> See the RV campground nearby in Pontiac

The climate of Dwight is classified as humid continental and has clearly marked seasons with hot and often humid summers, cool and wet springs, mild autumns and cold winters.

The region where Dwight is located gets hit by 6 tornados per year.

How to get to Dwight?

You can get to Dwight by driving along Historic Route 66, from I-55 use Exit 209 into Dwight.

Check out Dwight on our Route 66 Map of Illinois, with the complete alignment and all the towns along it.

Color key for the map mentioned above: Pale Blue: marks the 1943 -77 bypass alignment around Dwight.
Red line or gaps in alignment, is I-55, where it overlaps the old alignment.
Orange line: marks the 1926-43 alignment through Dwight.
Black are the sections that are missing.

Map with the alignment of Route 66 through Dwight

Below you will find More information on Route 66 in Dwight.

What to see in Dwight

US 66 in Dwight: historic context

After his drive from Chicago to Los Angeles, Jack DeVere Rittenhouse published his memorable "A Guide Book to Highway 66" in 1946. It has the following entry for Dwight:

Drive US 66 through Dwight

Drive from north to south, coming from Gardner. It is knwon by the motto "Not Just A Bump in the Road" and also as the "First traffic light south of Chicago" (on some postcards it figures as "First stoplight from Chicago").

Our itinerary through Dwight begins on the north side of the town, where both 1926-43 and 1944-77 alignments meet. Here the "Bypass 66" continues straight, and the older "City 66" forks to the left as South Brewster Rd. Take it.

It runs beside the railroad tracks and just ahead merges into Illinois State Hwy 47. Driving along IL-47 to your right, is a former Coffeehouse and gas station site on Bypass 66:

The Coffeehouse was one of several in Illinois, located on the NW corner of the junction of US 66 and State Hwy 47. More recently it became Pete's Pancake, which also closed. 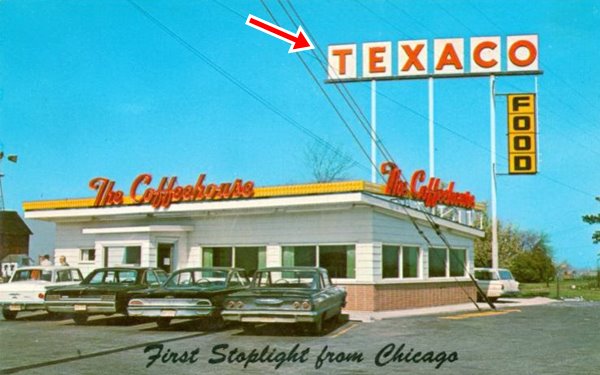 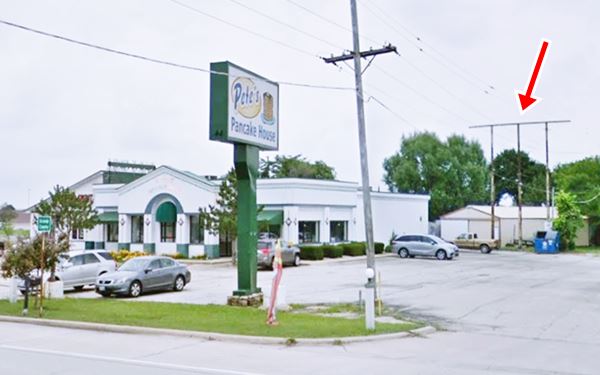 Continue southbound along IL-47 and when the state highway forks left along N Union St., continue SW along McNamara Ave. It will curve west along W Waupansie St. Here is a now gone classic: 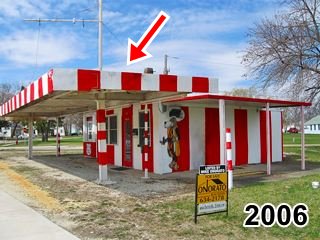 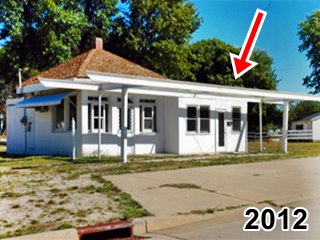 It has finally closed as you can see in the images above, it lost its charming red and white colors, then the flat canopy was removed and only the framework remained. Finally even this has gone. Time is inexorable and forgives nothing. 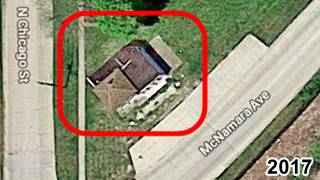 Continue west and take a left at N. Franklin to visit the downtown district. Two blocks ahead, on your right is the Historic Wood Church: 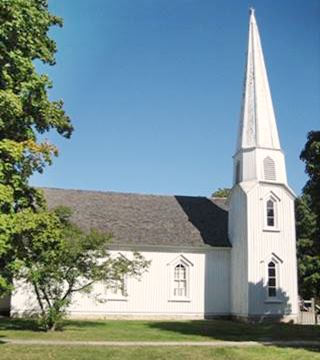 This is a wood framed Carpenter Gothic Church. It was built in 1857 by the local Presbyterian congregatoin. It has the unusual honor of having been visited by the Prince of Wales, Edward, son of Queen Victoria in 1860. It also survived several blazes that razed the town during that period.

At E. Seminole St., take a left and when you reach the tracks, look to your left, you will see a segment of a road running parallel to the railroad tracks, it is the original "Pontiac Trail" from 1915, which was paved back in 1918.

It later carried State Hwy 4 through town, but is now cut off in the business district. It continues on the south side of town as Odell Rd. (This is a Street view of the road here).

The 1926 alignment took another course, around the downtown district.

Retrace your steps and turn right, south along N Franklin St. and then continue along W Main St., here on the first block, to you right is the Historic Bank designed by Frank Lloyd Wright:

The historic bank which opened in 1906 does not have the classic Bank facade, intstead it has a solid and simple cut limestone facade.

Frank Lloyd Wright designed the building in 1904. It was built the following year. The structure housed not only Frank L. Smith's bank but also his realtor office. It was renovated in the 1950s.

In the 1960s its present owners, the First National Bank of Dwight removed the partition unifying bank and real estate sections. In the 1990s it was expanded to the left with a new structure that blended in with the original one.

Frank Lloyd Wright (1867 – 1959): an American architect, interior designer, educator and writer. He promoted "organic architecture" which harmonized design with the environment and the people who would use it and see it. More than 500 of his 10,000 designs were built.

Across the street is the historic railroad depot:

Dwight Station was built by the Chicago & Alton Railroad in 1891. It was designed in the Richardson Romanesque style by Henry I. Cobb.

Don't miss the fossil shells in the blue stone walls, they were brought from Indiana. Ithouses the Dwight Historical Society's museum and the local Chamber of Commerce.

Cross the tracks and head south along S. Paririe Ave. two blocks ahead is the historic Oughton House and Windmill:

The Windmill in Dwight

Part of Oughton's estate, it was built in 1896. It was originally known as "the pumping tower", it is the work of the US Wind, Engine & Pump Co., Batavia, Illinois. It pumps up water from a depth of 840 feet and stores it in an 88-barrel cypres tank.

The windmill is part of the Historic John R. Oughton House:

The property covers 7.2 acres (2.9 ha.) and the Victorian stle house (known as The Lodge or Keeley Estate) was built between 1891 and 1895. It was designed by Julian Barnes.

John R. Oughton lived here until his death 1925. Five years later it became part of the Keeley Institute an institution for the rehabilitation and treatment of alcoholism. It became a restaurant which closed in 2017 (Country Mansion).

The historic Windmill in Dwight in Dwight, Illinois

Having driven through the downtown area, return to the 1926-43 alignment by taking a right along W James St. and then a right, crossing the tracks along S. Washington St. Go north until you reach W Waupansie St. Turn left along it. The road curves 90° to the south in a sweeping curve and at its junction with State Hwy 17, on the NE corner of Route 66 and W Mazon Ave. is the best known sight in Dwight: The Historic Ambler's Texaco Service Station:

This gas station is also known as Vernon's Texaco Station and Becker's Marathon Gas Station. It was built by Jack Shore in 1933 but it was ran by Basil "Tubby" Ambler for almost 30 years, hence its name Ambler’s Texaco Gas Station.

Ambler operated it from 1938 to 1933. The structure was a "Domestic style" gas station adopted by Texaco to blend into the urban neighborhoods. In the 1940s with a gabled canopy and a wood clapboard house-like office.

The garge bay on the west side of the building was added in the 1940s. The station later sold Maratho Oil brand. It closed as a service station in 1999 and continued as a repair shop until 2002. Now it is Dwight's Visitor Center. 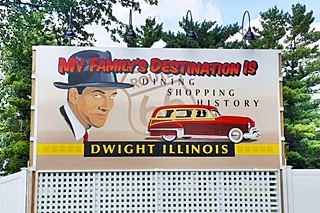 Just a few feet north of Ambler's is one of the Route 66 Wayside Exhibits, with two interpretative display panels and a the very photogenic billboard that says: "My family's destination is Dwight Illinois" with a 1950s look to it:

Drive south. There are more Wayside Exhibits at the site of a former motel, now gone. Drive south and you will meet the 1918 Pontiac Trail alignment on Odell Rd. coming from the left. The road now curves to the SW running beside the railroad. Just ahead it meets the 1943-77 Bypass alignment. Here is another landmark:

Odell Rd. and Historic US 66

There is a Wayside Exhibit here ( see its Location map), next to the parking area.

The lake was the borrow pit, which was excavated to provide road fil when the Bypass 66 was built around the town in the 1940s. It later filled with water and became a community park in the 1990s.

And this Ends your city tour of Dwight, head south towards neighboring Odell.

The original Route 66 alignment (Map 1926 US 66) passed near the downtown district but not through it. It is marked with an Orange line in the map above.

This alignment was used from 1926 until 1943. At that time the heavy truck traffic due to World War II detriorated the road so a new alignment was defined (Bypass 66) which also reduced traffic congestion in the town, by routing it around Dwight.

The road would become a four lane alignment with the addition of a second set of lanes in 1954. You can still see the remains of the abandoned lanes to the west of the present highway between the points where I-55 curves around Dwight. North and south of those points these lanes are now buried beneath the current northbound lanes of I-55

Drive from Dwight to Odell along US66

It is a short 9 mile drive from Dwight to Odell, see this Map with directions.

> > See the next segment Odell to Cayuga (west)