The village of Odell is the site of the Historic Standard Oil Gasoline Station, it also has more vintage service stations such as the Abandoned Old Mobil Station and the ruins of an Old Gas Station.
Don't miss the pedestrian underpass, the Odell Subway Tunnel built in 1937 under Route 66.

The Alignment of Route 66 in Odell

Odell is a village in north-central Livingston County; this is a Map of Odell.

See the History of Pontiac for a description of the early history of Livingston county.

A vintage car at the Standard Oil Filling Station in Odell, Illinois

When the first scant pioneers arrived in 1830, there were still Kickapoo Indians in Livingsgton County. But shortly after they were displaced west of the Mississippi River and eventually further west.

Livingstone County was established in 1837, but settlement would have to wait until the railway, authorized by the state legislature in the early 1850s, reached the area.

Two entrepreneurs and speculators, knowing this (they were James C. Spencer and Henry A. Gardner), had bought up the land on the proposed Chicago & Altona railroad's right of way in 1853. Spencer then sold his land to William H. Odell that same year and in 1855 Gardner and Odell became partners.

The town was platted in 1856 by Sydney S. Morgan who had bought Odell's share. It was formally organized in 1867.

The village of Odell was a farming community. In 1915 the "Pontiac Trail" a hard surfaced road built for cars was built through it. The Trail was later improved when State Highway 4 was laid along its alignment. In 1926 Route 66 was created absorbing the roadbed of former State Highway 4. Odell remained on US 66 until its decertification in 1977 once I-55 bypassed the town.

It was named for one of its founders. The surname is a place name: Odell (Bedfordshire), England, which combines the Old English word "wad" (woad a plant that provided a blue dye) and "hyll" (hill), so Odell was he who lived by the hill where the woad grows.

Odell: Hotels and Motels nearby

> > Book your hotel in neighboring Pontiac

Book your hotel in neighboring Pontiac

>> See the RV campground nearby in Pontiac

With a Humid Continental climate, summers in Odell are very humid and hot and its winters are quite cold and with plenty of snow.

Snow may fall between November and early April, and 26 inches (66 cm) fall on average each year.

Livingston county, where Odell is located gets around 6 tornado strikes each year.

How to get to Odell?

You can get to Odell by driving along Historic Route 66, from I-55 use Exit 209 into Odell.

Check out Odell on our Illinois Route 66 Map, with the complete alignment and all the towns along it.


Pale Blue: marks the 1943-77 bypass alignment.
Orange line: marks the 1926-43 roadbed in Odell.
Black are the sections that are missing.

Map with the alignment of Route 66 through Odell

Below you will find More information on Route 66 in Odell.

What to see in Odell

US 66 in Odell: historic context

Jack DeVere Rittenhouse published his "A Guide Book to Highway 66" in 1946 after driving along Route 66, and it gives us a good idea of what the towns along it werer like during the route's heyday. His entry on Odell says:

He does not specifically mention the famous Standard Oil filling station or the Mobile Gas Station, he does however mention a "garage".

Drive US 66 through Odell

Drive from south to north coming from Cayuga and our itinerary begins just past the point where I-55 curves away towards the northwest, and the old and now abandoned former southbound lane of Route 66 reappears to your left (this is from the period in the mid 1950s when US 66 became a "superhighway" shortly before I-55 was built). 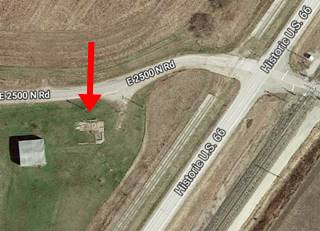 Satellite view of the ruins of a gas station, Odell, Il. Click for street view

These are the foundations of the gas station mentioned by Rittenhouse in 1946 (one mile south of Odell).

Drive north towards Odell. There is a fork ahead, to the left is the Bypass 66 built in 1943 with only two lanes and expanded to four in 1954, to keep traffic out of the town. To the right is the City 66, the original 1926 to 1943 road through the business district. Take it. It will curve to the west and enter the village. Ahead is the Historic Standard Oil Gasoline Station:

Built by Patrick O'Donnell in 1932, just six years after Route 66 was aligned through Odell. He used the 1910s "House and Canopy" or "Domestic" style, it was just that, a gabled house with a gabled canopy. The two garage bays were added later.

O'Donnell sold Standard Oil gasoline and oil, but later switched to Phillips 66 and Sinclair. In 1952 he rented it to Robert Close, who ran the cafe next to it and, after the death of O'Donnell, bought it.

Close sold gas until the 1970s and used the building as a repair shop. He sold it to the Village of Odell in 1999 who wanted to restore it.

Head into town along Old Route 66 and just ahead, next to the church is the Subway Tunnel:

Traffic through Odell along U.S. 66 was quite heavy (hard to picture nowadays as you gaze down the quite residential district's street), but at one time trucks and cars drove by constantly.

The students and those going to Saint Paul's Church had to dodge the traffic to get across the road, which was dangerous. So the authorities built a pedestrian tunnel which the locals named the "Subway", so that the neighbors could cross the street safely.

It was built in 1937 and remained in use until the Bypass Route 66 was built in 1944, this took the traffic away from the neighborhood. The tunnel was filled in in the 1950s, sealing it off.

The Route 66 Association of Illinois did their piece of archaeological work, and in 2006 dug up the first three steps, exposing the concrete structure and steps. They added new railings that are a replica of the original ones and completed their work with adequate signs about the pedestrian underpass.

The photograph belowshows some young children using the tunnel in 1937.

Continue northbound and on the next corner (NW) before reaching W Tremont St. is an old Mobile Gas Station:

This former service station has a two door garage with a box shaped building with a slanting roof. See the photo below by David Taylor

Route 66 now curves to the right into West Prairie St. winding its way through the town. Here it now heads due north along O'Dell Rd. to the point where the 1943 Bypass 66 forked off to the west, to circle around the town.

Keep heading north (actually east, because it is an even numbered U.S. highway and therefore runs East to West) and on the left side of the road are the now abandoned lanes of what was the Four-Lane divided highway that Route 66 had become in the mid 1950s.

This ends your drive through Odell Drive on, northbound to visit Dwight.

The original Route 66 alignment (Map 1926 road) passed through the downtown district and is shown with an Orange line in the map above.

This alignment was used from 1926 until 1943 when the heavy traffic due to WWII congested the town's streets and caused accidents along all of Route 66 in Illinois. The authorities decided to bypass the urban areas and upgrade the highway to a four-lane status.

The original road was left intact, and it became the "City 66", and a completely new two lane highway was built around the western side of Odell (map Bypass road), which is shown in Pale Blue in our map above.

The Illinois State Roadmap of 1945 shows the bypass as a simple 2 lane highway, but the 1959 shows a divided Route 66 circling round Odell: A second set of lanes was added to the original road in 1954-55 and it was then in the mid 50's that Route 66 became a divided highway.

This new bypass 66 remained in use until 1977 when US 66 was decertified and replaced by I-55 in Illinois.

Drive from Odell to Cayuga along US66

It is a short drive from Odell to Cayuga (only 5.5 miles), this is a Map with directions.

> > See the next segment Cayuga to Pontiac (west)