The small village of Braceville lies on both the 1926 through 1977 alignments of Route 66 and the 1940-77 ALT 66 alignment. Now it is the site of some Lost Bridges and a "Fossil Hunters Paradise": Mazonia-Braidwood State Fish and Wildlife Area.

The Main Alignment of Route 66 in Braceville

Braceville is a village in norteastern Grundy County. See this Map of Braceville.

For an early history of the area, read this: History of Grundy County.

The first settler in future Braceville was Rev. L.S. Robbins; he was a pioneer in what was known then as "Sulphur Springs" in 1834. He was followed by J. Cragg in 1834, who opened a tavern. B. R. Dowd arrived in 1848, and became the township's first supervisor. He named it after the town he had lived in back in Ohio: Braceville.

N. Cotton platted the village of Braceville in 1861. It had been several years since the Chicago & Alton Railroad passed through the town. But it got its economic boom-bust period after coal was discovered by chance just north of Braceville in the early 1870s.

Coal brought work and prosperity as well as a large influx of miners, the population grew and so did the town peaking at 3,500 in the late 1870s. The 1910 strike of the Braceville Coal Co. miners brought an end to this: the company shut down operations and moved elsewhere. The unemployed miners moved to new mines and the town was virtually abandoned.

Braceville is a township in Trumbull County, Ohio, named for Jonathan Brace. Brace is a surname that may derive from an occupation: the maker and seller of armour designed to protect the arms ( from Middle English "brace" which comes from Old French "brace": from the Latin "bracchia": arms). It also could have been the nickname of a person with deformed or large, strong (ie. Armstrong)

Braceville: Hotels and Motels nearby

> > Book your hotel in neighboring Wilmington

>> See the RV campground nearby in Braidwood and also in Joliet

Braceville's climate is humid and continental; with very well defined seasons: Spring is cool and wet; summer is hot and frequently humid. Winter is cold and has on average 28 inches (71 cm) of snow, while autumn is very mild.

Snow: In Braceville you can expect snow from October to April, however usually the first snow falls in Nov. and the last happens in April (usually one quarter inch -8 mm).

Braceville's area is hit by some 5 tornados each year.

How to get to Braceville?

You can get to Braceville by driving along Historic Route 66 of from I-55 using the nearest exits: 227 in Gardner or 233 in Braidwood.

Map of Route 66 through Braceville in Illinois

Below you will find More information on Route 66 in Braceville.

What to see in Braceville

US 66 in Braceville: historic context

Jack DeVere Rittenhouse published his classic "A Guide Book to Highway 66" in 1946 and it describes US66 during its post-WWII heyday. He mentiones Braceville as follows: "few gas stations; cafes; small garage.... like Godley, this town is but a remnant of a once-thriving coal town. As you leave town, the typical slag-heaps still blot the countryside".

Drive US 66 through Braceville

There are no remnants of the gas stations, cafes or garage mentioned by Rittenhouse. Braceville is a small community on the western side of the highway. You can drive north along the original US 66 (1926-39, later US ALT 66 from 1940 to 1977) which runs along the south side of the railroad.

The later US 66 (1940-1977) which runs along the north side of the tracks can only be accessed at County Rd. 8000E, at Braceville; you can turn south and drive along it, but it ends south of Braceville, cut off from the alignment which runs north from Gardner because two bridges have been removed and not replaced:

Bridges that have gone

North of Gardner, at Mazon River, the former US 66 (1939-57) ends by the river, cut off because its bridge has been removed. See this Street View at the dead end on the south side of y Mazon River.

Across the river, there was a now gone steel arch bridge over the railroad, built in 1939. This now abandoned alignment is IL-129.

After crossing the river the now cutoff roadbed crossed the railroad that branched off to the north towards Coal City along a steel arch bridge built in 1939 to make travel safer and avoid a grade crossing. This bridge was removed in 2001 and has been lost. The road continues just north of the site of the former bridge (pictured below) at E. Huston Rd.

So you will be driving north (east) from Gardner along what used to be ALT 66 to the east of the abandoned alignment. The highway you are driving is now IL-53. It crosses Mazon River on a new bridge (1969) which replaced a 1920s? bridge of the original alignment.

Just 0.9 mi. north of the Mazon River bridge, to your left is a Natural Wildlife Area:

Strip mining for coal and shaft mining altered the region's topography. Pits and shafts cover the area and the large sections of land dug up for coal later filled with water. Slag heaps remain like small hummocks. After being abandoned after 1910, the land reverted to a natural state. Unfit for farming, trees covered the area, now it is a hunting and fishing wildlife area.

You can hunt for fossils (permit required): collectors come from all across the country. The Tully Monster fossil was discovered here by Francis Tully in 1957.

Jellyfish imprints and shrimp fossils are abundant: strip mining upturned the strata from ancient seabeds, bringing these layers to the surface, now piled up as slag piles.

The Tully Monster (Tullimonstrum gregarium) lived in shallow coastal waters 300 million years ago and was a type of jawless fish similar to a lamprey. Read more Scientific American article.

This short drive marks the End of your tour through Braceville, head north towards neighboring Godley.

Illinois funded its state highway system by issuing a bond in 1918, this resulted in SBI 4 (State Bond Issue) highway number 4 being built along the former "Pontiac Trail" from Chicago to St. Louis. By 1923 it had been totally paved and in 1926 Route 66 was created and aligned along it.

The original Route 66 is present IL-53, running along the eastern (or southern) side of the railroad from Braidwood to Gardiner.

In the late 1930s it was realigned north of Braidwood, creating a faster and far straighter road through Plainfield, bypassing Joliet and Wilmington: 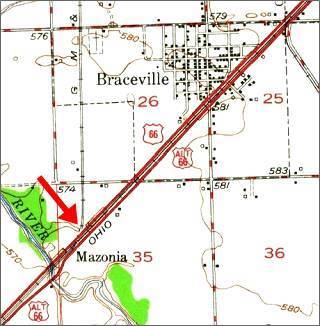 This is marked with a Green Line in the map.

The "new" highway from Plainsfield to Gardner became Route 66 (it ran on the western side of the railroad).

The 1926 alignment from Gardner to Romeoville through Joliet became ALT US 66 and remained so until 1977.

Both alignments met on the southern side of Gardner.

The USGS Map of 1945 shows how both roads US 66 and US ALT 66 run past Braceville. The Red arrow marks the site of the now gone steel arch bridge.

In 1958 US 66 was moved further west to a new alignment bypassing the towns from Braidwood to Gardner. Route 66 shared the road with the new freeway (I-55). To the north it also bypassed Plainfield as it took a shorter eastern course into Chicago.

In 1959 the American Association of State Highway and Transportation Officials (AASHTO) came up with the "Alternate" designation.

It was to be used to designate a highway that branches off from the main one, passing through certain cities and then links up with the main route again.

If the Main and alternative routes followed a similar course, the better built or shorter highway would be the one marked as "Main", while the other would become the "Alternate" one.

So, for this reason, once a better built, shorter and also straighter alignment was completed from Braceville through Plainfield to present Wellco Corners, it was designated as US 66 and the older alignment through Joliet became the ALT 66.

The new main Route 66, ran along a new road that had been built parallel to the old one, on the western side of the railroad, between Braceville and a point just north of Braidwood. Here it turned sharply and took a straight course northward, crossing the Kankakee River and passing by "Blodgett", then it crossed the Des Plaines River and intersected US 6, passed by "Birds", intersected US 52 and finally reached Plainfield where it met US 30 and turned with a northeastern course towards Cicero and Chicago. It met the ALT 66 at Wellco Corners.

There were only three places along Route 66 where an Alternate alignment existed: this one into Chicago, one in Oklahoma City and the one leading into Los Angeles CA.

Alignments South of the Kankakee River

Drive from Braceville to Gardner along US66

It is almost 4 miles from Braceville to Gardner, see this Map with directions.

> > See the next segment Gardner to Dwight (west)