Oro Grande is a small town on Route 66 just north of the 1930 Route 66 Oro Grande Bridge across the Mojave River; Visit its attractions: the Mohawk Service Station, the old La Delta Service Station and Auto court, the famous The Iron Hog Saloon and the now closed Route 66 motels, the Paradise Motor Inn and the Motor Inn.

Oro Grande is an unincorporated community located on Route 66 on the city boundary of Victorville and Adelanto, insouth western San Bernardino County in the south of California. (Map of Oro Grande).

The History of Oro Grande, California

Visit our Victorville web page to learn more about the early history of this area.

The Mojave Trail was first used by Father Garces in 1776 en route to the Hopi nation in Arizona. It linked Spanish colonies in New Mexico, Arizona and California, crossing the Mojave desert to the north of the present US 66 and I-40.

The Native Americacans in the area used this trail from Cajon Pass (a gap between the San Bernardino and San Gabriel Mountains in the south) to the Colorado River following the Mojave River across the Mojave Desert.

The first American to trek it from east to west -from Utah- was Jedediah Smith in 1826. At that time the territory was Mexican who had acquired it from Spain after its independence in 1821.

Mexican traders in New Mexico in the late 1820s opened the "Old Spanish Trail" which met the Mojave Trail at Soda Lake in the Mojave.

During the Mexican - American war (1846-48), the Mormon Battalion used the trail into California and, after Mexico was defeated, it ceded the territory to the US.

Settlers used the trail to reach California and many Mormons settled along the " Mormon Corridor " (areas settled from 1850 to 1890 by the members of The Church of Jesus Christ of Latter-day Saints, commonly known as Mormons). In 1851, the Mormons bought the San Bernardino ranch and founded the town of San Bernardino.

The first settler in Victor Valley was Aaron G. Lane, he set up his homestead on the Mojave River, next to its lower crossing -close to what is now Oro Grande in 1858. He had a way station and offered lodging and groceries to travellers trekking along the Mojave Trail. He catered to Lt. Edward Beale during his expedition (1860), and grew alfalfa as fodder for the horses. The place was known as Lane's Crossing for many years.

Gold was discovered in the area in 1873, and a gold mining camp was established here in 1878 about 2 miles north of Lanes post. The post office that opened in 1881 was named " Halleck " after the mine's stamp mill chemist. The name lasted until 1927 when both town and post office were renamed "Oro Grande".

The Railroad in Helendale

In 1881 the Southern Pacific Railroad (SP) extended its line from Bakersfield east after silver was found near modern Barstow at Calico. SP continued its line all the way to Needles to block the entry into California of its rival the Atlantic & Pacific Railroad (A & P) a company which later was absorbed by the Atchison Topeka & Santa Fe Railroad.

In the meantime A&P laid their tracks across Kansas, New Mexico and Arizona and after crossing the Colorado River, reached Needles in 1883. They did not stop there and the following year they threatened to build a line parallel to that of SP and forced them to sell the Barstow - Needles railroad. Once in Barstow, A&P turned south and built a line across Cajon Pass into San Bernardino. The line completed in 1885 ran along the Mojave River, following the old Trail.

The railroad built a station as a watering stop for its steam powered locomotives, and named it "Halleck".

The town was named after the neighboring mine and it combines two Spanish words "Oro" (gold) and "Grande" (big), hence "Big or large Gold".

Limestone was quarried here in 1887 and kilns were built to produce lime. Cement was produced after 1907 by the Riverside Cement Co., still operating.

In the early 1900s, the use of the automobile began to grow and better roads became necessary. The National Old Trails (N.O.T.) planned a road from Los Angeles to New York, and they aligned it next to the AT & Santa Fe railroad tracks from Cajon Pass to Needles. The road passed through Oro Grande.

The 1912 map by the Automobile Club of Southern California (ACSC) showing the road from Barstow to Victorville did include Oro Grande -with no services- followed by Victorville (5 mi.), which had "Gasoline"

In 1926, the N.O.T. highway became part of the US highway network and the section west of New Mexico became US 66. Nevertheless Route 66 was known as the "National Old Trails Road" for many years in California, at that time the N.O.T. guidebook tells us that Oro Grande had a "Camp ground and store and garage".

Oro Grande is mentioned in the 1939 "Guide to the Golden State" published by the WPA: "In the shade of wide-spreading sycamores and spirelike poplars, ORO GRANDE, 31.7 m. (2,648 alt., 600 est. pop.), sprawls along the highway, dreaming of the prosperous gold-boom days of the 1880's. Its population skyrocketed to 2,000 when in 1878 gold was discovered in the OLD SILVER MOUNTAINS and the GRANITE MOUNTAINS (L). After 1885 gold production diminished until in 1928 the last of the mines closed.".

After the second World War, traffic along Route 66 grew and in 1960 traffic through Oro Grande topped 1.1 million travellers. A safer highway was necessary and the interstate system created in 1956 would replace Route 66 between Barstow and Victorville (I-15) bypassing Oro Grande. The town lost its service stations and stores that catered to the travellers.

Where to Stay in Oro Grande

Lodging near Oro Grande at Helendale, Barstow or Victorville

> > Book your Hotel nearby in Barstow,
Helendale
or
Victorville

Book your hotel in neighboring Barstow

>> Check out the RV campground in Victorville

The Weather in Oro Grande

Oro Grande has a semi-arid climate, winters are cool and summers are very hot. Rainfall is scarce and snow is very uncommon.

Oro Grande is located west of the Rocky Montains and there is virtiually no risk of tornados here.

Getting to Oro Grande

You can reach Oro Grande along old Route 66 which here is named "Old National Trails Highway". Also from I-40 in the northeast or from I-15 (north, east and south).

The Map of U.S. 66 in Oro Grande, California

Check out Oro Grande on our California Route 66 Map, with the complete alignment and all the towns along it.

Below you will find detailed information on Old Route 66 in Oro Grande.

Sights and Attractions in Oro Grande

Landmarks and things to see

Oro Grande and its Route 66 attractions

At Oro Grande do visit the famous The Iron Hog Saloon and see its classic La Delta Service Station and Auto court and Mohawk Service Station. Stop at the now abandoned Paradise Motor Inn and Motor Inn motels and drive across the 1930s Route 66 Oro Grande Bridge over the Mojave River.

Start your tour of the Oro Grande section of Route 66 at the old US 66 underpass (it was built to avoid a graded crossing -level crossing- of the SF Railroad tracks, making the Mother Road safer for the hundreds of thousands of travellers who drove along it every year) that is just north of Oro Grande.

Head north and after 1.5 mi. on your left you will see the famous biker stop, " The Iron Hog Saloon ":

See a photo of the Saloon Above.

At one time it was the dealership of Case Farm Equipment in Oro Grande. (1930s-40s), perhaps the Oro Grande Farm Implement Co. The building has been in the family since 1944. Later it was known as the "Lost Hawg". It is a bar and restaurant offering steaks and more uncommon ostrich steaks (from a nearby ostrich farm).

Continue north and 2.2 mi. from the underpass you will reach the fomrer La Delta gas station :

Now it is a private residence but at one time it was known as "Pinky's Service Staton" opened in the 1920s by Theodore Simon (Pinky) Ruiz, the constable at Oro Grande.

Pinky sold out in 1931 (perhaps he couldn't weather the Depression any longer) to the Dickens, who in turn sold the place in 1932. They had named it "La Delta" and the name survived, naming the area where the service station was located.

The place had a cactus garden, a store which together with the service sation have been razed. The cabins of the auto court survived.

This Baltimore truss bridge is located in Oro Grande -Victorville- and is 575 ft. long with a deck 34 ft. wide. Its longest span measures 270 ft.

It was built in 1930 to carry U.S. highway 66 across the Mojave River. It is known as the "Victorville Route 66 Bridge" and the "Oro Grande Bridge". 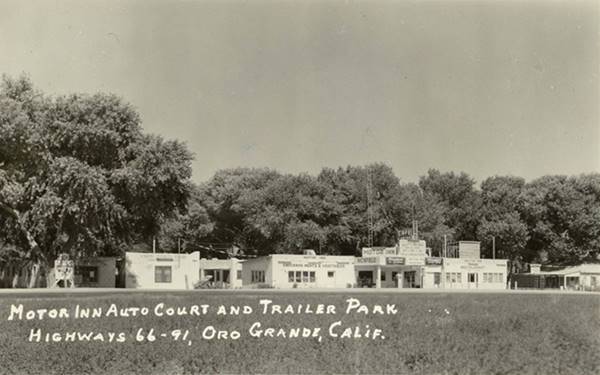 Head back towards Oro Grande and after passing through the underpass, the road curves again towards the left. There, at the curve, nestled among green trees are what seems to be the remains of a Route 66 auto court.

When Jack Rittenhouse drove through the town in 1946 he pointed out that the only lodging was "... one trailer camp with a few cabins", very likely this one.

Truman "Warren" Phinney (1919 - 2008) a World War II veteran purchased, in 1955, a grocery store, and gas station in Oro Grande on Hwy 66, the Motor Inn. Later he owned a liquor store in Victorville. The description fits the image (and the establishment's name too - Motor Inn), as does the decorated shape of the building facade.

It is 0.6 miles south of the underpass.

Mohawk was a California based refiner and distributor of gasoline. Their refinery, built in 1932, was located in Bakersfield and their corporate offices were in San Francisco.

They later became a second brand of Tidewater Associated. Getty acquired Tidewater in 1956 and in turn was bought by Texaco in 1984. In the middle of these changes the service station closed and now lies abandoned.

Juding from the 1970 style pumps and the prices displayed on them, the Mohawk gas station has been closed for a long time.

Then come a series of old stores with brick facades dating back to the early 1900s, long before Route 66 was created. Ther are several antique shops in town and a red train caboose.

The cement factory looms over the town and the highway.

Keep southbound towards Victorville, and 1.8 miles from the underpass is what appears to be the former Paradise Motor Inn :

2.9 mi. south of the underpass, the road curves into the Mohave River, which here does carry water year-round because of the bedrock under the river bed. To the north, when sand replaces the bedrock, the river flows under the surface.

The banks of the river are verdant and forested. Here is the Mojave River truss bridge .

This is the Map with directions.

This Baltimore truss bridge is located in Oro Grande -Victorville- and is 575 ft. long with a deck 34 ft. wide. Its longest span measures 270 ft.

It was built in 1930 to carry U.S. highway 66 across the Mojave River. It is known as the "Victorville Route 66 Bridge" and the "Oro Grande Bridge".

Book your
Hotels in

The Alignment of Old Route 66 in Oro Grande

From Barstow to Oro Grande

As mentioned above, the first road through Oro Grande was the National Old Trails (N.O.T.) road which was a highway that was projected to link New York and Los Angeles in the early 1910s. This road ran close to the Santa Fe Railroad between Victorville and Needles.

There is a 32.5 mile drive from Barstow to Oro Grande along the old US 66.
this is the Map.

> > See the next segment San Bernardino to Victorville (west)