Albatross is a very tiny community, not even a village, located on U.S. 66 with some classic Route 66 attractions: Miller's Station the remains of Adamson Oil Co. and Jim Moot's Auto Body.

Albatross is a small village on Old Route 66 in Lawrence County, in southwestern Missouri. (Map of Albatross).

Learn more about the history of Albatross in our Carthage Missouri page.

The county created in 1845 was named after James Lawrence a seaman from the English-American War of 1812. After the Civil War, the town of Miller was platted nexts to the station of the St. Louis & San Francisco Railroad which crossed the county from from Mt. Vernon and Aurora in the South to Greenfield in Dade Co. in the north.

County trails linked Miller with Rescue, Phelps and Spencer. The post office at Miller opened in 1891.

When Route 66 was created in 1926 it ran along the Ozark Trail highway which had been built in 1913, two miles south of Miller. The bus service of the Albatross Bus Line Co. established a stop at the crossroads of State Highway 39 ant U.S. 66. The town of Albatross had been born.

The village was named after the Transcontinental Albatross bus line which was established here, on Route 66, and served the neighboring town of Miller.

The word albatross comes from Spanish "alcatraz" (pelican) from the Arabic "al-ghattas" (sea eagle). Somehow the Latin word for white (albus) influenced the spelling and then the English sailors applied the name to another sea bird, becoming "albatross".

Those travelling along Route 66 promoted the local economy and some grocery stores and service stations opened in Albatross. But after 1958 the town and Route 66 were bypassed by I-44, which ran from Joplin, eastwards along what used to be US-166, south of Albatross into Springfield.

Where to Lodge in Albatross, Missouri

More Lodging near Albatross along Route 66

Motels and Hotels close to Albatross

Weather widget for Avilla, the town nearest Albatross, to the west

Albatross is located in Missouri' "Tornado Alley"; Lawrence County has an average of 8 tornado strikes per year.

You can reach Albatross along historic Route 66 and Interstate I-44 that links it with Tulsa and Oklahoma City in the west and with Springfield and St. Louis in the east. U.S. Route 71 (overlapping I-49) links it with Fort Smith, Arkansas and Kansas City.

Map of Route 66 through Albatross Missouri

Route 66's alignment in Missouri: the Historic Route 66 through Albatross

Albatross and its Route 66 attractions

"A Guide Book to Highway 66" written and published by Jack DeVere Rittenhouse in 1946 provides us with an insight into U.S. 66 during its golden days.

Rittenhouse mentions the village as follows: "Albatross... Garage, several gas stations, cafes and Carver's cabins." he adds that it was located at the crossing of U.S. 66 and MO-39.

Tour the route 66 landmarks in Albatross

Also known as Morgan's DX it is a wood frame building with stucco walls and a hipped roof. It was built ca. 1945 and the flat roofed canopy added in the 1970s.

It was always a service station. You can see it on the south side of the road with an unpaved overgrown circular drive. 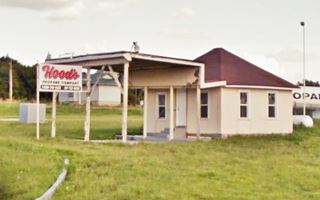 View of Miller's Station, Click on image for Street View

You will see two buildings. The eastern side is the original 1930 building with a triangular parapet and glass panels flanked to the west (right) by a 1949 addition which increased the storage space. Built in concrete blocks with a round roof.

Also known as Albatross Store it was owned by Mr. Wilson. There is a parking area in front of the store and a gravel drive. See its photo at the top of the page.

On the south side of the road. Now gone but you can still see the drive and the concrete base of the 4-pump island and the foundation of the office. It was a simple filling station built in 1950 and was one of six gas stations in Albatross. See its street view.

From Halltown to Albatross

Route 66 was created in 1926 and aligned along the Ozark Trail from St. Louis MO to Romeroville NM, passing through Albatross.