Rescue is a very tiny community, located on U.S. 66 known for two landmarks: Reed’s Cabins, Brown's Garage and the former Shady Side Camp which was a café, cabins and service station station.

All you need to know about Rescue

Rescue is a small village on Old Route 66 in Lawrence County, in southwestern Missouri. (Map of Rescue).

Learn more about the history of Rescue in our Carthage Missouri page.

There is no record of the name, which according to some sources comes from the rescue of a pioneer family, who was in dire straits in the area (maybe beseiged by the natives).

Shortly after, Shadyside Camp (also written Shadyside) opened to the west of town. Travellers along Route 66 kept business alive during the hard days of the Great Depression in the 1930s and thrived on Post World War II travel. But in the late 1950s, I-44 bypassed the area siphoning traffic away from U.S. 66.

Where to Lodge in Rescue, Missouri

More Lodging near Rescue along Route 66

Motels and Hotels close to Rescue

Weather widget for Avilla, the town nearest Plew, to the west

Rescue is located in the infamous "Tornado Alley", and Lawrence County has around 8 tornado strikes per year.

Map of Route 66 through Rescue Missouri

Route 66's alignment in Missouri: the Historic Route 66 through Rescue

Rescue and its Route 66 attractions

Rescue on Route 66 in Missouri consists of a few scattered houses and buildings. See its Brown's Garage, Reed’s Cabins, and the former Shady Side Camp cabins, café and gas station.

Jack DeVere Rittenhouse mentions Rescue in his 1946 book "A Guide Book to Highway 66" giving us an idea of what Route 66 was like in those days: "Rescue. (Brown's garage, Reed’s Cabins) A small village with a few homes and a couple of groceries." He added that one mile west was a gas station and Shadyside Camp, followed two miles west (in what is now Plew) by more gas stations.

Tour the route 66 landmarks in Rescue

County Road 1214 and MO-96 -Old Route 66 mark the point where Rescue is located. Reed's Cabins are still there and so is Brown's garage still stands: 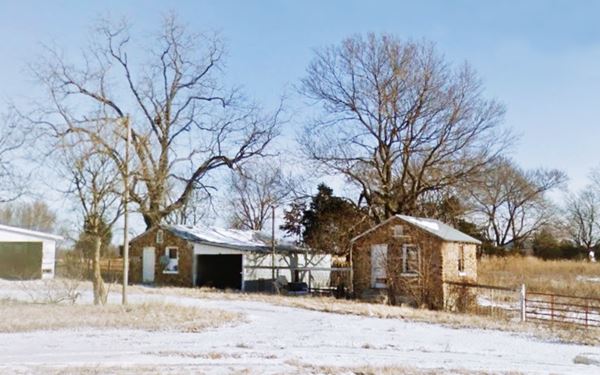 There are two stone wall, wood frame gabled cabins (a third was razed in the '80s) are now private propery. To the west is the former cafe, now a stone-faced residence. The cabins were built ca.1926 and owned together with the cafe by Roy Rogers and his wife.

Just to the west of Reed's. This white building on the north side of Route 66 is the garage mentioned by Rittenhouse. See photo above.

It has two bays in the repair shop area. Perhaps it was the service station ran by the Rogers.

Head west towards Avilla and Carthage and just one mile from Rescue, to your right (north) is the Shady Side Camp cabins and former service station:

The postcard below names it "Clay’s Shady Side Camp" but Rittenhouse in his 1946 book calls it "Shadyside Camp" (in one word).

L. F. Arthur buitl Shadyside Camp in 1927, he used local rocks and erected four cabins, which survive until this day.

The gas station with a café which faced the road is still standing, but as you can see by comparing the postcard below with its present appearance, the gabled canopy that stood over the gas pumps, has now gone.

The buildings were arranged around a central court area. Map with location.

In 1946, Rittenhouse described it as "Gas station; also Shadyside Camp."

From Halltown to Rescue

Route 66 was created in 1926 and aligned along the Ozark Trail from St. Louis MO to Romeroville NM, passing through Rescue.