Phelps is a very tiny township on Old Route 66 in Lawrence County, in southwestern Missouri. (Map of Phelps).

Old building ("Beer" written on wall) on Route 66 in Phelps

Learn more about the history of Phelps in our Carthage Missouri page.

The post office opened in 1854 and was known as Stalls Creek until 1857. Then it became Phelps, unitl 1922 when it closed. It is said that the town is named after Col. Bill Phelps, an attorney who secured the Post Office for the town, but that is not true since he was born in 1845 and would have been 12 at the time the post office opened.

Col William "Bill" Phelps (1845 - 1916). Lawyer, lived in Carthage MO. for manyyears, after 1872, he served as representative in the Missouri House of Representatives and in the State Senate.

Phelps is a surname in Western Englnad, derived from Phillip, and means Phillip's son:"Phel(i)p's"

The Ozark Trail was aligned through the town in the 1910s, linking it with Carthage and Sprigfield and in 1926 U.S higway 66 was created and routed along the Ozark Trail. Travel along the U.S. 66 gave helped the locals during the Depression in the 1930s. After 1958, traffic dropped off as it took to I-44, which had opened in 1958 between Joplin and Oklahoma City and to the east followed former US-166, south of Phelps into Springfield.

Where to Lodge in Phelps, Missouri

More Lodging near Phelps along Route 66

Motels and Hotels close to Phelps

Weather widget for Avilla, the town nearest Phelps, to the west

Phelps inside the "Tornado Alley" and Lawrence County has is hit by some 8 tornados every year.

You can reach Phelps along historic Route 66 and Interstate I-44 that links it with Tulsa and Oklahoma City in the west and with Springfield and St. Louis in the east. U.S. Route 71 (overlapping I-49) links it with Fort Smith, Arkansas and Kansas City.

Map of Route 66 through Phelps Missouri

Route 66's alignment in Missouri: the Historic Route 66 through Phelps

Phelps and its Route 66 attractions

Phelps lost part of its Main Street during the 1955 realignment of Route 66. See Henson Building (a hotel), Phelps School built in 1889 and the Site of Bill's Station and west of town, an Old Store & Service Station.

In his 1946 book "A Guide Book to Highway 66" Jack DeVere Rittenhouse describes the "classic" Route 66 and mentions the small town as follows: "Phelps. Gas stations, cafe, a few homes, and two very old store buildings..." he added that there was was no lodging there, but a gas station 3 miles west (that is, roughly one mile east of Rescue).

Tour the route 66 landmarks in Phelps 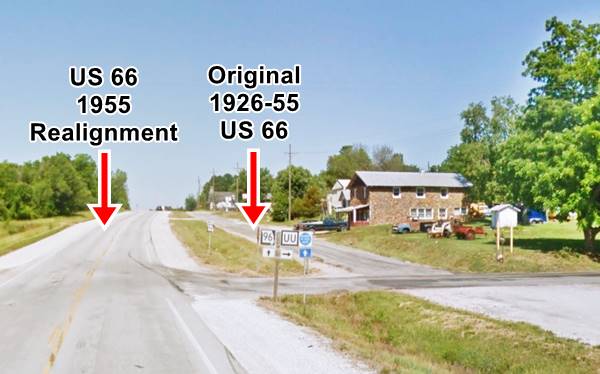 You will notice that the town's buildings are on the north side of MO-96, next to a frontage road and that there are no buildings on the south side of the higway. This is so because the frontage road was the original alignment of U.S. 66 through Phelps. It was "straightened out" in 1955 and in the process, all the buildings lying in the way of the new (present) alignment were demolished, these included the Texaco service station and café owned by Harry Parkhurst and his wife, as well as their house (which they upped and moved to neighboring Albatross). You can see an Old Photo of the south side of U.S. 66 prior to its realignment.

At the eastern end of town, on the northwestern corner of UU Rd. and Route 66 was the now gone Bill's Station:

The service station was a very small building belonging to Bill Tiller, from the 1920s. It gradually fell into decay as you can see in the image below, showing it still standing in 2012, but gone, fallen into a pile of rubble in 2016. Another Route 66 icon gone forever:

Site of former Bill's Station on Route 66 in Phelps 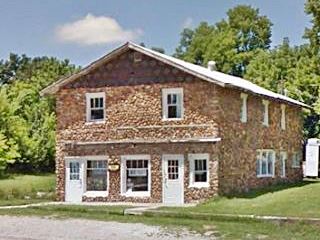 This is a two story building which used to be a hotel. It has 14 rooms (6 on the second floor). Built ca. 1924 in cobblestone with a broad pitched roof.

It was specially built to lodge Route 66 travellers. Owned by John and Belva Henson it also had a restaurant, barber shop and store. Local myth says that 1930s gangsters used to stop here to spend the night.

Head west and, to your right, is the Old school: 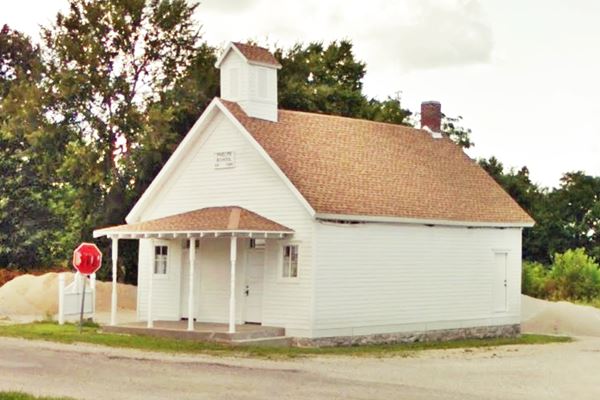 It was a one-room school built in 1889. It was located on the old 1926 alignment of Route 66 and during the 1980s was abandoned. It fell into disrepair but was restored recently to its former appearance.

Head west of Phelps, and roughly one mile towards Rescue is a Old building:

One mile west of Phelps to your right. North side of US 66, Map with location.

The building dates back to 1942 may be the service station mentioned by Rittenhouse in 1946 which was precisely one mile west of Phelps. The word "Beer" is clearly visible on its eastern facade. See photo of the store at the top of the page.

Later it was a restaurant and after 1968, a private residence.

From Halltown to Phelps

Route 66 was created in 1926 and aligned along the Ozark Trail from St. Louis MO to Romeroville NM, passing through Phelps.

The 1926 roadbed was left in place as the north frontage road during the 1955 realignment of Route 66 through Phelps.