Sullivan has its share of Route 66 attractions and landmarks, Motels: the Site of Sunrise Motel, the Hi-Lo Motel, Grande Courts and the Shamrock Motel.
Don't miss the Historic 1856 mansion: Harney House and two cemeteries: Sullivan IOOF Cemetery and the Martin Family Cemetery, drive across the old 1922 Route 66 Bridge and enjoy the outdoors at Meramec State Park.

Sullivan is town on Route 66 which spreads from Franklin County into Crawford County, in the central Missouri Ozarks foothills. (Map of Sullivan).

This part of Missouri has been inhabited for since the last Ice Age, ten thousand years ago. In more recent times, the local Native Americans were an Algonquin nation known as "Illinois" (name that was deformed from the word they used to call themselves: "Illiniwek" which meant "men").

The French from Canada explored the area and claimed it for France in 1683. It was named it after their King Louis XIV ("Louisiana"). Later France ceded it to Spain, and the Spanish built a fort in the area (San Juan del Misuri) in 1796. Napoleon recovered it during his wars, in 1800 but, needing money to continue fighting, sold it to the U.S. in 1803.

In 1812 this part of Louisiana was organized as the Missouri Territory (1812); Franklin County was organized in 1818, named after Founding Father Benjamin Franklin, and the State of Missouri was admitted into the Union in 1821.

The first settler in the area was Uriah Burnes ca.1829. and shortly after, during the 1830s, the Illinois, who were peacefull hunter-gatherers and squash, beans and corn farmers, were relocated together with all the other Natives that had lived east of the Mississippi to reservations in the Indian Territories (which later became the state of Oklahoma).

German immigrants settled in the early 1830s and introduced grapes producing wine in the "Missouri Rhineland" and later they would side with the Union against Southern slave-owning settlers during the Civil War. The first post office opened in 1856 and was named "Mount Helicon" (the mythical Greek mountain that was home to the Muses). But it lasted for three years: in 1859 it was renamed "Sullivan".

Stephen and Dorcas Sullivan bought 169 acres of land and donated part of it to the railroad. Stephen built the first railway station too. The "Frisco" railroad named it after him, and that led to the change in the post office name. Sullivan is a Gaelic name from Ireland (O Suileabhain) that comes from the word "suil" = "eye".

It was a farming community located on the main road linking St. Louis with Springfield (the "Wire Road" because it ran next to the military telegraph line). Later Route 66 was aligned along that same road (1926) and it brought a flow of visitors who lodged in the town, used its gas stations and cafes. This would continue even after the road was realigned on the town's western outskirts in the 1950s. Today I-44 runs on the later US 66 roadbed.

Where to Lodge in Sullivan, Missouri

Accommodation and hotels in town

More Lodging near Sullivan along Route 66

Find your hotel in Sullivan:

>> Check out the RV campgrounds in Sullivan

Sullivan has well marked seasons, which are the combination of humid continental and humid subtropical climates.

Sullivan is located in Missouri's "Tornado Alley" and Franklin County is struck by some 7 tornados every year.

Map of Route 66 through Sullivan Missouri

See the alignment of US 66 in Sullivan, on our Missouri Route 66 Map, it has the complete alignment across the state with all the towns along it.

Below is the color key for Route 66’s alignment in Sullivan:

Route 66's alignment in Missouri: the Historic Route 66 through Sullivan

Sullivan and its Route 66 attractions

"Missouri, a guide to the "Show Me" state" a guide published by the WPA in 1941 mentioned is two shoe factories and its history, and the 1946 book written by Jack DeVere Rittenhouse ("A Guide Book to Highway 66") tells us that it had "... Campbell Chevrolet Co. garage; Grande Courts, Sullmo Cabins; cafes.)". He added that the town's business district was off US 66, the highway only "touches the western edge of town". He mentions that Meramec State Park entrance was just north of town, and gives a description of the park and the famous cave.

Start your tour in eastern Sullivan, heading west from neighboring Stanton. First you will cross the old Bridge:

This concrete girder bridge is located to the east of town and spans Winsel Creek, it predates Route 66 by four years. This is its Street View.

Drive into the town along Route 66 and at N. Church, take a right:

This Cemetery has the grave of James ("Sunny Jim")Leroy Bottomley (1900 – 1959), professional baseball player. Elected to the National Baseball Hall of Fame in 1974,in 1924 he set the record for 12 RBI's (Run batted in statistic). He retired to Missouri and is buried here in Sullivan with his wife.

Turn back, here you can take a detour and drive to visit a historic building from the 1850s:

Alternatively you can visit some Route 66 classic Motels:

W side of Elmont Rd. Overpass at I-44 westbound lanes (Map with location).

It is on to your left. The Sunrise motel was demolished in 2007 when the overpass was built. The signs have also gone. All that remains is the concrete drive of the motel.

Head west along the N. Service Road for 1.1. mi. to visit another Route 66 Motel:

This former motel (now it has apartments) used to advertise itself in its postcards as: "Hi-Lo Courts. Modern accommodations, air conditioned, T.V. service, fine restaurant in connection, weekly rates". It was located on the 1950s Route 66, once it had become a four lane highway. As you can see, I-44 simply cut it off, 1.1 miles from the nearest exit. 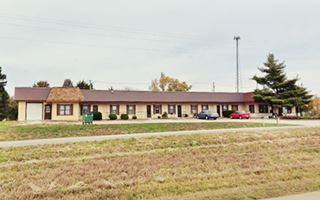 Hi-Lo Motel as it looks today. Click on image for larger view 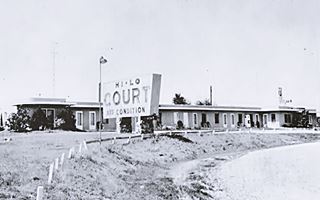 Hi-Lo "Court" in a vintage photo www.motherroadrevisited.com
Click on image for larger view

Turn around, head east, pass the old Sunrise and keep on, 0.9 miles to visit the former Grande Courts:

It began with 40 rooms, as a motor court, with cottages and garages, including a pool and "all-night watchman". Later it was refurbished and became the Hitching Post Motel. Still open, though once again remodeled -the pool however still occupies its central position- it is the Family Motor Inn.

You can Book a Room in the Family Inn Motel

Turn back and head west again, to visit the Shamrock Motel:

On the service road. This was the original alignment of Route 66 and F. E Dobbs opened the motel in 1945, just at the end of WWII. It was built by a local stonemason in hand-cut Ozark sandstone. It was a Motel and Restaurant. Now it is closed. It is See its photo above at the top of this page.

Head to west towards Bourbon and see a small Family cemetery:

Walled in, to your right, sandwiched between Route 66 and I-44, it is a family burial plot. See its Street View

Visit neighboring Stanton to the east or Bourbon to the west.

Book your
Hotels in town

Less than four miles east of Sullivan via Missouri Highway 185.

Created in 1926 it protects over 40 caves and a forested landscape. Don't miss Fisher Cave with massive columns and bear claw marks from the past. Rafts and canoes can be rented to have fun on Meramec River. Or fish, trek along its 13 miles of hiking trails or swim. The park has RV campsites, cabins and hotel

Read more at the Park's Website (there is an RV campsite there too).

Deer and buffalo opened the first trail here, which was used thousands of years later by the Illinois and Osage Indians. The French and English explorers followed it into the Ozarks, and it became the main road from St. Louis to Springfield. In the 1850s it serviced the military telegraph line from St. Louis to Fort Smith, Arkansas and was named the "The Wire Road". However it was a very bad road and when cars became more common in the Ozarks in the 1910s, it had to be improved. The state upgraded it as Missouri State Highway 14 from Saint Louis to Springfield in the 1920s, and built bridges (like the 1922 Route 66 Bridge just east of town). Route 66 was aligned along MO-14 in 1926 and it ran through the town. At that time it had a paved "Concrete or high type surface" between Bourbon and Stanton and was being paved from Stanton to Gray Summit

From Sullivan to Bourbon

It is a short drive from Sullivan to Bourbon along Old Route 66 (which runs along the south side of I-44), this is shown in Pale Blue in the Map above, but some sections of the old road were overlaid with the four-lane alignment of Route 66 in the 1950s and now lie under the freeway (I-44), these sections are shown in Black in the map: East of Bourbon (according to USGS 1969 Map), the old 1926 US66 roadbed is under I-44 after passing Hill Cemetery and ony reappears at Buttler Pond Rd. (west of MO-FF). continuing as S. Service Road until Landers Rd, where it is lost once again under I-44 until reaching Sullivan's western tip, where it appears as Historic US 66 next to the Shamrock Motel, on the eastern side of the freeway.

By the late 1940s Route 66 became too congested and this led to its improvement. In 1953 the original road was bypassed by a divided dual carriageway highway which remained as US 66 until the late 1950s when it was also numbered as I-44. As mentioned above the new roadbed covered some sections of the 1926-53 alignment of Route 66. A state petition in 1962 to name the highway I-66 instead of I-44 was denied by the AASHTO as that number had been used already in the east.

Beginning in 1967 the old four lane US-66 ⁄ I-44 Freeway was improved again in Missouri and the old US 66 was upgraded to Interstate standards.

Finally in 1972 the whole of Route 66 had been replaced by the Interstate system and in 1974 it was decided that the whole of US 66 from Chicago to Joplin would be eliminated and decertified. However this was delayed until I-55 in Illinois was completely brought up to Interstate standards. The signs were removed in 1977 but even then, the last segment of the old Route 66 in Missouri was bypassed in 1981.

> > See the next segment Bourbon to Hofflins (west)