Hofflins is a small ghost town on the old (1926-54) alignment of Route 66, just a few scattered homes where once stood a General Store.

Hofflins is an unincorporated comunity on Route 66 in Crawford County, in the central Missouri Ozarks foothills. (Map of Hofflins).

Looking down Route 66 in Hofflins, Missouri

Check our Cuba - history post for information on the general history of this region.

The Frisco Railroad completed is line through the area around 1858 and shortly after, Walter L. Hofflin bought a large piece of forested land to extract timber and shipp it out by rail. The cleared property became his farm. He had the railroad build a stop and it was named "Hofflin". The post office opened in 1903, and he was the postmaster and also owned the local General Store.

The post office was named after the railway station, which was named after Mr. Hofflin, the first settler. However the USGS maps of 1948 (see below) added a final "s" to the name, which became "Hofflins". The surname has the root "Hoff" and a diminutive suffix "-lin" as found in Zimmerlin or Oberlin and so on, which is from the lower Alemannic region (Switzerland, Alsace and Southern Baden) Hoff derives from the Old German word "hof": court, farm, settlement.

He sold the land and store to Moses Kaluber, who ran it until 1920, selling the property, which was then subdivided. The old General Store was operated by the McWilliams and later by the Libharts, who were also postmasters until the post office closed for good in 1943.

From 1926 to 1954, Route 66 went through Hofflins, and the General Store provided some services tot those driving along it. But it was too close to Cuba to have any motels or gas stations. In 1954 the Old Route 66 became the eastbound lanes until 1968 when the four-lane divided section was built from Hofflins to Fanning permanently bypassing the village, which died.

Where to Lodge in Hofflins, Missouri

Accommodation and hotels close to Hofflins

> > Book your hotel in neighboring Cuba

More Lodging near Hofflins along Route 66

>> Check out the RV campgrounds in neighboring Cuba

Weather widget for Cuba the nearest town to Hofflins

Hofflins has well marked seasons, which are the combination of humid continental and humid subtropical climates.

Hofflins is located in Missouri's "Tornado Alley" and Crawford County is struck by 7 tornados every year.

You can reach Hofflins along historic Route 66 and Interstate I-44 that links it with Oklahoma City, Springfield and Tulsa in the west and with Sullivan, Eureka and St. Louis in the east. U.S. 63 runs through Rolla to the west and US 50 passes through Villa Ridge to the east.

Map of Route 66 through Hofflins Missouri

Route 66's alignment in Missouri: the Historic Route 66 through Hofflins

Hofflins and its Route 66 attractions

Book your
Hotels nearby

Hofflins, is a small old ghost town on Route 66 that once had a General Store.

"Missouri, a guide to the "Show Me" state" a guide published by the WPA in 1941 does not mention it, but the book published in 1946 by Jack DeVere Rittenhouse ("A Guide Book to Highway 66") does mention it: "HOFFLINS (Pop. 48) is truly a small town; one store and one home, but it has a post office". It was tiny even then.

As you drive east from Cuba along Historic Route 66, when you reach Exit 210 of I-44, you have reached Hofflins. The road that crosses I-44 to the north (Hwy. UU) was part of the old village. Here US 66 curved following the railroad while the later alignment (built in 1954), now under the freeway keeps straight east. Not much to see, enjoy the road and imagine it during its heyday, with a steady flow of cars and trucks.

Head west and visit Cuba, the mural city or east into Bourbon. 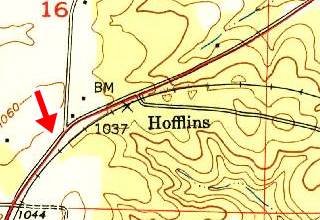 The first "trail" in this region was created by buffalo and deer, and much later the Illinois and Osage Indians used it. After 1680, French and English trappers and explorers trekked it into the Ozarks. It became the main road from St. Louis to Springfield and in the 1850s it serviced the military telegraph line from St. Louis to Fort Smith, being known as "The Wire Road".

By the early 1910s, cars had were popular in the Ozarks and the road was improved thanks becoming Missouri State Highway 14 from Saint Louis to Springfield.

In 1926 Route 66 was aligned along MO-14 through Hofflins's and at that time it had a graded earth roadbed. It was paved by 1931 and this original road is runs on the south side of I-44 and it is shown in Pale Blue in the Map above. 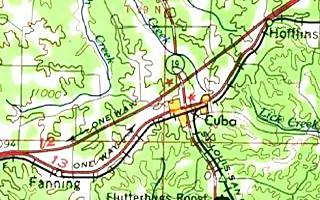 USGS map of Fanning to Hofflins through Cuba 1966, Route 66 is shown in Red.

Starting in 1953 Route 66 became too congested in neighboring Cuba. So it was upgraded to a four-lane highway in which the original 1926 Route 66 alignment through Hofflins became the two eastbound lanes of the new "super highway" from Fanning to Hofflins. Two new lanes were built (shown in Blue in the map above) from what is now Exit 203 to Exit 210 at Hofflins to carry the westbound traffic. East of Hofflins the new four way freeway was completed in 1954 as dual divided highway all the way to St. Louis, cutting some segments of the old alignment shown in Black in the map above.

Beginning in 1967 the old four lane US-66 ⁄ I-44 Freeway was improved again in Missouri and village of Hofflins was bypassed: two new eastbound lanes added next to the westbound ones, forming a four-lane dual highway that replaced and bypassed the old alignment through Hofflins. This can be seen in the 1966 USGS map of that area.

Eventually the whole of US 66 in this area was upgraded into a four lane divided highway with overpasses and it coexisted with the new interstate I-44. A state petition in 1962 to name the highway I-66 was denied by the AASHTO as that number had been used already.

Finally in 1972 the whole of Route 66 had been replaced by the Interstate system and in 1974 it was decided that the whole of US 66 from Chicago to Joplin would be eliminated and decertified. However this was delayed until I-55 in Illinois was completely brought up to Interstate standards. The signs were removed in 1977 but even then, the last segment of the old Route 66 was bypassed in 1981.

> > See the next segment Cuba to Fanning (west)