Truxton is a very small village in western-central Mohave County, in the northwestern part of Arizona. (Map of Truxton).

The Frontier Motel and Café 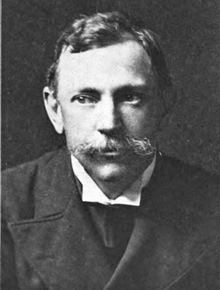 For the older history of this area, check our Peach Springs page, which tells about the Hualapai natives and the Spanish-Mexican period.

After Mexico ceded the territory to the U.S., the government sent Captain Lorenzo Sitgreaves (1810 - 1888) in 1851 to lead an expedition through New Mexico and Arizona to survey the Zuni and Colorado Rivers. He went through what is now Truxton and camped there, writing in his diary: "This rivulet which I have called the Yampai has its source in three small springs...".

In 1857 the U.S. government commissioned Lt. Edward "Ned" Fitzgerald Beale (1822-1893) to survey and open a wagon trail from Ft. Smith (Arkansas) to California.

He used camels, imported from Tunis as pack animals in his expedition. Though hardier than mules, the camels scared both horses and mules. The Army decided not to use camels in the future.

Beale followed Sitgreaves trail, passing through the same springs which he named "Truxtun", after his son.

After the Hualapai were placed in their reservation, the Atlantic & Pacific Railroad (which later became the Atchison Topeka and Santa Fe Railroad) built their railroad through the area. They set up a stop at Truxton, but moved their tracks to higher ground after the floods of 1904.

In the 1910s, the National Old Trails highway was built from California westwards through Truxton and became Route 66's alignment in 1926.

Truxton is set in the place where the wide valley next to Peach Springs merges into a granite gorge (Crozier Canyon); granite which extends northward to the foot of Music Mountain, a high peak which very prominent, some 7 miles to the northwest, the southwestern corner of the Grand Wash Cliffs.

Meaning unknwon. The suffix "trux" is probably some Anglo Saxon family name. The prefix "ton" is Old English "ton", which was a "farm", "settlement", "village".

The name was later deformed -changing the "u" into an "o", and became "Truxton".

Clyde McCune and Donald Dilts opened a service station and garage in Truxton in 1951, and chose a spot close to the head of Crozier Canyon beyond the Hualapai Reservation. He had heard that a dam would be built onthe Colorado River at Bridge Canyon and expected the road that would lead to it to start off from Route 66 at Truxton (See it in the map below).

He named the place Truxton after the railroad siding closest to his establishment.

Others followed him and even though the dam was never built, the place boomed until I-40 bypassed this section of U.S. 66 in 1979. Now only a few businesses cater to the traffic.

Where to Stay near Truxton

Spend a night in Peach Springs, next to Truxton, at its Hotel:

More Lodging Near Truxton along Route 66

Book a hotel nearby, in Kingman

Truxton's weather is dry and sunny. Hot in summer and cold in winter. There are some 280 sunny days every year.

No tornados in Truxton because there are hardly any tornados west of the Rocky Mountains.

You can reach Truxton along Historic Route 66 in Arizona from Seligman (east) or Kingman (west).

Map of Route 66 in Truxton, AZ

Check out Truxton on our Arizona Route 66 Map, with the complete alignment and all the towns along it.

Map with the alignment of Route 66 through Truxton

Route 66's alignment in Arizona: the Historic Route 66 through Truxton

Sights and Attractions in Truxton, Arizona

In Truxton there are several service stations: Bell, Texaco, Chevron and Truxton; a café and three former Route 66 motels: the Frontier, the Barker and the Orlando. As well as the old Cowgill's signpost.

When Jack DeVere Rittenhouse drove down Route 66 in 1946, before writing his classic "A Guide Book to Highway 66" he did not mention Truxton because at that time it had had not yet been established. The oldest service stations and motels in town are from the early 1950s.

Actually there is not much of a "city" to tour in Truxton. You can drive along Route 66 and take in all the sights stopping along the way. Our itinerary starts at the eastern tip of town, at the bridge over the dry creek:

To the right is a service station with a high steel canopy held by four steel posts. By the highway is the signpost lacking the sign, which, from the shape of the post, must have been a Texaco. The building has two bays and seems to be a repair shop, it is known as Sudberry's Southland Service Station.

An old service station on Route 66 in Truxton Arizona

A few yards to the west, next to the service station is a smal building, which apparently was a Chevron Service Station, all that remains of its filling bay is the concrete paving.

To the west of it is a masonry building, housing a café with a gabled roof. It can be seen in the photograph below, behind the signpost.

Head west to corner to see the Barker Apartments:

On the northwest corner is the abandoned building which was built in 1953 and operated for some years as a motel. Later it was purchased by the Barkers (they owned the Frontier Motel across the road) who rented its apartments to the locals.

Unpainted signpost of the Barker Apartments 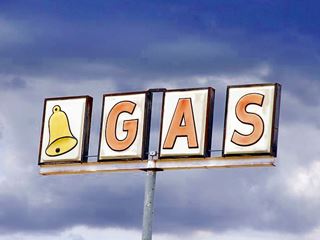 Beside Barker Apartments is another "former" service station, the sign still proclaims "Gas", but the image of a bell which once was the brand is now gone. In the 1990s it sported the sign of a Mobile Gas station.

Cross the road to visit another defunct service station:

The white building lacks the canopy, but the area where the gas pumps once stood can be clearly made out.

This is its Street View.

Next to it, to the west of it, is the famous Frontier Motel:

This is a classic Route 66 motel with flamboyant signage and all. The Frontier was built by Alice Wright in the 1950s, and it included a café and the motel with several units.

In 1957 it was purchased by Ray and Mildred Baker (who would later work actively in the rebirth of Route 66, through the Historic Route 66 Association of Arizona). Ray passed away in 1990 and Mildred in 2012.

An view of the Frontier motel and Cafe,Route 66 in Truxton Arizona

Cross back to the north side of the road and visit the Truxton Service Station:

This service station opened in 1951 and at one time was a Withing Brothers gas station, and was also owned by Mildred Barker (owner of the Barker Apts. and the Frontier motel & café).

Head west for 0.2 miles and, also on the right side of the road is an abandoned motel, the Orlando Motel.

This is another classic, date unknown, but you can see it in the following set of "Then and Now" photos:

A Photo showing a snowed Orlando Motel in Truxton

There is more greenery around the building, it has lost its canopy and although the sign is the original one, it lost its upper "spikes".

The same spot,with the remains of the Orlando Motel on Route 66 today

Keep westwards to the modern (it opened in 2006) former Cowgill's Trading Post, now a Gas & Grub. It was the site of a famous "Cowgill's" sign post, now rather faded, and having lost some charm.

Compare the photo with its Street view.

At one time there was a mural with a Native face on the western facade of the building. Now gone.

The Alignment of Old Route 66 in Truxton

Two miles (2 mi.) west of Peach Springs the pre-1950s US 66 roadbed can be seen as it splits towards the north side of the current alignment and then curves, crossing it, and passing towards the south of it, running more or less parallel to it.

This old alignment cannot be driven nowadays but you could walk it (be careful of trespassing private property). It passes behind the Indian High School and meets the current alignment (1950s- 1979) close to the western boundary of the Indian Reservation. You can see it in the map above, in Blue and in this street view.

The road then enters Truxton and continues with only one alignment up to Crozier Canyon.

The map below from 1951 does not show Truxton, which was established that same year. Instead it has Crozier and Valentine.

Note to the north, on the Colorado River, the "Bridge Canyon Dam Site" and the road linking it to the spot where Truxton was founded.

What are now known as "Grand Canyon Caverns" appear as "Coconino Caverns".

There are plenty of outdoor spots where you can enjoy nature close to Truxton, from neighboring Peach Springs you can visit the Grand Canyon and go rafting along the Colorado River at Diamond Creek or enjoy the Grand Canyon Caverns along Route 66.

You can also drive up to the Grand Canyon, from Williams.

Special thanks to www.66postcards.com used under Fair Use.