Antares is best known for the classic 1965 Ranchero Motel and the gigantic tiki head known as Giganticus Headicus.

Antares is a tiny village in central Mohave County, on Route 66 in the northwestern region of Arizona, just north of Kingma. (Map of Antares).

Check the History of Kingman, for full details on the region's history.

Antares is the name of a gigantic red star in the constellation of Scorpio. It resembles Mars hence its Greek name, which means "the rival of Mars". But not because it competes in brightness, but because of their similar red color.

When the the Atlantic & Pacific Railroad (later the Atchison Topeka and Santa Fe Railroad laid its tracks through the area in 1883 they came across an obstacle: the Peackock Mountains just South of Hackberry.

They opted to route the tracks along the longer but easier alignment with a comfortable gradient that ran along the oriental foothills of the mountain range, with a nortwestern course through Hackberry.

Six miles north of Hackberry the mountains were much lower (mere hills) so the tracks took a wide seeeping 90°deg; curve, crossing the range and taking a straight course towards the southwest, all the way into Kingman.

It was, on this curve that a siding was built. It was named Antares.

The National Old Trails highway (N.O.T.) was built in the 1910s and it followed the railroad. Route 66 was built along that same alignment in 1926.

Where to Stay near Antares

>> Book your Hotel in neighboring Kingman

More Lodging Near Antares along Route 66

Motels and Hotels in ...

Find a room nearby, in Kingman:

Antares has a "cold semi-arid climate".

As the Antares is located to the west of the Rocky Montains there are virtually no tornados in this area.

You can reach Antares along Historic Route 66 in Arizona from Selimgan (east) or Kingman (west) and reach any of those towns via I-40 or from Las Vegas, Nevada, by US 93

Map of Route 66 through Antares Arizona

Check out Antares on our Arizona Route 66 Map, with the complete alignment and all the towns along it.

Route 66's alignment in Arizona: the Historic Route 66 through Antares

Landmarks and stuff to see

The main attraction in Antares is a 1960s motel, the Ranchero Motel with a gigantic "Moai" or "Tiki" head, the Giganticus Headicus.

Author Jack DeVere Rittenhouse wrote a great reference book for Route 66 fans, his 1946 "A Guide Book to Highway 66". It provides plenty of information about the Mother Road during its heyday period.

However Rittenhouse does not mention Antares. In his days it was merely a railroad siding and there was nothing there but the open Hualapai Valley after the route curved across the foothills of Peacock Mountains.

The Ranchero Motel opened in 1965. It is located beside the westbound lane of Route 66, on the Antares "curve".

Next to the old motel is Antares Road, a county road, begins at Route 66 and runs to the north northwest ending at Pierce Ferry Road, access to Meadview and the Colorado River at Lake Mead.

The motel's main feature was a steep gabled roof and a sign with triangular shaped parts.

As you can see in the thumbnail, at one time it sported advertising on its roof: "Lake Mead Rancheros" (yes with an "s" at the end) followed by "Restaurant Bar Motel" and there was a Shell service station with the pumps under a now vanished canopy. 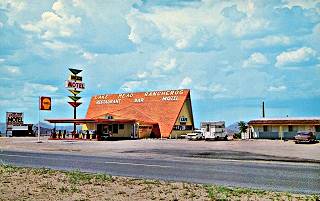 The place was also the Kozy Corner Trailer Court, with the Kozy-mart convenience store that incluede a Laundr-O-Mat.

Now, long after it closed, it has a kitschy Route 66 attraction, a gigantic Tiki head, the Giganticus Headicus. 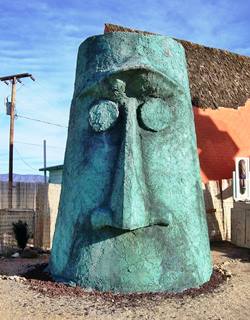 The Giant Moai (Giganticus Headicus) in, Antares, Arizona
By Mlhradio

Located on the west side of the former motel's entrance, it is the kind of landmark that at one time was characteristic of Route 66, a big, odd statue which is on par with other similar Americana like the Blue Whale (Catoosa, Oklahoma) or The World's Largest Totem Pole (Foyil, Oklahoma) or the Granny's Closet - Lumberjack (Flagstaff, Arizona), just to mention a few.

But this is no "classic" landmark, as it is relatively new, it was created in 2004.

Gregg Arnold, the creator of the Giganticus Headicus, moved west to Kingman from the East Coast in 2003 and settled on a 3-acre piece of land at the corner of Antares Road and Route 66. It is here that Gregg created is work of art, "Giganticus Headicus" (also known as "GH").

It is often described as a gigantic Tiki head (hence its latinized toung-in-cheek name).

The massive object is large: it is 14 feet high (4.27 m). It's painted green and was built with wood and plastered with stucco to give it a stone-like surface.

GH was chosen as one of the top 60 things to see while traveling across the U.S. in Nabisco's Cheez-It "Real American Road Trip" campaign of 2012.

GH has appeared on several magazines and media publications over the years, featuring Route 66.

Read more about Gregg's Art www.antaresartgallery.com, located on the site of the former motel. By clicking you will leave our Website. Come back soon! 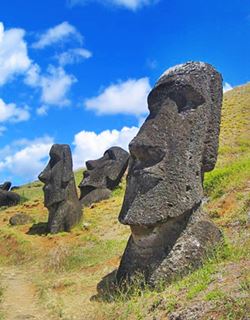 A Moai in Easter Island, Credits

Tiki is a Maori (the New Zealand natives) myth. He was the first man who, with Marikoriko, the first woman, fathered mankind. The word tiki is applied to stone or wood carvings depicting him.

Moai, on the other hand are the gigantic human figures carved in stone on Easter Island (Rapa Nui) and, according to legend they were modeled after stone figurines brought to the island by their myghical first chief, Hotu Matu'a.

Tiki's come in a variety of shapes but the word does not exist in Easter Island or Western Polynesia. Moais are not Tikis, and are unique to Easter Island. They were carved out of volcanic rock and erected between 1250 and 1500 AD.

Their main feature are their gigantic heads almost half the size of the body. They represented the living or ancestral chieftains, abodes of their spirits, who guard and oversee the villagers, that is why they face inland.

Comparing both images, we can see that GH is definitively inspired in the Moais, his rugged surface, and heavy brow are moai-like, but the round eyes and the lack of a mouth set him apart from them.

The Alignment of Old Route 66 in Valentine

From Hackberry to Antares and onwards to Kingman

From the General Store at Hackberry, head to the northwest along Route 66, the village of Antares is only 6 mi. away (Map with directions).

In this section, the road adopted the course of the railroad which skirted the Peackock mountains until reaching the Antares siding, where it turned sharply (90°) towards Kingman, running with a straight southwesterly course along the flat Hualapai Valley, with the Peacock and later the Hualapai Mountains to its left.

The 1946 Route 66 guidbook written by Rittenhouse mentions Hackberry but does not mention any other landmarks until reaching Kingman. He only states that the road left Crozier Canyon shortly after leaving Hackberry and ran "amazingly straight" along a "great plain" all the way into Kingman.

An earlier 1910s National Old Trails (N.O.T) map of the region shows Hackberry at the foot of Peacock Peak and to the N.W., the station of Antares but has no references to garages or stores there.

There were four other railroad sidings between Antares and Kingman (but no stores or gas): Hualapai, Sombra, Berry and Louise.

The Arizona DOT map of 1935 marks Hackberry and the paved road runs all the way to Topock, passing through "Hualapai", 12.4 miles west of Hackberry. No mention of Antares.

The N.O.T. and the first alignment of US 66 prior to being realigned in the 1930s, ran on the south side of the tracks west of Hackberry, as shown in this map, meeting the later (1930s-1979) alignment 2 miles northwest of the town.

From here, both alignments coincided as they ran straight towards Antares, curving then towards the southwest.

After Antares, the road runs straight, through Valle Vista (which did not exist during the "classic" days of Route 66) and past the Hualapai and Berry sidings. At Kingman Airport, the westbound lanes of the modern four lane highway are the 1930s-1979 Route 66 roadbed; the eastbound ones were added after 1979.

The road then crosses I-40 entering Kingman.

The map below from 1951 shows this section of Route 66, notice that it does not mention Antares.

Visit our Kingman Outdoors page which has full information on tours to the Grand Canyon Skywalk and also Hualapai Mountain Park.