Adrian has the honor of being the Geo-mathematical Center of Route 66: the original U.S. highway 66 ran 1,139 miles east to Chicago and the same distance west to Los Angeles. This small rural town is the midpoint and halfway point of US Route 66. It also has Three vintage gas stations.

Adrian is located in the southwestern region of Oldham County, in the western Texas Panhandle along the water divide between the Canadian River to the north and the Palo Duro Creek to the south.

The Image above shows the sign of the Midpoint Café on the right side (south) of the image and the midpoint sign, on the left side of the image (north).

The town's name is that of an early farmer who settled in the area, Adrian Cullen. Not much is known about him.

Adrian is a form of Hadrian derived from Hadrianus, which in Latin meant "From Hadria". Hadria was a town in northern Italy which gave its name to the Adriatic Sea.

Adrian was the name of the Roman emperor who built a wall between England and Scotland in the 2nd century AD, and also the name of Adrian IV the only English pope.

The Panhandle region of Texas has been inhabited for over 10,000 years and sophisticated Paleo-Indian stone tools have been unearthed at nearby Clovis, NM.

In the mid 1500s, the Spanish explored the region but left it to the Comanche and Kiowa Indians, who ruled the plains, hunting buffalo until the mid-nineteenth century.

White settlers started to occupy the area after the U.S. incorporated Texas. Settlement led to problems with the Indians and after a war (1874 - 76) they were defeated and sent to reservations.

The town of Tascosa, on the Canadian River became county seat of Oldham County (1880), the railway link finished in 1887 increased the inflow of homesteaders.

The surveyors for the Choctaw, Oklahoma and Texas Railroad (it later became the Chicago Rock Island Railway) studied the area in 1900 and chose this spot for a station. At that time the first settler was a former Texas Ranger, Calvin G. Aten, who lived in a dugout just west of what would become Adrian.

The first train ran through the new station in 1909 and the land was sold by the American-Canadian Land and Townsite Co. to farmers and settlers. The town had a school and post office by 1910 as well as a bank, newspaper (the Adrian Eagle) and several stores.

By 1915 it had added two churches and its population had swelled to 50. In 1926, the brand new U.S highway 66 was routed through Adrian and this brought a flow of travelers.

Wheat farming led to the building of the first grain elevator (1929). It weathered the Great Depression and experienced the boom of the 1940s and 50s in leisure road travel.

Adrian incorporated in 1953. I-40 drew some trade away from the main street and population which peaked at 222 in 1984 has dropped slightly.

Where to Stay in Adrian

The closest town with hotels is Vega: Motels and Hotels in Vega.

Alternatively you can lodge in the next big town in Texas, Amarillo: Hotels and Motels in Amarillo

> > Book your Hotel in Amarillo or Vega

What is the Weather in Adrian?

Snow can fall in Adrian between September and May (first snow is usually on the first week of December). The high altitude causes greater snowfall than locations further east: 17” per year on average (with peaks of about 40”) - 43 to 102 cm. The region around Adrian is among the windiest in the U.S.

Tornadoes, Adrian is located in the "Tornado Alley". Read more: Tornadoes on Route 66.

Adrian is the fourth town to the west of Amarillo (50 mi away) along I-40.

Heading west from Adrian, it is 24 miles (39 km) to the New Mexico state line.

Map of Route 66 through Adrian

Click on the link below to zoom into the map:

Color Key to the Map of Route 66 in Adrian.

Map with the alignment of Route 66 through Adrian

Route 66's alignment in Texas: the Historic Route 66 through Adrian

Below you will find full details on Old Route 66 in Adrian.

This town is the Geo-mathematical Center of Route 66; 1,139 mi separate it from Chicago and Los Angeles along the original U.S. 66. Visit its Midpoint Cafe.

Adrian is quite a small western Texas rural town, its main attractions are along its Main Street, Historic US 66, but first head into town to see a relic from the 1800s:

The Giles Hotel was built by J. P. Collier. It was later owned between 1910 and 1946 by Chafin Glasscock and Stella Hawkins (renamed as Adrian Mercantile) who combined the hotel with a general store and a café It finally became the Adrian Community Center.

The solid building stands to this day, over one century after it was built, on the northwestern corner of W 4th and Walnut Streets, next to the now gone railway station (an excellent location for a hotel).

The windows on the ground floor are the same, those of the top floor have gone, together with the balconies. But the building is recognizable. 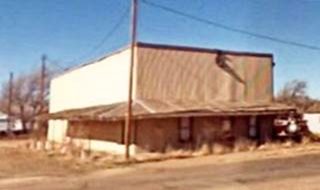 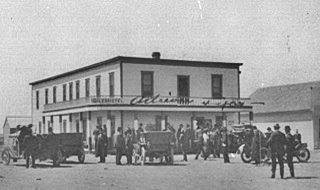 Head back to Route 66 and go west:

Just before Grand Ave. are two gas stations, one is in an Art Deco style as you can see in the parapet. The other has been restored:

Passing Grand Ave. to your left (South) is an old gas station with a flat roofed canopy and a single bay garage:

Just west, also to your right is the famous Cafe, and sign:

When you're here, you're halfway there

This cafe bears the record of being the oldest continuously-operating cafe along U.S. Highway 66 between Amarillo, TX and Tucumcari, NM, as well as being the midpoint between Los Angeles and Chicago.

In 1928, two years after the creation of U.S. 66, a very simple brick building went up in Adrian to cater for the travelers: a one-room construction with a compacted earth floor which was known as "Zella's", after Zella Prin, who leased it from its owner, Jeannie VanderWort.

It was enlarged in 1947, a period when it was open 24⁄7. And was finally bought by Jesse Fincher and Dub Edmunds in 1956 who renamed the place "Jesse's Cafe" and ran it for 20 years together with a service station that was next to it.

Business turned sour in 1969 when I-40 bypassed Adrian and travelers stopped passing through the town; this led to the sale of the Cafe.

Terry and Peggy Creitz acquired it and changed its name to "Peggy's Café". After another change of ownership (when it was renamed again, as "Rachel's"), it was sold to Fran Houser in 1990.

Houser called it the "Adrian Café" and ran it until 2012 when she retired; in 1995 she renamed it "Midpoint Café" to ratify its unique location on the halfway point of US 66./p>

Pixar was inspired by the Midpoint Cafe to create Flo's V8 Café in the animated film Cars (2006).

The characters Flo, Mia and Tia were based on Fran Houser and two of her restaurant's employees, the sisters Christina and Mary Lou Mendez.

The movie's credits acknowledges the café and Fran Houser.

The neighboring former gasoline station is now the Sunflower Station, an antique and souvenir shop

Capt. Randolph Marcy followed a similar route in 1849 escorting a group of 500 pioneers heading for California. Marcy proposed that the transcontinental railroad be built along this trail. It would take another 50 years before the trains rolled west across Oldham County. US 66 and I-40 were laid very close to the Trail.

It was a shipping point for the ranchers in this area, midway between Glenrio and Adrian. It had a depot which remained open until the Rock Island railway abandoned the line in the 1980s. Today there is a ranch there. The tracks have been lifted but some old railway bridges can be seen.

From Amarillo to Glenrio, TX

Leave central Amarillo, (mile zero) on Amarillo Blvd. and Pierce St. (US 87) take a left, bridge over railroad and (1 mi.) take a right onto SE 6th Ave. (TX-279) Go straight, it becomes SW 6th Ave., underpass (2.3 mi.) and change of course of 6th Ave. (2.9 mi.) then keep west, through the Historic Sixth Street District. Take a left onto Bushland Ave (3.8 miles), which runs towards the SW, passes the Golf Course and passes under Bell St. (5 miles). After the Underpass, take a left onto W. Amarillo Blvd. (I-40 Buss), and pass the Veteran's Hospital.

The road curves softly until crossing Coulter Street (5.8 mi.), taking a westward direction. After crossing TX-335 (7.5 mi.) it reaches Soucy, passes in front of the Historic Helium Plant (8.5 miles) and before reaching the curve under the old railway line, the old alignment takes a right (9 miles) onto Indian Hill Rd.

From Adrian to Glenrio

Route 66 carries on, all the way to the New Mexico state line: leave Adrian and you will see, at Exit 18, Co. Rd. 18 Gruhlkey (54.7 miles). Keep west on the Service Road which ends and takes a right, northwards This is the old alignment of US hwy 66, which followed the now abandoned Rock Island Railway. It curves north and then again south, meeting I-40 at Exit 15 (57.4 mi.). Before I-40 was built, the road headed south, following the railway tracks, and then turned to the west.

At this point you must get on I-40 westwards. The old alignment meets I-40 (67.2 mi.); to the south of the Interstate you will see the old road next to the now lifted railway tracks.

After the overpass you will meet ("T" crossing) US 66 running east - west. Take a right and reach Glenrio (73.1) at the Texas - New Mexico State Line.