Vega is a small rural town located on the original alignment of Route 66. It has many landmarks: Roark Hardware (oldest operating hardware store on Route 66), Dot's Mini Museum, the Magnolia Service Station, Roosters Mexican Restaurant (Originally a station), the 1960's Hickory Inn Cafe, Bonanza Motel (1950's), the Sands Motel and the historic Vega Motel which is an original tourist court built in 1944 and entered in the National Registry of Historic Places

Vega is located in the south of Oldham County, and is the County seat. It is set in the western region of the Texas Panhandle on the water divide between the Canadian River to the north and the Palo Duro Creek to the south.

Human beings have inhabited the Panhandle for a long time; remains of Paleo-Indian stone tools 10,000 years old have been recovered at nearby Clovis in New Mexico.

Book your Hotel in Vega

Shortly after the conquest of Mexico, the Spanish Conquistadors roamed the region in 1541 and left it to the Comanche and Kiowa Indians, who ruled the land and hunted buffalo unhindered till the mid-1850s.

White settlers began occupying the region after Texas' independence and incorporation to the United States. This led to problems with the natives and after a war (1874 - 76) they were defeated and enclosed in reservations.

Tascosa, on the Canadian River became county seat of Oldham County (1880) and was linked by rail with Fort Worth and Denver in 1887.

N. J. Whitfield purchased the land that would become Vega in 1899. Besides selling land to other homesteaders he also sold a strip of land, in 1903, to the Choctaw, Oklahoma and Texas Railroad (it later became the Chicago Rock Island Railway) as right of way for their tracks. The town was surveyed that same year by Miller and Trigg; Miller opened quickly opened the town's first store. In 1907, the Landergin brothers purchased a ranch in the area and attracted more settlers to the new town (they founded what is now the ghost town of Landergin); they also opened a bank in Vega in 1908.

The railroad was finished in 1909 bringing prosperity and more business. It soon overshadowed the county seat of Tascosa and became the new seat in 1915.

It was incorporated in 1927 and faced a fire which burned several buildings down in 1931. This led to the organization of a city-wide water system.

U.S. highway 66 was created in 1926 and passed through Vega, bringing visitors and more business to town: motels, food outlets and gas stations sprouted and many still survive to this day as memories of bygone days.

It is known as «The Solar Capital of Texas» because it is the 7th Sunniest place in the U.S.

Vega is referred to as the "Crossroads of the Nation", due to its significance on U.S. Highway 66.

The historic and classic Vega Motel, a vintage lodging on Route 66.

Where to Stay in Vega

Vega has various Motels and Hotels.

Alternatively you can lodge in the next big town in Texas, Amarillo: Hotels and Motels in Amarillo

>> Book your Hotels in Vega

Book your hotel in Vega

What is the Weather in Vega?

The region surrounding Vega is dry, windy and very sunny: rainfall averages about 20 in. per year (500 mm).

It snows in winter around Vega, on average, after the first week of December, but you can expect snow at any time after mid September until mid May. Some 20 inches of snow (50 cm) fall each year, reaching 40” (1 meter) on exceptional winters.

The region around Vega is also is among the windiest in the U.S.

Tornadoes, Vega is on the western tip of Tornado Alley; read more: Tornadoes on Route 66.

Check out Vega on our Route 66 Map of Texas, with the complete alignment and all the towns along it.

Map with the alignment of Route 66 through Vega

Route 66's alignment in Texas: the Historic Route 66 through Vega

Below you will find full details on Old Route 66 in Vega.

Vega, Around the Town

Vega offers a touch of bygone days, a small rural with the easygoing ways of Northern Texas. Explore the landmarks of the 1920s- 1940s, when U.S. Route 66 was the busiest street in town.

Start at the corner of Main St. and Coke St., in the center of Vega:

The original Oldham County seat was located in Tascosa since 1880, but as Vega grew in importance, Tascosa declined. In 1915 after a special election, the local citizens chose Vega as the new County seat. The courthouse was planned and construction began immediately, it was designed by architect O.G. Rouquemore in Classical Revival style.

The original hip-roof was removed in the late 1960s.

The second service station to be built in Vega was the Magnolia Service Station, in 1924. It had two stories, and the operator lived on the upper floor. The ground floor hosted a barber shop.

In the 1970s, after serving gasoline for decades, when I-40 bypassed the town, the service station closed. Recovery and restoration began in 2001 when the City of Vega applied to the National Park Service Route 66 Corridor Preservation Program for a cost- share grant.

The rehabilitated building was dedicated in 2004 and is now a visitor center and displays photographs and vintage artifacts for visitors to enjoy.

Drive south along Main St., and just after crossing Coke St. you will see the brick building on the right side of the road. It is the oldest hardware store on US Route 66, and it still in operation.

It began as the Vega Court (not motel) when it was built by Ervin Pancoast in 1947. Those were the boom days of Route 66: the U.S. economy was booming, people were relaxed and enjoying their free time and prosperity after the grim days of the Great Depression and World War II.

It was built with two wings, one on the west, the other on the south. It had 12 units. The office and living quarters were located in a small house in the central courtyard.

Pancoast married in 1948 and lived on the premises, operating his motel.

The "U" shaped court was finished when the east wing was added in 1953. The motel now had 20 units, of which 8 had built-in garages as well as bathrooms (some even had kitchenettes).

Business was good and in 1964 the motel was revamped with Perma-Stone.

But changes were brewing: air travel and the Interstate highway system (I-40 in Vega was finished in the early 1970s) which bypassed the small towns led to a drop in road travel. The Pancoast sold the motel in 1976.

Vintage postcard of the Vega Motel

It is a rare instance of a surviving motel, in pristine conditions, an example of the old motor court days of US 66.

It was listed in the National Register of Historic Places in 2006.

The first accommodations along America's highways were rather rudimentary: the auto camp and the tourist home. The auto camp was an area with roped off spaces for overnight camping. Fuel, water, showers and toilets were provided by the Camp supervisors.

They were replaced by the tourist homes, which offered indoor lodging, convenient when the weather was nasty.

The homes evolved into the cabin camp or cottages, which were huts or cabins with basic services.

World War II and its rationing led to more practical building systems and this to the motor courts or motels, where the cabins were unified under a single roof, with shared walls and simpler drainage, power and water systems.

Many motor courts offered souvenir shops, swimming pools, air conditioning and even adjoining diners. By 1948, there were 30,000 motor courts along American highways.

This motel is another classic motel of the 1950s, with the typical layout found in most US 66 motels. 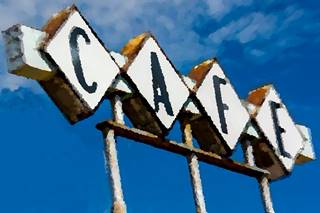 Don't miss the Roosters Mexican Restaurant which was, at one time a Service Station or the Library, which was built in 1911 as a silent movie theatre. The Hickory Inn Café is a 1960s family run concern. The Oldham County Heritage Farm & Ranch Heritage Museum (on Old Route 66 - Vega Blvd.) displays antique farm equipment.

It is off the beaten track yet listed as a Route 66 Roadside Attraction. It was ran by the late Dot Levitt. She came to Vega in the 1940s with her husband Harold and they ran a store (Vega Zero Lockers) which offered freezing storage for the locals.

Her "Museum" exhibits plenty of memorabilia she collected during her long life in Texas, spanning cowboy articles, an Avon perfume bottle collection and Route 66 items.

Located on Route 66 just 0.6 mi. west of Main Street, its postcard tells us: "Air Conditioned... Central Heating... Excellent Restaurant Adjoining... Member Diners Club". It is still open and operating as a motel, but the old Sands Motel is now the Americas Best Value Inn and Suites. Below is a "Then and Now" sequence. The basic "U-shaped" layout has not changed, it has kept its gabled roofs, but its lovely 60's neon sign has gone: 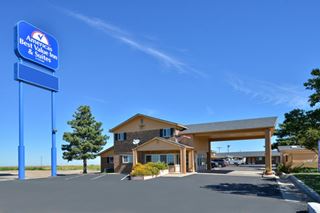 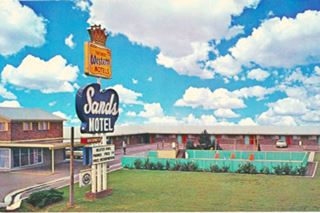 This ghost town was founded in 1908 by the T. Carrabine & Co., on the Chicago and Rock Island Railway. It had a post office, hotel, some homes and a general store. But it lacked a good source of water and this doomed the town: residents and business moved to neighboring Vega. The hotel burned down and the post office closed in 1912.

The foundations can still be seen.

From Amarillo to Vega

Leave the downtown Amarillo area (mile zero) on Amarillo Blvd. and Pierce St. by taking a left turn. After crossing the bridge over the railway tracks, take a right and head west along SE 6th Ave.

At Coulter St. (5.8 mi.) the road changes its southwesterly course for a westerly direction, crosses TX 335 (7.5 mi) and passes through the town of Soucy.

In the 1920s and early 1930s Route 66 entered Vega along a different alignment than it did later:

From the North frontage road by I-40's Exit 37, it did not take a NW tack, instead it kept on straight west, and when it reached Vega, it became Culberson St. At S. Main St, it took a right (along US 385) and went due north till it reached the downtown area by the Courthouse, passing in front of the Magnolia Service Station. At W. Main St. it took a left and continued westwards beyond the current end of West Main St., entering the plains and running with an alignment that is parallel to I-40s North frontage road, but about 100 yards to its right, all the way to Adrian.

Route 66 was realigned in 1937 to follow its current course along Vega Blvd.

The road continues west of Vega and reaches Glenrio on the New Mexico state line. You can see the full detailed itinerary to Glenrio here: Amarillo to Glenrio. Along the way, Route 66 passes through the town of Adrian.