Spencer is a very small community, on the original 1926 roadbed of U.S. 66, its best known attraction is the complex comprising the 1930s Spencer Store, Spencer Cafe & Barbershop and Spencer Garage and Service Station (Phillips 66 gas). It also has the remains of Camp Lookout, a 1930s motor court.

Spencer is a small village on Old Route 66 in Lawrence County, in southwestern Missouri. (Map of Spencer).

Learn more about the history of Spencer in our Carthage Missouri page.

The county created in 1845 and was named after James Lawrence a naval officer from the English-American War of 1812.

An 1870s map of Lawrence County shows Spencer located to the south east of "Heaton" (now Heatonville) south of the western Turnback Creek, that was a different location to that of current Spencer.

What is now Spencer appears in that map at a place named "Mills" on the stream, further north. o the east at the junction of all three forks (West, Middle and East) of the Turnback Creek (now Johnson, Goose and Turnback respectively) was "Chalybeate Springs" and next to it, "Paris Spring".

The first flour mill in the area was operated by Oliver Johnson and John Cherry, the "Johnson-Cherry Mill". After they closed it, Johnson moved one mile downstream and set up his own mill on the creek (now named after him): Johnson's Mill. Others soon moved in as it was on the Carthage - Springfield road, and the post office opened in 1868 under the name of "Spencer", it closed in 1907.

It was named after Spencer, a local merchant whose store was known as "Spencer". Prior to that the place was known as Johnson's Mill.

The name Spencer comes from Middle English "spens(e) or spence" the larder, and the suffix "-er" maxes it a "butler" or "steward".

By the 1910s, the road was in bad shape and the population dwindled. But the Ozark Trails first, and Route 66 -created in 1926- brought life back to the settlement. Soon the locals catered to travellers. This lasted until 1961 when the old US 66 was realigned through Spencer bypassing it. Then, the whole of Route 66 was bypassed by I-44, which had opened in 1958 between Joplin and Oklahoma City, and then went east along what used to be US-166, south of Spencer towards Springfield.

Where to Lodge in Spencer, Missouri

More Lodging near Spencer along Route 66

Motels and Hotels close to Spencer

Book your hotel nearby, in Carthage

Weather widget for Halltown, the town nearest Spencer, to the east

Spencer is located within the "Tornado Alley"; Lawrence County has about of 8 tornado strikes per year.

You can reach Spencer along historic Route 66 and Interstate I-44 that links it with Tulsa and Oklahoma City in the west and with Springfield and St. Louis in the east. U.S. Route 71 (overlapping I-49) links it with Fort Smith, Arkansas and Kansas City.

Map of Route 66 through Spencer Missouri

See the alignment of US 66 in Spencer, on our Missouri Route 66 Map, it has the complete alignment across the state with all the towns along it.

Below is the color key for Route 66’s alignment in Spencer:

Route 66's alignment in Missouri: the Historic Route 66 through Spencer

Spencer and its Route 66 attractions

Spencer is known for the classic 1930 Spencer Store, Spencer Garage and Service Station and Spencer Cafe & Barbershop. Across the road is what used to be a motel: Camp Lookout on the original Route 66 roadbed.

In his 1946 book "A Guide Book to Highway 66" Jack DeVere Rittenhouse gives us a clear picture of Route 66 was like during that time.

Tour the route 66 landmarks in Spencer

The concrete roadbed of US 66 which passes through Spencer is one of the few remaining segments of "original highway surface" on Route 66.

This is the westernmost building of the compound. It was built around 1930 in brick, with a rectangular plan and a flat roof. It served as a grocery store ran by S.L Casey. He built it to replace the old one, which had shut down in the mid 1910s.

Contiguous to the old store is the middle building of the complex. Also built ca. 1930, it has a main entrance door flanked by two windows. It has stuccoed walls.

It served as a café and barber shp, and was not ran by the Caseys, instead at one time Arthur Martin was the barber.

This was the largest building, located at the eastern tip of the complex. It has three rooms and was built with sandstone rubble. Notice its rounded parapet (which conceals the rounded garage roof) and the double doors.

The gas station was originally a Tydol station. Later is switched over to Phillips 66.

Across the street from the service station, to your left is the hill on which once stood a motor court, with individual cabins, in the wooded area next to Johnson Stream: Camp Lookout. 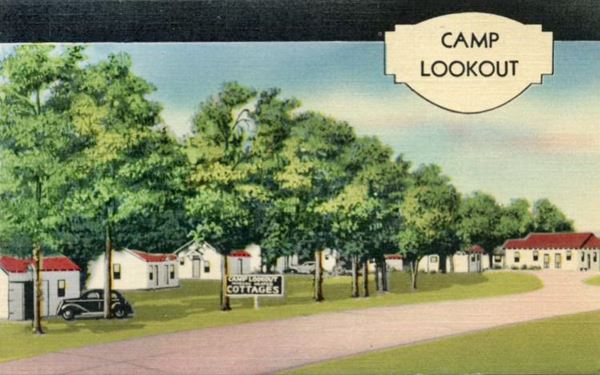 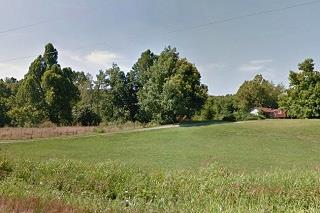 From Halltown to Spencer (and on to Avilla)

Route 66 was created in 1926 and aligned along the Ozark Trail from St. Louis MO to Romeroville NM, passing through Spencer.

Route 66 follows a straight course from Halltown to Avilla, and it has followed it since Route 66 was created back in 1926, which is shown in Pale Blue in the Map above except for one part, between Paris Springs and Spencer, where it followed another alignment from 1926 to 1961: 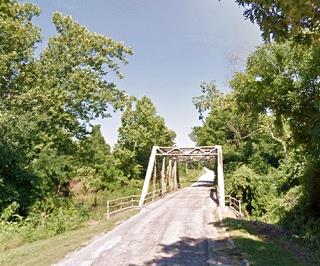 Steel truss bridge at Spencer MO on the 1926 alignment of Route 66. Click image for Street View

The road through Paris Springs and Spencer, which is shown in Black in the map above is the original 1926 alignment and has the original concrete road surface.

After Paris Springs, it crosses the Turnback Creek on a triple pony-struss bridge built in 1923 (See its street view).

Stop at MO-96 and cross it, head south along Co. Rd. N which is the 1926 alignment. When you reach Farm Road 2062 head west (take a right. See thisStreet view with the Route 66 byway sign at the fork). The road heads towards the Johnson Creek narrow steel truss bridge -see picture.

After the bridge, the original road goes through Spencer and just ahead meets the more recent 1961 alignment that bypassed both Spencer and Paris Springs (shown in Blue in the map above).