Arlington has some old stores as its 1926 Route 66 attractions. It is a ghost town on a dead-end, lost in time.

Arlington is an unincorporated community located next to the old US 66 in Phelps County, in the Ozarks in South central Missouri. (Map of Arlington).

For the general history of the area check the History of Rolla, the county seat.

James Harrison settled here in 1818, in what was known as "Little Piney" at the junction of the Little Piney and Gasconade Rivers, which was, for a short while, Crawford County seat. (Arlington, through time, was part of St. Louis, Gasconade, Carwford, Pulaski and finally Phelps County).

When the St. Louis and San Francisco Railroad reached the area in 1867, Thomas Harrison, from Virginia platted the town on his father's land and named it Arlington. The post office which was open from 1868 to 1958 adopted the name.

Named after the plantation belonging to General R. E. Lee in Virginia, confiscated after the Civil War (now seat of the famous National Cemetery next to Washington DC).

The "Wire Road" was built during the 1860s through Arlington, next to the telegraph line that ran from St. Louis to Fort Smith in Arkansas. The 1909 USGS map shows the Wire Road linking it with Rolla along Pea Ridge while another road linked it with Newburg along the Little Piney River valley following the railroad.

Later in the 1920s, the Wire Road was improved and became State Higway No. 14; in 1923 two steel bridges were built on it, one over the railway, the other across the Little Piney River, which runs just south of the town. The state highway became part of U.S. 66 in 1926. By 1946 it had become a ghost town and was bought by R. E. Carney, and later during the 1950s, Route 66 was upgraded to a four-lane freeway and its alignment straightened out, it bypassed the town completely.

Where to Lodge in Arlington, Missouri

Accommodation and hotels near Arlington...

> > Book your hotel nearby, in Rolla

More Lodging near Arlington along Route 66

Motels and Hotels close to Arlington

Book your hotel room nearby, in Rolla

>> Check out the RV campground in neighboring Rolla

Arlington is located in Missouri's "Tornado Alley" and Phelps County is hit by some 8 tornado strikes every year.

You can reach Arlington along historic Route 66 and Interstate I-44 that links it with Springfield, Tulsa and Oklahoma City in the west and with Cuba and St. Louis in the east. US 160, 60 and 65 run to the west, through Springfield, US 63 runs through Rolla, to the east.

Map of Route 66 through Arlington Missouri

See the alignment of US 66 in Arlington, on our Missouri Route 66 Map, it has the complete alignment across the state with all the towns along it.

Route 66's alignment in Missouri: the Historic Route 66 through Arlington

Arlington and its Route 66 attractions

Arlington is a ghost town with some buildings, next to the dead end by the Little Piney River on the 1926 alignment of Route 66

The 1941 book, "Missouri, a guide to the "Show Me" state" published by the WPA tells us that it "... is typical of the hamlets of the region", and Jack DeVere Rittenhouse in his "A Guide Book to Highway 66" published in 1946 says: "ARLINGTON. (Pop 40...; no gas or other facilities.) Arlinton is a small, old-style village whose main street was cut off by a new highway... it nestles on the bank of the Little Piney River" He added that Rowe Carney of Rolla had bought it that same year for ten thousand dollars to turn it into a resort. Which never happened. There was a gas station one mile east of it.

Some Trivia on Arlington

There was a proposal to dam the Gasconade River upstream from Arlington to obtain hydroelectric power and control flooding in the 1930s. But there were no funds for it due to the Great Depression and later due to World War II.

At one time there was a "log corthouse" in Arlinton, it was the first in Phelps County, built in 1812, but now it hs gone. It was 0.3 mi. from town on the South side of the Little Piney River. It belonged to James Harrison, built with logs with mud chinking. Check a Photo of it, you can see the US 66 bridge on the lower right side of the image. The courthouse was here (map).

This blog, tells us that 6 mi. north of Arlington, at Sugar Tree Camp, on top of a cliff overlooking the Gasconade are several stone cairns presumably of prehistoric origin. This is a map showing its location.

In Arlington itself, there are a few buildings, pictured at the top of this page, former stores, and nothing more.

Stop at the old cabins and motel in Newburg when you drive back to Exit 176.

At one time an Indian trail named by explorers and trappers as the "Great Osage Trail" (after the Osage Indians) was the only track in the area. Later a road was built along it to service the military telegraph line in the 1860s, it later became the main road between Springfield and St. Louis.

During the 1910s cars became more common in the Ozarks, but the dirt roads were in terrible conditions. The Inter-Ozarks Highway Association lobbied for better roads and managed to get Missouri State Highway 14 created. It ran from St. Louis, through the outskirts of Jerome all the way to Springfield. It had a steel bridge built in 1923 across the railroad in Arlington and the Little Piney River next to it. In 1926 Route 66 was aligned along it. It was in those days a gravel surfaced road.

From Arlington to Jerome

Arlington is on a dead end of what used to be Route 66's 1926 alignment. When it became a four-lane highway in 1954 it was cut off from the freeway. Now you must drive back from Arlington to Exit 176 on I-44 and then drive west along I-44, getting off at Exit 172 in Jerome, to head westbound along the North Outer Road. This is shown in Red in the Map above

The original of Route 66 alignment is shown in the map, in Pale Blue (the sections marked in Black are those which no longer exist, after the different realignments of the Highway over the years). But originally it was a regular two-lane highway, paved by 1931. 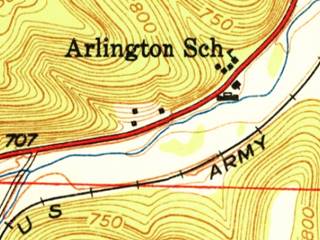 In 1954 a new road, with two lanes was built north from Clementine, through Powellville and Arlington These became the new Eastbound lanes south of the Little Piney River. They crossed it using the 1923 bridge and then continued north through Arlington along the old 1926 alignment into Newburg (the old alignment had become the eastbound lanes. New westbound lanes were built next to the old road and crossed the Little Piney using a brand new bridge. South of Arlington, it linked with the old Route 66, which became the new westbound lanes through Jerome.

See the 1951 USGS map: The new lanes are marked with red arrows and the old road is marked with blue arrows.

Beginning in 1967 the old US-66 ⁄ I-44 Freeway was improved again. The winding westbound lanes (which were the original 1926 Route 66) running through Jerome were inadequate. So, new westbound lanes were built between Newburg and Powellville, through Arlington and Jerome.

The new lanes bypassed the former ones (the old 1926 alignment) which became the frontage road (N. Outer Rd.) in Jerome. The 1923 bridge was replaced by a new one in 1926 and the old eastbound lanes of Route 66 north of Arlington were also replaced by the fomer westbound ones.

Check out our Jerome - Arlington to Newburg Alignments Map from 1926 to 1966.

Eventually the whole of US 66 in this area was upgraded into a four lane highway with overpasses, and after 1958 it coexisted with the new interstate I-44 (a state petition in 1962 to name the highway I-66 was denied by the AASHTO). Finally in 1972 the whole of Route 66 had been replaced by the freeway and in 1974 it was decided that the whole of US 66 from Chicago to Joplin would be eliminated. However this was delayed until I-55 in Illinois was completely brought up to Interstate standards. The signs were removed in 1977 but the last segment of the old Route 66 to be bypassed was the section in Powellville, in 1981.

> > See the next segment Jerome to Powellville (west)