The town of Newburg is not located on Route 66, it is 2.2 miles south of it. Route 66 goes through its distant outskirts. It is located in Phelps County, South central Missouri. (Map of Newburg).

For the general history of the area check the History of Rolla, the county seat.

First settled by William Coppedge in 1823 who manufactured gunpowder using saltpetre from a nearby cave. Capt. C. W. Rogers platted it in 1883, to establish a division point on the St. Louis and San Francisco Railroad.

Originally named Newburgh (with a final "h") by William Painter, it incoporated in 1888. But the post office was named "Newburg" so the town followed suite becoming Newburg. It prospered as an industrial town, servicing the railway's locomotives, and although it closed in the 1940s, it is used by the Burlington Northern Santa Fe Railroad as a maintenance stop.

The "Wire Road" was built during the 1860s to service the telegraph line that ran from St. Louis to Fort Smith in Arkansas, it ran north of Newburg. The 1909 USGS map shows the Wire Road running from Arlington to Rolla along Pea Ridge. There was another road from Newburg to Arlington through the Little Piney River valley next to the railroad.

The road was upgraded to a four-lane highway in the 1950s, and realigned in 1966, to improve it further. Finally in 2003-6 the freeway which had replaced Route 66 was realigned to the west, bypassing Newburg completely.

The Ozark Iron Furnace Stack is a Historic Site, it is all that remains of the iron works that opened in 1867 and went broke in 1877.

Where to Lodge in Newburg, Missouri

Accommodation and hotels near Newburg...

> > Book your hotel in Rolla

More Lodging near Newburg along Route 66

Motels and Hotels close to Newburg

The weather in Newburg has clearly defined seasons and is combines both humid continental and humid subtropical climates. During winter (Jan), the average high is around 39°F (4°C) and the aveage low is a freezing 20°F (-7°C). The summer (Jul) average high is 89°F (32°C) with an average low of 68°F (20°C).

Newburg is located in Missouri's "Tornado Alley" and Phelps County is hit by some 8 tornado strikes every year.

You can reach Newburgalong historic Route 66 and Interstate I-44 that links it with Springfield, Tulsa and Oklahoma City in the west and with Cuba and St. Louis in the east. US 160, 60 and 65 run to the west, through Springfield, US 63 runs nearby, through Rolla, to the east.

Map of Route 66 through Newburg, Missouri

Route 66's alignment in Missouri: the Historic Route 66 through Newburg

The many alignments of Route 66 in Newburg

Newburg and its Route 66 attractions

Route 66 goes by the outskirts of Newburg which was the site of the original Totem Pole Cabins (now gone) and of two classics: Vernelle’s Motel and John’s Modern Cabins

Jack DeVere Rittenhouse in his 1946 "A Guide Book to Highway 66" does not mention Newburg (obviously, as it was not located on the highway), instead he mentions that 5 mi. west of Doolittle was"Totem Pole Cabins, built of logs. Just north ofhere is a roadside park (Right) with wooden tables", there was also a gas station one mile west of it.

Drive along Route 66 in Newburg

Begin your tour to the north (east) tip of this segment. Right beside I-44's Exit 176 and drive down the old Route 66. This is the only access to US 66 from the Interstate and the road is actually a dead end in Arlington. So after driving this, which was the 1926 to 1970s Route 66 alignment (Map with directions (total round trip to Arlington 6 miles), you will have to drive back the same way).

Harry Cochran built it in 1933, with a totem pole standing in front of it. It evoolved into a cafe, gas station and shop with six cabins. The highway was widened to a four-lane freeway in 1952 razing several buildings (at that time Charles and Velma Huntington ran the store). They sold it to Ralph Jones in 1957 who in 1963 moved it closer to Rolla near Doolittle and finally in 1977 to its present location in Rolla. 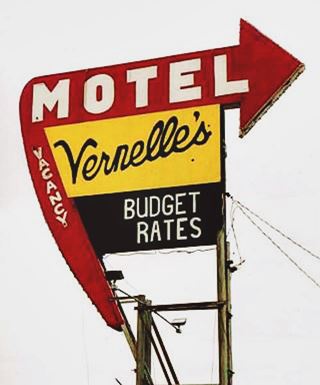 Vernelle's is a survivor (Visit their website) of all the realignments in the area, including I-44's recent change of course in the mid 2000's.

It began in 1938 when E. Gasser built a service station with a store and six cabins, he named it "Gasser Tourist Court". He sold out in 1952 to his newphew Fred who, with his wife Vernelle (1917-1915), renamed it after her and upgraded it by building a Cities Service station and a restaurant on the north side of the property. Both were demolished four-lane Route 66 built in the 1950s.

A decade later, I-44 was built over the old US 66 freeway andthe interstate's wider right-of-way chopped a piece off their property including the restaurant (1968). They sold out in 1960, but the place is still alive and kickin', don't miss their Classic Neon Sign:

The neon sign dates back to 1952 and is in pretty good shape. 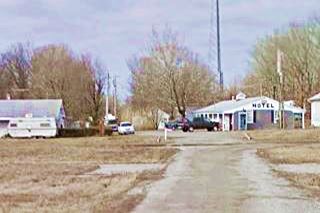 Take a left along the old north frontage road and visit the decaying remains of John’s Modern Cabins:

The cabins are pictured above, they are Private Property, dont tresspass. Built in 1942 it was originally known as "Bill and Bess's Tourist Camp", a primitive form of motel that predated regular motels. They sold out after WWII to John Dausch who renamed it after himself: "John's Modern Cabins" (modern but with an outhouse). The site included a store.Dausch also lost part of his land to I-44.

The cabins fell out of favor with travellers who sought better quality lodging (i.e. neighboring Vernelle's Motel), and eventually closed. Route 66 was decomissioned and I-44 replaced it, leaving the cabins on a frontage road, which became a dead end after I-44 was rerouted in 2003.

Further west, close to where the new I-44 alignment cuts across the older one, was a motel: Beacon Hill, named so because there was an airline beacon on top of a tower on a hill. The old motel had a restaurant and gas station, but these were razed when US 66 became a four-lane highway in 1953. The new I-44 built in 1968 cut off its access to the freeway and the only service road left was cut off when I-44 was realigned through the area. It burned in 2012. This is the end of your tour.

From Beacon Hill Motel site, go straight ahead and visit Arlington, a ghost town, at the dead end marking what once was US 66's 1926 alignment but remained cut off from the freeway in the 1940s. Then turn back, retrace our route to Exit 176 and head east along old Route 66 into Doolittle or take I-44 west into Jerome.

The first trail in the area was one opened by wild animals and later used by Indians and white explorers and trappers. They called it the "Great Osage Trail" (after the Osage Indians). It became a dirt road to serve the military telegraph line built in the 1860s and was the main road between Springfield and St. Louis, served by the stagecoach.

When cars became more common in the Ozarks in the 1910s, these dirt roads were in terrible conditions. The Inter-Ozarks Highway Association was formed to lobby for better roads and it succeeded in having Missouri State Highway 14 built. Itran from St. Louis, skirted Newburg and went on to Springfield. It was a gravel surfaced road. Route 66 was aligned along it in 1926.

From Newburg to Arlington

To head further west (i.e to Jerome or Waynesville) you must bypass this dead end using I-44 and once you cross the Little Piney River, get back on the old Route 66. This is shown in Redin the Map above

The original of Route 66 alignment is shown in the map, in Pale Blue (the sections marked in Black are those which no longer exist, after the different realignments of the Highway over the years). But originally it was a regular two-lane highway, paved by 1931.

In 1954 a new road, with two lanes was built north from Arlington they became the new westbound lanes while the old 1926 alignment became the eastbound lanes.

Beginning in 1967 the old US-66 ⁄ I-44 Freeway was improved again.The winding eastbound lanes (which were the original 1926 Route 66) were inadequate. So the former westbound lanes replaced them and a new set of westbound lanes were built between Newburg and Powellville, through Arlington and Jerome.

Check out our interactive Jerome to Newburg Alignments Map from 1926 to 1966.

Eventually the whole of US 66 in this area was upgraded into a four lane highway and after 1958 it coexisted with the new interstate I-44 (a state petition in 1962 to name the highway I-66 was denied by the AASHTO). Finally in 1972 the whole of Route 66 had been replaced by the freeway and in 1974 it was decided that the whole of US 66 from Chicago to Joplin would be eliminated. However this was delayed until I-55 in Illinois was completely brought up to Interstate standards. The signs were removed in 1977 but the last section to be bypassed was the one in Powellville, in 1981.

In 2003 the old I-44 in this section was replaced by a new, safer alignment to the north and west of the old one which was removed and cut off.

> > See the next segment Arlington to Jerome (west)