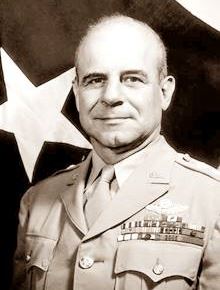 This was originally farmland between Rolla and Newburg. It grew halfway between Rolla and Newburg and was initially known as "Centertown". When Ft. Leonard Wood was established in 1941 during the days that preceded WWII, the area boomed, serving the workers that flocked to the region to work in building the fort. The town grew on the open fields alongside Route 66 and was known as Doolittle after it was formally incorporated in 1944.

Gen. Doolittle flew into a nearby airport in 1946 and spoke at the town's formal dedication ceremony after it incorporated.

James H. Doolittle, (1896 – 1993), a U.S. Medal of Honor Army general who fought in World War II, and commanded the famous "Tokyo Raid" of April 18, 1942: the first air strike in the Japanes Home Islands during WWII. It was a morale boosting raid that bombed Tokyo on a one way flight of 16 bombers from an aircraft carrier in the Pacific to landing fields in China. All planes crash landed and only 3 of the 80 crew members survived.

Surname of Irish origin, from Gaelic O Dubhlachta (where "Dubh" is: "black" and "lachta" derives from an obsolete forename).

Where to Lodge in Doolittle, Missouri

Accommodation and hotels near Doolittle...

> > Book your hotel in Rolla

More Lodging near Doolittle along Route 66

Motels and Hotels close to Doolittle

Find your room nearby, in Rolla:

The weather in Doolittle has well marked seasons and is the combination of humid continental and humid subtropical climates.

Doolittle is located in Missouri's "Tornado Alley" and Phelps County is hit by some 8 tornado strikes every year.

Map of Route 66 through Doolittle Missouri

See the alignment of US 66 in Doolittle, on our Missouri Route 66 Map, it has the complete alignment across the state with all the towns along it.

Below is the color key for Route 66’s alignment in Doolittle:
Pale Blue is the original 1926 to 1950s Route 66. (in Black the segments that no longer exist, razed by later alignments).
Blue: the segment that links the loop cut off by interstate I-44, not part of original US 66.

Route 66's alignment in Missouri: the Historic Route 66 through Doolittle

Doolittle and its Route 66 attractions

Jack DeVere Rittenhouse mentions it in his 1946 "A Guide Book to Highway 66": "DOOLITTLE, a community loosely strung along abouth two mi. of highway. (Pop. 208; Five-Oaks garage; gas; few cabins; cafe.)", he also added that two mi. east of it was a Gas Station.

This is a very narrow concrete slab bridge across the Little Beaver Creek built in 1926 to carry Route 66, basically a one-lane bridge, see it in this street view.

Head west the road curves when it meets I-44 (the road used to continue straight ahead, beyond I-44 and then curve back towards Doolitle), here you will drive alongside the freeway -this is not the original roadbed, but a road built to link the two tips cut off by the Interstate. At the western tip, the road curves again, here to your left is the old Hargis Tourist Camp:

Old Louis Hargis' Tourist Camp is now gone, but the old roller rink he built is still there, as you can see in this Street View. Just ahead, also on your left is a classic garage: 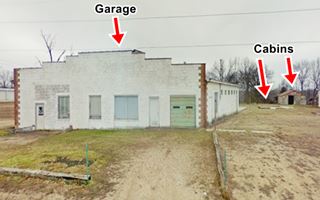 Ramsey's Garage also known as Centerville Garage (because it was roughly halfway between Rolla and Newburg) is a concrete block building with a false front stepped wall. It was built ca. 1941 for a business began in 1927 by Monroe and Hattie Ramsey who ran it until the 1950s when the highway became a four-lane freeway and was realigned north of town.

They had built some cabins during WW II to lodge those coming and going from Ft. Leonard Wood. You can see them behind the building.

Head west for 0.7 mi. and at the main crossroads in town is Malone's Service Station:

Pictured above at the top of the page. This was the Hudson Oil Company, a very simple rectangular building which dates back to 1941. It sold Hudson Oil Co. gasoline. Hudson was a texan company. Dan Malone bought it in 1952 and he sold Tidewater, Flying-A and Cities Service lubes and gas. It had twelve pumps at one time and a restaurant which was demolished in the 60's when Highway T was improved.

Continue west for 1.3 mi. and when the old Route 66 finally meets I-44 again, on your right you will see the T&T Cafe and Garage:

Also known as the "I-44 Antique Mall and Flea Market", it is a concrete block building which served as caféa and garage built in 1952. It was named after Terrill and Tabor - Joe and Ruth Tabor owned it. They had originally run a shop called Joe's Place but when US 66 became a four-lane higwhay and moved to the north of town, they built their new place next to it. Later it was managed by Hamilton Oil Co. and later it became an antiques shop and flea market. I-44 cut off access to it when it was built in the 1960s over the 1950s US 66, so it is accessible from the oldest Route 66 (now Eisenhower Dr.) See its street view.

You can continue westbound and explore the sights in Newburg and visit Arlington, a ghost town, at the dead end marking what once was US 66's 1926 alignment but remained cut off from the freeway in the 1940s. Or head east along old Route 66 into Rolla or take I-44 west into Jerome.

The first trail in the area was opened by deer and buffalo, and later used by Indians. It followed the divide in the Ozarks. After the late 1600s, white explorers and trappers followed it; they named it the "Great Osage Trail" (after the Osage Indians). The road used to build and service the military telegraph line built in the 1860s followed it and was known as the "Wire Road"; it became the main road between Springfield and St. Louis.

During the early 1910s, cars became more frequent in the Ozarks but the roads were full of potholes or muddy traps during the rainy periods. The Inter-Ozarks Highway Association lobbied successfully for a decent state highwy and that is how MO-14 was built between Springfield and St. Louis, and given a gravel surface. Route 66 was aligned along it in 1926.

From Doolittle west through Newburg

Route 66 does not go through Newburg, it crosses its western edge. The old road, paved in 1931 runs west from Doolittle and then curves to the south through Newburg towards Arlington. The original 1926 to 1951 road is shown in Pale Blue in the Map above. 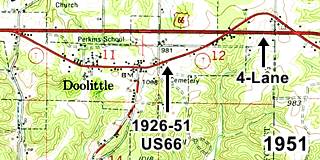 In 1951 a new road, with two lanes was built north from Arlington through Newburg. These two lanes became the new westbound lanes while the old 1926 alignment became the eastbound lanes. West of Newburg, at what is now Exit 176, a completely new four lane highway was built into Rolla bypassing the meandering old alignment through Doolitle. The new highway passed the town on its northern side and cut through a small curve of the 1926 alignment to the east of town, shown in Pale Blue in the map above. The roadbed cut by the four-lane highway is shown in Black. It did not cut it off, the old road crossed the new one, only later with I-44 as an interstate which required overpasses, was it cut off so then a new section of road was built on the south side of the freeway to link up the old route again this is shown in Blue.

See how the road and its alignments evolved over time just west of Doolittle in Newburg.

Check out our interactive Jerome to Newburg Alignments Map from 1926 to 1966.

Eventually the whole of US 66 in this area was upgraded into a four lane highway and after 1958 it coexisted with the new interstate I-44 (a state petition in 1962 to name the highway I-66 was denied by the AASHTO). Finally in 1972 the whole of Route 66 had been replaced by the freeway and in 1974 it was decided that the whole of US 66 from Chicago to Joplin would be eliminated. However this was delayed until I-55 in Illinois was completely brought up to Interstate standards. The signs were removed in 1977 and the road was finally bypassed in 1981.

> > See the next segment Newburg to Arlington (west)