Bellemont is the site of the Pine Breeze Inn, featured in the 1969 movie, Easy Rider. The village is set in a forested part of the San Francisco mountains inside the Coconino National Forest.

Bellemont is a tiny unincorporated village in Coconino County in the nortwestern part of Arizona. See a Map of Bellemont.

This region has been inhabited for more than 10,000 years. More recently, the "Sinagua" people lived in an area around Flagstaff, close to the San Francisco Peaks. They were farmers and hunter gatherers who left the region by the 1400's, forced by a long drought.

The Navajo people occupied their territory east of the mountains.

The Spanish from Mexico never settled the area and later Mexico lost it to the U.S. after its defeat in the 1846-48 War.

Lt. Edward Fitzgerald "Ned" Beale surveyed a wagon road from Ft. Smith Arkansas to California and passed just north of what is now Bellemont in 1857, the remains of his trail can still be seen.

Beale used camels as pack animals. But as they scared horses and mules, the Army never used them again.

During the American Civil War, the Unionist government separated the region from New Mexico and created the Territory of Arizona (1863). That same year, A military camp site at what would later become Bellemont named the place "Volunteer Springs".

After the Navajo were subdued and placed in a Reservation, settlers began arriving. In 1876 a sheep herder named Walter Hill settled at Volunteer Springs.

The site was chosen by the Atlantic & Pacific Railroad (later the Atchison Topeka and Santa Fe Railroad) to build a siding along its tracks west of Flagstaff in 1882.

The siding soon grew into a small community with a sawmill and logging operations. The village was named Bellemont

The post office opened in 1887 and adopted the name of the station.

During World War II, the U.S. Army established the Navajo Ordnance Depot to stockpile ammunition for the war in the Pacific against Japan. Since 1982 it is a training site of the Arizona National Guard.

The road was realigned in 1964 along what is now I-40, bypassing the few stores and gas stations in Bellemont.

There is lodging on Route 66 in Bellemont:

>> Book your Hotel in Bellemont

Lodging Near Bellemont along Route 66

Find your room in town, hotels in Bellemont:

>> There is a RV campground in Bellemont

The climate in Bellemont is dry and semi-continental. Seasons are well defined: winters are cold with heavy snowfall, spring is dry and windy.

Summers are hot and dry until July, then comes the humid summer monsoon period. Fall is dry and pleasant.

Due to its height, plenty of snow falls in winter.

Rainfall is scarce and averages 20.1 in per year (512 mm); around 8.8 in. (224 mm) fall during the Summer Monsoon period between July and Oct, and another 8 inches between December and March.

Yearly 74 inches of snow fall in the area (188 cm), between late Sept. and early May you may encounter snow.

All the area that is located to the west of Rocky Mountains hardly has any tornados, but they can strike:

The Bellemont Tornadoes of 2010

Bellemont was hit by two tornadoes in the largest single-day tornado-event in the history of Arizona: eight tornadoes struck the state.

This took place in Oct. 2010 and the 1st Bellemont tornado was the longest tracked tornado in Arizona history with a path of 34 miles (54 km) it damaged 100 homes and injured 7 people.

You can reach Bellemont very easily along Interstate 40 via Exit 185 west of Flagstaff.

Map of Route 66 through Bellemont Arizona

Check out YYY on our Arizona Route 66 Map, with the complete alignment and all the towns along it.

Color key For Bellemont only is the following:
(for the other parts of the map, check the color key of the map of the corresponding city)
Green: The 1941 to 1963 alignment at Bellemont and Parks.
Blue: The 1926 to 1931 alignment of Route 66 at Parks and Bellemont that can still be seen.

Route 66's alignment in Arizona: the Historic Route 66 through Bellemont

Bellemont, Arizona, its Sights and Attractions

Things to Do and Places to See

Bellemont is the "highest community along Route 66" with 7,130 ft. (2.175 m) it also has the famous biker icon, the Pine Breeze Inn is from the movie Easy Rider.

In his book "A Guide Book to Highway 66", published in 1946, Jack DeVere Rittenhouse mentioned the small village of Bellemont as follows: "a store, post office and two gas station. No other accommodations" its population at that time was 141. Two miles west of it was a trading post.

It was named after Belle Smith, the daughter of the general superintendent of the A & P Railway, F.W. Smith.

"Mont" is French for mountain and "Belle" as a name means Fair, lovely. It comes from the French word belle, meaning beautiful. Hence: "Beautiful Mountain".

After the Santa Fe Loop was bypassed in 1935, Glorieta Pass, which had been the highest point of Route 66 lost its place and Bellemont became the Highest coumminity along Route 66 at 7,130 feet (2.175 m.) 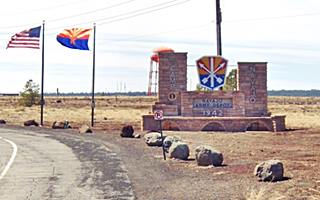 There is a small "modern" town on the north side of I-40, but the "classic" town is on the south side of the Interstate. Cross over at Exit 185 via Transwestern Rd. and reach the Historic route 66. At the junction you will see, ahead of you, the entrance to the Camp Navajo Army Depot. Take a left and head east along Historic Route 66 to visit the famous Easy Rider Motel location:

The "Inn" is on the north side of the road and can still be seen: a white building with a gas pump. It has a sign with the word "RICHFIELD" on the front, and on the side the current RV Camp name: " "Pine Breeze Inn R.V. Park" sign with the "z" the wrong way round.

The movie Easy Rider was written by Peter Fonda, Dennis Hooper and Terry Southern. It is the story of two men who after making a good profit from smuggling cocaine into the U.S. from Mexico and selling it, decide to travel east to New Orleans for Mardi Gras.

They ride on their motorcycles and come across all sorts of characters in the turbulent America of the late 1960s: hippies, conservatives, psychedelic drug users, rednecks and prostitutes.

The scene shot at Bellemont finds Wyat, whose nickname is "Captain America" (played by Fonda) and Billy (Hooper) -characters named after Wyatt Earp and Billy the Kid- arriving at a motel. 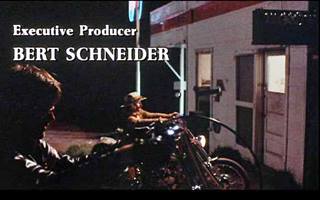 The Motel "NO VACANCY" scene
(Click on the thumbnail to enlarge).

They had come from California and it was dark, they stopped at the "Pine Breeze Inn" but when the owner saw them, he turned on the "No Vacancy" neon sign. Biker-hippies were not welcome at his establishment. The irked riders departed with Billy yelling a swear word at the proprietor. They camped down the road in a ruined building.

The town is not unfriendly towards bikers any longer and there is a Harley-Davidson dealer there, just south of I-40's exit 185.

The area around Bellemont

The area surrounding Bellemont is heavily forested with pines. But the village lies in an area that is naturally open, a "park" in the midst of the forest. South of the village is the springs that made it a choice spot for the railway station. Here the snow melt water precolates through the sandsone bedrock and the overlying lava.

There are several cinder cones and good views of Kendrick Peak and Mount Sitgreaves.

> > See this segment Winona to Williams

This volcanic field, centered on Flagstaff, covers about 1,800 square miles (4.660 km2) is a great outdoors area. Most of it is lies within Coconino and Kaibab National Forests.

The forested volcanic ranges include Piñon, Juniper, Ponderosa Pine, Fir and Bristlecone Pine. It is ideal for hiking, camping, skiing in winter and wildlife viewing.

It is made up of geologically-young volcanoes (6-million-years-old). The highest one is Humphreys Peak which is also the highest point in Arizona (12,633 ft - 3.853 m).

There are several National Monuments and both National and State Parks in the area and we describe them in our Parks near Flagstaff page.