Halltown is a small town, known as "Little Chicago", located on U.S. 66 it once had many antique shops, some survive: Cameron Antiques and Richard’s Antiques. Of its many shops and stores, you can still see the old Service Station the IOOF Lodge, a former movie theater (Main Street Building) and Cleo’s Beauty Shop.
There are two Route 66 hotels: the Las Vegas Hotel and Restaurant and the White City Motel.

Halltown is a town on Old Route 66 on the northwestern part of Lawrence County, in southwestern Missouri. (Map of Halltown).

Learn more about the history of Halltown in our Springfield, Missouri page.

Lawrence county created in 1845 was named after James Lawrence a naval officer in the 1812 English-American War.

The area was settled in the 1830s, after the Osage natives were displaced from the territory into reservations in what is now Oklahoma.

Halltown Cemetery or Rock Prairie Cemetery was established in 1838. Civil War soldiers of both sides were buried here. It is located 0.7 mi. south of town along State Highway Z (Map with directions).

Named after the Hall family. The surname from Middle English "hall" which meant a large residence -mansion, house. And used as family names for those who lived near a hall or were servants that worked at a hall.

Located on the Springfield to Carthage stage road, it was chosen for the alignment of the Ozark Trails in the 1910s, and when Route 66 was created in 1926 it adopted the Ozark Trails highway as its alignment through Halltown. The town catered to US 66 travellers and it had several grocery stores, garages and a hotel.

The town was bypassed by I-44, which had opened in 1958 between Joplin and Oklahoma City, and then went east along what used to be US-166, south of Halltown towards Springfield.

Where to Lodge in Halltown, Missouri

> > Book your hotel in neighboring Springfield

More Lodging near Halltown along Route 66

Motels and Hotels close to Halltown

Find your hotel in neighboring Springfield

>> Check out the RV campgrounds in nearby Springfield

The seasons are clearly defined in Halltown, which is located on the northern limit of the humid subtropical climate in the U.S. which provokes very humid weather in late summer.

Neighboring Springfield is said to be the city with the most varied weather in the United States.

Halltown is located within the infamous "Tornado Alley" and Lawrence County has an average of 8 tornado strikes per year.

Drive along historic Route 66 and Interstate I-44 to Halltown, those highways link it with Tulsa and Oklahoma City in the west and with Springfield and St. Louis in the east. U.S. Route 71 (overlapping I-49) links it with Fort Smith, Arkansas and Kansas City.

Map of Route 66 through Halltown Missouri

See the alignment of US 66 in Halltown, on our Missouri Route 66 Map, it has the complete alignment across the state with all the towns along it.

Below is the color key for Route 66’s alignment in Halltown:

Pale Blue: The 1926 and later alignments (until 1961) of Route 66 in other parts east and west of Halltown
Blue the 1961 alignment that bypassed Halltown.

Route 66's alignment in Missouri: the Historic Route 66 through Halltown

"The Antique Capital of the U.S."

Halltown and its Route 66 attractions

In his 1946 book "A Guide Book to Highway 66" Jack DeVere Rittenhouse describes the "classic" Route 66 during its heyday. He mentions it: "Halltown... 15 or 20 establishments line both sides of the highway here: gas stations, cafes, antique shops, stores." At that time the town had 168 residents.

He does not mention Plano, 4 mi. east of Halltown, but instead mentions (6 miles east) "Camp Ross Court, with a cafe and gas station" on the bank of Pickerel Creek, now gone, and 3 miles further east, "Gas station and cabins" which are still there (Modern Cabins which we describe in our Plano page). These were followed by "a small community... with a custom grinding mill (Left), gas station, grocery and general store." which is also still there, and which we describe (Here) in our Springfield page.

Tour the route 66 landmarks in Halltown

Start your tour at the eastern side of town and drive west through it, along MO-266 (Old Route 66):

On the northeast corner of Route 66 and North Dogwood St.

To your right, it is a large building (two-stories) built around 1930, it is currently an antique shop. See Street View.

Also to your right, the IOOF Lodge also known now as Whitehall Mercantile (an antique shop www.whitehallmercantile.com) is a two-story wood frame building in Victorian style built ca. 1900. It has a very steep pitched roof behind a falsefront wall facing the street.

Originally it served as a grocery store and the IOOF lodge held its meetings on the second floor. The false front has been modernized -now sheet metal, formerly it was built in wood. See its image below.

The Independent Order of Odd Fellows (IOOF) (Odd Fellows for short) is a secret society without any political or sectarian orientation. It was founded by Thomas Wildey in Baltimore, USA in 1819 (curious? check their website). 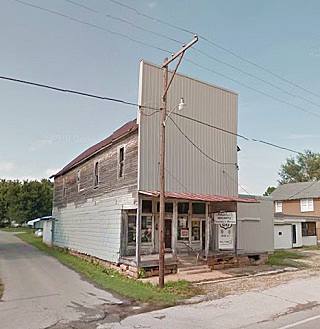 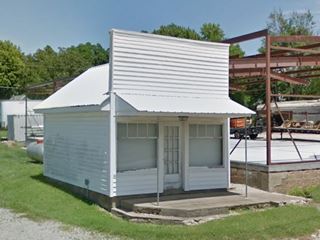 To your left, across the street.

The Las Vegas Hotel and Restaurant was built ca. 1930. The restaurant was on the first floor and the hotel rooms on the second floor. The small building to the right (west), was once a barbershop. It was built in Mission - Spanish Colonial Revival sytle.

Now it serves as apartments. See its Photo at the top of this page.

To your right, it was built in 1933 in central Halltown with a gabled roof and an awning porch, it is a small building also known as Robin’s Nest Family Hair Care was originally a Route 66 café and, after the 1970s a beauty parlor owned by Cleo Goodman. It is pictured above.

This building is located to your right next to Richard's Antiques, adjacent to it. It has two stories, and is built in stone. It dates back to 1907 and has arched windows and doors. At one time it served as a movie theater, now it is a warehouse.

To your right, on the western tip of town.

This wood frame building with stone and stucco walls was built around 1906. It has two rooms and served as a livery stable (a stable where horses are kept at livery), meat packing plant and more recently an antique shop.

On Route 66, 1 mi. west of town, about halfway between Halltown and Paris Springs. See map with directions.

The cabins were built in 1950, and were not mentioned by Rittenhouse, who drove by before they were built.

The main building in the center is the office, facing the highway. It has a gabled roof and bungalow style; it dates back to 1935.

The motel has ten cabins located around it in a semi-circle, linked by a circular drive. They are single unit cottages with attached garages and hipped roofs of pyramidal shape. They are built in concrete block with a stucco facing. Two lack garages and are bigger than the other eight.

Not in very good shape.

By 1910, the use of cars had increased considerably and the dirt roads and trails used in the countryside were in very bad shape. This led W. H. "Coin" Harvey (1851-1936) to conceive and create the Ozark Trails Association in 1913 to provide a good road from New Mexico to St. Louis MO. In Halltown, the trail followed the old highway that linked Springfield with Carthage.

In 1926, Route 66 was created and it was aligned on the Ozark Trail all the way to Romeroville in New Mexico. It passed through the downtown of Halltown as its Main Street.

West of the town Route 66 follows a straight course from Halltown to Avilla, which is shown in Pale Blue in the Map above. There is a small segment of the original 1926 road from Paris Springs through Spencer shown in Black in thje map above.

The 1926 map of the Missouri State Highway Commission shows what then was Route 60 (yes, 60 and not 66 because they had taken the original planned numbering and not the one that was later agreed upon and which prevailed: U.S. 66). The paved surface ended at Springfield and the road from there to Avilla it was already being paved with concrete, after Avilla it was again paved all the way to Kansas. By 1929 it was completely paved. The Missouri DOT roadmaps of 1929, 1933 and 1945-6 all showed "Halltown".

In 1961, the road through Spencer and Paris Springs was realigned and then, east of the latter, linked to former US-166 along which I-44 had been built (this is shown in Blue in the map above). This bypassed Route 66 and Halltown from Paris Springs, through Halltown into Springfield which then became MO-266. West of Paris Springs, into Carthage US-66 survived until the road was decertified.

> > See the next segment Halltown to Avilla (west)