Plano is a Historic Ghost Town, located on old U.S. 66. See what once was a Tydol Gas Station the mysterious ruins of Plano General Store (which some say was a casket factory and mortuary). Don't miss the other historic sites: the 1935 Modern Cabins Motel and the 1852 Yeakley Chapel.

Abandoned General Store -not a mortuary- in Plano, Missouri, Route 66

Learn more about the history of Plano in our Springfield Missouri page.

The county was established in 1833 and named after American Revolutionary War General Nathanael Greene.

The community's post office opened in 1895 but closed in 1903. The village never grew beyond a few scattered homes.

Probably named after Plano, in northern Texas (settled in 1851), which it traded with. The word is Spanish and means "flat" and was suggested because it was thought to mean "plain" as the area where the town was built.

The town offered gasoline to U.S. 66 travellers until it was bypassed by I-44 in the early 1960s, which linked Paris Springs with Springfield to the south, along what used to be US-166. The town became a Ghost Town.

Where to Lodge in Plano, Missouri

> > Book your hotel in neighboring Springfield

More Lodging near Plano along Route 66

Motels and Hotels close to Plano

Weather widget for Halltown, the town nearest Plano, to the west

Plano is located inside the "Tornado Alley" and Greene County has an average of 9 tornado strikes per year.

You can reach Plano along historic Route 66 and Interstate I-44 that links it with Tulsa and Oklahoma City in the west and with Springfield and St. Louis in the east. U.S. Route 71 (overlapping I-49) links it with Fort Smith, Arkansas and Kansas City.

Map of Route 66 through Niangua Missouri

Map of Route 66 through Plano Missouri

Route 66's alignment in Missouri: the Historic Route 66 through Plano

A Few old homes along US 66

Plano and its Route 66 attractions

Plano is a Historic Ghost Town, with a Former Tydol Gas Station, the ruins of Plano General Store (said to be a casket factory or a mortuary), and two more historic sites: the Route 66 Modern Cabins and the 1852 Yeakley Chapel.

The 1946 book "A Guide Book to Highway 66" written by Jack DeVere Rittenhouse does not mention Plano. Maybe by then its only service station had folded and only some homes stood near the highway.

Ghost Town of Plano its sights

The sandstone building on the southeastern corner of the junction was once a grocery store and Tydol service station. Now it is a private home. 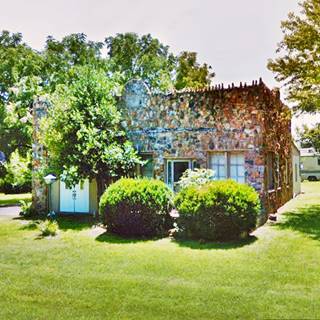 Tidewater Oil Company began as the Tide Water Oil Co. in New York City in 1887 and was well known for its "Flying-A" and "Tydol" brands which it began selling in the 1920s.

On the northwestern corner of the junction.

This two story sandstone building overgrown with ivy is said to be the ruins of a casket factory or a mortuary. But, that is a myth: the place was actually a General Store.

The building dates back to 1902 and is the store owned by Alfred Jackson. Pictured at the top of the page.

The Springfield-Greene County Library District, information on Greene County, Missouri tells us that John Samuel Corum Jackson (1845-1916) moved to Missouri from his native Tennessee and had nine children two of which lived in Plano: Quintilla "Quinn" Kelly Jackson Taylor (1877-1926) who married a farmer and Alfred Jackson (1878-1950) who was a merchant at Plano in the early 1900s.

The mortuary was located on the other side of the road in a now gone wooden building.

Head east, towards Springfield along MO-266 (Old Route 66) to visit an 1850s church and a former US 66 motel: Modern Cabins; it is a short 4.1 mile drive, see this Map with directions.

To your right. The chapel is a simple wooden structure built in 1852. The cemetery is next to it. See its Street View.

Head east again and, to your left is the former tourist cabin complex:

This was a Cabins complex, which were the first type of motels: individual cabins and a parking area. It was built in 1935 by Margaret and Ben Brewer who named them Graystone Heights Modern Cabins which eventually had eight cabins, a café and a Conoco brand gas station.

The place has been restored and now sports a refurbished "Modern Cabins" neon sign and vintage 1960s-70s Conoco gas pumps. It is the R & S Floral Factory Warehouse (randsfloral.com).

The motel went out of business when I-44 bypassed old Route 66 in this area.

From Halltown to Plano

In the early 1900s automobiles became more common, and the miserable trails used by carts were unfit for cars. That led W. H. "Coin" Harvey (1851-1936) to establish the Ozark Trails Association in 1913. The Ozark Trail ran from St. Louis in Missouri across Oklahoma, Texas and New Mexico where in Romeroville it met the Old Santa Fe Trail.

When Route 66 was created in 1926 it was aligned along the Ozark Trail through Plano.

The original alignment in Plano from 1926 to 1961 shown in Pale Blue in the Map above.

> > See the next segment Halltown to Avilla (west)