Rosati on Route 66 is the site of the now gone Cardetti & Sons Mercantile Co. Store, it also has Italian roots and a tradition of wine making: visit the Rosati Winery and the 4 M Vineyards.

Rosati is a small unincorporated community located on Route 66 in eastern Phelps County, central Missouri in the Ozarks foothills. (Map of Rosati).

View of the old Cardetti store, Route 66 in Rosati, Missouri

See our History of St. James, for a background on the history of the region.

Rosati was once known as Knobview, and was originally named in the 1840s for the three high hills resembling "Knobs" that could be seen just south of the settlement. The area was surveyed in the 1850s for the railroad and Thomas Kinsey Jr. opened the first store here in 1856; the site, which also had a post office was known as Kinsey's Station when the railway arrived there in 1860. The post office closed in 1882, reopened in 1893 and closed again in 1898.

At that time the area shipped out wood on the railroad, but the economy changed when Italian immigrants who had originally moved to Arkansas decided to look for more suitable land and in 1897 purchased it from the railroad, this established the Italian settlement in Knowbview (also spelled Knob View.

They were farmers and planted a New England variety of grapes (Concord) and raised apples, pears and other fruit as well as dairy products. This began the grape juice and wine industry in the area. In 1906, the St. Anthony Catholic Church was built, which continues to stand today.

In 1926 Route 66 was aligned just north of the town and that same year, on Nov. 25, a tornado hit the town destroying many buildings and injuring some citizens, the Cardetti Store was moved off its foundations. Shortly after (1931) the town was renamed "Rosati":

The village was named afger the first Roman Catholic biship of St. Louis, Joseph Rosati (1826), he was the first bishop west of the Mississippi. The word is a patronymic or plural of Rosato (pink, rose-colored)

Route 66 provided additional income to the town and there were two service stations on it. In the early 1950s it became a four-lane highway, now under I-44. Rosati was bypassed and left to its own devices.

It was a local resident, Russell Bliss who sprayed the roads in many towns of Missouri with oil to control dust in the 1970s, what he did not know was that it was oil contaminated with dioxin -a very toxic chemical product. When it was detected by the CDC and reported to the EPA, all the contaminated soil was removed and taken to an incinerator located in Times Beach (a town that was so contaminated that its residents were moved out and the buildings demolished. Now it is a State Park on Route 66).

Where to Lodge in Rosati, Missouri

Accommodation and hotels nearby...

More Lodging near Rosati along Route 66

Motels and Hotels close to Rosati

Rosati has well marked seasons, which are the combination of humid continental and humid subtropical climates.

Rosati is located in Missouri's "Tornado Alley" and Phelps County is struck by 8 tornados every year.

Weather widget for St. James the town nearest Rosati to the west

Map of Route 66 through Rosati, Missouri

Route 66's alignment in Missouri: the Historic Route 66 through Rosati

Rosati and its Route 66 attractions

Rosati has some interesting Italian wine making traditions: with Rosati Winery and 4 M Vineyards, it is also the sight of the now gone Route 66 icon, Cardetti & Sons Mercantile Co. Store.

The 1941 book, "Missouri, a guide to the "Show Me" state" published by the WPA called it "... a sprawling community of small farm sites rather than a town" and mentions its Italian origin and its wines. It had 200 residents in those days.

Jack DeVere Rittenhouse does not mention it in his 1946 "A Guide Book to Highway 66" he did point out that there was a gas station 2 mi. west of it, and a station with cabins in what is now Rosati, without naming the town.

On the south side of I-44, next to the railroad are the few scattered buildings that make up the village of Rosati. Here once stood "Cardetti Store": 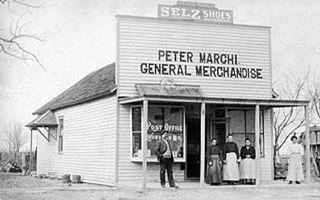 The old store, Cardetti & Sons Mercantile Co. is now gone, it was demolished in 2014. Its story begins in 1900, when Peter Marchi and A. Piazza open the first store in Rosati. It served as a school in 1901, and a post office after 1902. But in 1905 both dissolve their partnership. That same year Marchi opens another store (see photo). This was later purchased by R. M. Cardetti (Pictured above, at the top of this page) who operated the store until 1949 when he sells it to his son, Joseph "Peno" Cardetti. The store was hit by the 1926 tornado and it was moved off its foundations, but survived.

The store closed in 1976 and its unsafe conditions led to its demolition in 2014. Fortunately another familiy member built a replica of the old store in neighboring St. James, the Leo Cardetti Flags & Flag Pole shop, pictured below. 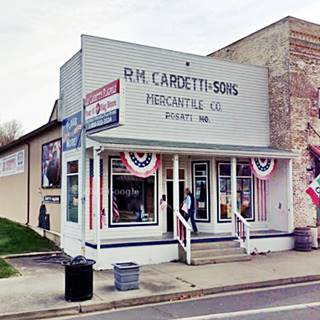 Little remains on the old Route 66, the former Zulpo's Filling Station opened by Louis Zulpo in 1929 is gone. It was the site of a Highway Robbery on July 20, 1930: four rookie gangsters from St. Louis stopped at the Knobview turnoff where the Zulpo station was located and robbed around $8. The bandits drove on to St. James while Louis Jr., 15, rang the police to inform about the robbery. Constable Peters caught them just outside of St. James 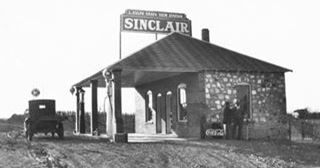 The Italian settlers planted grapes but these did not adapt, so they turned to an American variety, "Concord" grapes from New England. These were suitable for grape juice and sweet wines. The Rosati Winery opened in 1922, the Prohibition had an impact on wine production (it was banned) but, after it was lifted, the winery prospered. World War II with its labor shortage and lack of sugar hit the wine industry and Cardetti closed the winery in 1942. Welch Grape Juice Co. buys the building and buys the grapes for jelly and jams it sells to the US Army.

German POWs work in the plant during the war, brought by bus from Fort Leonard Wood (in St. Robert).

After the war it closed but reopened in 1971 only to close again in 1988. By then, the old grapes (used for juice or jam) were replaced by modern wine varieties and now Rosati has become a wine producing area with some 175 acres of grapes. Rosati Winery reopened in 2009 and is now a museum, gift shop and banquet hall (more information at their website). 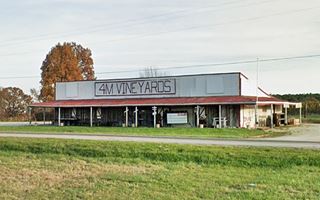 Book your
Hotels close to Rosati in neighboring

You can head east and explore the sights in Fanning 3.8 mi east (Map with directions) and Cuba the "Mural city", or drive west to St. James and Rolla. 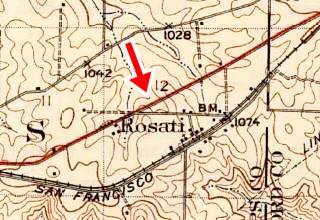 The original "trail" was created by roaming buffalo and deer across the plains to the Ozarks. The Illinois and Osage Indians used it and so did the French and English trappers. It later became a road following the telegraph line from St. Louis to Fort Smith: the "Wire Road".

When cars became popular in this area around 1910 the road was a dirt track with ruts and potholes that became a muddy trap when it rained. The Inter-Ozarks Highway Association lobbied to have the state to build a highway and it succeeded: MO-14 was built from Saint Louis to Springfield; it had a gravel surface in Rosati.

From Rosati to St. James

Drive 5 mi. west, along Old Route 66 (South frontage Rd. next to the eastbound lanes of I-44), toSt. James (Map with directions).

Route 66 was created in 1926 and used MO-14 it passed by Rosati's north side, this is shown in Pale Blue in the Map above.

In 1956 a new four-lane highway was built next to the older alignment, in Rosati, now under I-44.

Eventually the whole of US 66 in this area was upgraded into a four lane divided highway with overpasses and it coexisted with the new interstate I-44. A state petition in 1962 to name the highway I-66 was denied by the AASHTO as that number had been used already.

Finally in 1972 the whole of Route 66 had been replaced by the Interstate system and in 1974 it was decided that the whole of US 66 from Chicago to Joplin would be eliminated and decertified. However this was delayed until I-55 in Illinois was completely brought up to Interstate standards. The signs were removed in 1977 but even then, the last segment of the old Route 66 was bypassed in 1981.

> > See the next segment St. James to Rolla (west)