San Dimas, visit the landmark Pinnacle Peak Steakhouse with its cut-off ties and covered wagon, the old downtown styled like a Western Village with its Historic San Dimas Hotel built in 1887 (also known as the Carruthers Home, Walker House and the San Dimas Mansion) and the old Old San Dimas depot which is now a museum

San Dimas is a small town set on old Route 66 in Los Angeles County in southern California and is part of the Los Angeles metropolitan area. (Map of San Dimas).

The History of the city of San Dimas, California

This region of Southern California has been inhabited for the past ten thousand years. The natives encountered by the Spaniards when they explored California in the 1600s were known as "Tongva". The Spanish called them Gabrielino or Gabrieleño (after the San Gabriel Arcángel Mission established nearby in 1771 ).

The Mission owned a vast tract of land which it retained after Mexico became independent from Spain in 1821, but later had to give up during the "secularization" enforced by the Mexican government in 1837 when way Mexican Governor Juan Bautista Alvarado granted the land in 1837 to Ygnacio Palomares and to Ricardo Vejar.

Mexico lost California to the US after the 1846-48 war, and in 1850 California became a state of the Union.

After Palomares died in 1864 his widow sold the land and Vejar lost his part due to forclosure. The place at that time was known as "La Ciénaga" (Mud Springs).

The Atlantic & Pacific Railroad, which spanned the U.S. from Saint Louis to Barstow in California, and was a subsidiary of the Santa Fe Railroad, reached San Bernardino in 1885 and immediately set out to reach Los Angeles.

So its subsidiary, California Central Railway - CCR acquiered the San Bernardino & Los Angeles Railway and extended its line west from San Bernardino to Mud Springs -now San Dimas- in 1887 where it linked with the Los Angeles and San Gabriel Valley Railroad (also purchased by CCR) and proceeded via Pasadena into Los Angles through Arroyo Seco.

The area was developed by the San Jose Ranch Company in 1887, setting up a station there and changing its name to San Dimas after the local Canyon, north of the tracks.

The town was named after San Dimas Canyon in the San Gabriel Mountains. The Canyon was named after Saint Dismas (in Spanish "San Dimas"), who was one of the two thieves crucified with Jesus and canonized by Christ himself. The name originated in Greece -Dimas King of Thrace was grandfather of Troyan heroes Hector and Paris.

The townsite was platted just south of the Way Hill (1,090 ft.) and it became the hub of a farming community that grew citrus.

The land bubble burst in 1889 and the hotel built near the station to house the settlers never lodged any. It was later purchased by the Walker family and is now the Historic San Dimas Hotel (also known as the Carruthers Home, Walker House and the San Dimas Mansion).

A marmalade factory and four citrus packing houses were located in the town.

The USGS survey along the Santa Fe railroad of 1915 says the following about the town and its surroundings: "... West of Claremont a spur of the San Gabriel Mountains on the north extends nearer to the railway, and the San Jose Hills, a northern extension of the Santa Ana Mountains, approach from the south. Owing to these conditions the valley narrows to about 3 miles at Lordsburg. In order to pass the San Jose Hills the railway has been deflected to the northwest, a course that soon takes itnear the foot of the San Gabriel Mountains, which are closely skirted from San Dimas to Pasadena.... North of San Dimas (dee'mas) a mass of sandstones and shales with interbedded volcanic rocks is exposed at the foot the mountains... halfway between San Dimas and Glendora, the train crosses the dry wash of San Dimas Creek, which heads in a large canyon a few miles to the northeast. It is a good example of a wash formed by a powerful intermittent stream.".

By then the use of the automobile had grown greatly and the National Old Trails (N.O.T.) Association was formed to promote a highway linking New York with Los Angeles. It was built bordering the Santa Fe railway and the 1912 map by the Automobile Club of Southern California's map shows the highway running from Claremont (38 mi. from LA) and then after some curves, it headed towards Glendora, crossing the tracks there (28 mi.), but it did not show San Dimas (though you can see the station next to the tracks south of the road.

In 1926, the alignment of the N.O.T. highway became Route 66 in California. It ran along Foothill Blvd. which was widened into a four lane highway after 1931, by 1939 the "Guide to the Golden State" written by the WPA, described the San Dimas area as follows:

"... At 23.3 m. is a junction with San Dimas Canyon Rd. Right on this road to SAN DIMAS CANYON PARK [...] naturally wooded land (picknicking facilities) at the foot of the San Gabriel Mountains. Hiking trails lead into the mountains. The motor road winds up the canyon to WOLFSKILL FALLS, 11 m."

In the 1940s Caltrans road map, Route 66 goes through La Verne with a southeast to northwest course, and to the south of it, away from the road is "San Dimas". Then US 66 returns to its east to west course and enters Glendora, always along Foothill Blvd.

Jack DeVere Rittenhouse rode the whole of Route 66 and, in 1946 wrote his "A Guide Book to Highway 66" in which he says that the towns in this area "... are so close together as to be practically indistinguishable from each other..." adding "More towns you pass through include LA VERNE at 336 mi., GLENDORA, 241 mi.;..." not mentioning San Dimas.

By the 1950s, the citrus groves were affected by disease and many were uprooted, this made space for the growing Los Angeles suburbia. The freeway system was also expanding rapidly and by 1964, four years after San Dimas incorporated, I-10 replaced Route 66 as the main highway in the area.

Where to Stay in San Dimas

Lodging in the City

> > Book your Hotel in San Dimas

Find your room in San Dimas:

>> Check out the RV campground near San Dimas, in Pomona

The Weather in San Dimas

The weather in San Dimas is warm Mediterranean (Continental Mediterranean climate), which is semi-arid, it has hot and dry summers with cool - chilly winters.

The town has on average, 287 sunny days per year and the strong dry - hot Santa Ana wind blows through Cajon Pass during autumn (fall) drying out the area and increasing the risk of wildfires the foothill communities.

During winter the peaks of the San Gabriel Mountains receive plent of snow, but none falls on Route 66 in San Dimas.

As San Dimas is located right next to the Pacific Ocean, beyond the Rocky Montains (western limit for tornados) so there is no risk of tornados there.

Getting to San Dimas

See the alignment of US 66 in San Dimas, on our Route 66 Map for California, it has the complete alignment across the state with all the towns along it.

The following color key applies only to San Dimas.

Below you will find detailed information on Old Route 66 in San Dimas.

San Dimas and its Route 66 attractions

San Dimas has a short (just over 1 mile long) segment of Route 66. The town's attractions and landmarks are the Pinnacle Peak with its cut-off ties and covered wagon on US 66 and the "Western Village" downtown with the Historic San Dimas Hotel from 1887, and the Old San Dimas depot, a museum

Route 66 runs across the northern part of the city, so we will begin there and then head south along N. San Dimas Ave. to visit the town. It is a 1.7 mile itinerary (Map with Directions). Start in western San Dimas:

There is a "covered Wagon" as an eye-catcher in the parking lot. A homage to kitschy Route 66 landmarks. The place is which opened in 1967, is a steak house (a simple place to eat ribs and steaks with no-frills).

It has an interesting rule: "NO TIES ALLOWED", which if not removed promptly, are cut off and hung from the rafters. So don't wear a tie!.

The covered wagon at Pinnacle Peak:

It is also known as: The San Dimas Hotel, Walker House, the Carruthers Home and the San Dimas Mansion.

Built in 1887 to serve as a railroad hotel, it was designed by Joseph Newsom in Queen Anne style which was favored during the Victorian period.

It was finished just as the land bubble burst so it never had a single paying guest. The San Jose Ranc Co., who'd built it, sold it in 1889 to James W. Walker, a wealthy merchant from Kentucky.

It remained in the family until the last occupant, Mrs. Raymond I. Carruthers (J. Walker's granddaughter), and her family leased it in 1979 and a restaurant (San Dimas Mansion) opened there, serving guests like Richard Nixon and John Wayne, but it closed in the 80s. The place was finally purchased by the City in 2000 and renovated the building, it now houses the San Dimas Historical Society and Museum and a community art gallery.

Go south from the Mansion and take a right along Bonita Avenue. You will soon notice that the place has an interesting architecture: the stores are styled in a Western look.

This Old West appearance dates back to the 1970s and includes wooden sidewalks and restored facades; There are many 1900s brick buildings along Bonita Ave. (See image abovea) In tune with this western ambiance, there is a Rodeo held in town every year:

Held in October, it has been held for over 20 years, and the 2016 event will be the 22nd Annual Rodeo. It takes place at Horsethief Canyon Park. Visit the City's website for more details. 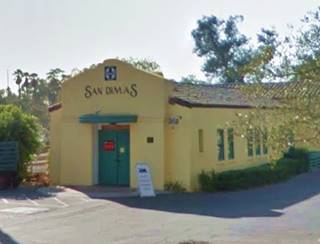 The old railway depot now is the home of the Pacific Railroad Society and a museum (Visit their website), and has been restored to its former glory.

The Alignment of Old Route 66 in San Dimas California

From Pomona to San Dimas

The first road through the area, built for cars, was the National Old Trails highway (N.O.T.), which was laid out in the early 1910s to link Los Angeles with New York. It followed the Santa Fe railroad tracks in California, Arizona and New Mexico and went through San Dimas.

The course of Route 66 between Pomona and San Dimas is a simple segment, both towns are next to each other so you will not notice where one ends and the other begins.

Route 66 extends for only 1.1 mi along Foothill Boulevard in San Dimas, between Baseline Rd. and N. Cataract Ave.