Pomona has interesting Route 66 attractions: the Vintage neon sign at Coates, the Stardust Motel and a Vintage Gas Station plus two historic landmarks: the Ygancio Palomares Adobe (1850) and the Primera Casa Adobe (1837) as well as the Art Deco Pomona Fox Theater (a historic place). Don't miss the Car Shows and Drag Racing at the Fairplex.

The History of the city of Pomona, California

For the early history of the area, read the History of Rancho Cucamonga. Present Pomona was formerly part of the lands owned by the San Gabriel Mission. In 1834 the Mexican government seized the land from the church and granted it to local citizens.

In this way Mexican Governor Juan Bautista Alvarado granted the land in 1837 to Ygnacio Palomares and to Ricardo Vejar. They established a vast ranch spanning 15,000 acres, it was named "Rancho San José". This covered what is nowadays San Dimas, Azusa, Covina, Walnut, Glendora, La Verne, Claremont and Pomona.

Palomares had ranch hands build his home with adobe bricks (sun dried mud and straw bricks), and he named it "Primera Casa" the "First House" which he lived in with his wife, Concepción López de Palomares for 17 years. Then they moved to a larger home built 1.2 miles to the northeast.

Their second home is known as the Ygancio Palomares Adobe and it was located on the trade route linking San Bernardino with Los Angeles.

Both historic homes survive to this day and can be visited.

The development company organized a contest to name the new settlement, and it was won by a local named Solomon Gates who suggested Pomona (Aug. 20 1875).

It was the name of the Roman goddess of orchards and gardens. Though in those days there were no orchards or citrus groves in Pomona.

The railroads crossed the area in the 1880s and the town was incorporated it 1888 and became a charter city in 1911.

The Pomona College was established in the town in 1887 as a "New England" style University, it was coeducational but it moved to neighboring Claremont in 1890, which became a "college town"

Citrus rances gave Pomona the title of "Queen of the Citrus Belt" in the 1920s. But later, after World War II, urban sprawl advanced on the olive groves, orchards and vineyards, as development made space for new residents.

Downtown Pomona was located next to the railway station of the Southern Pacific Railroad (SP) which linked it with Los Angeles through Walnut and San Gabriel. The use of cars had grown and by 1910, two roads passed through the town, one ran next to the SP Railroad as a continuation of Valley Blvd. into Riverside and from there to San Bernardino. Another was built to the north of Pomona following the Santa Fe Railroad tracks, from Pasadena, east, into San Bernardino; it was the National Old Trails (N.O.T.) Highway running along Foothill Blvd.

The 1912 map by the Automobile Club of Southern California's map shows the N.O.T. highway running on the north side of the Santa Fe Railroad in Los Angeles County, passing through Claremont (38 mi. from LA) and heading towards Glendora after curving just east of what is now La Verne.

Route 66 through the city

This N.O.T. highway was incorporated into the alignment of U.S. Highway 66 created in 1926, on the north side of the town, while further south, other U.S. highways were aligned through the central part of Pomona.

The Claremont and La Verne portion of the new highway was completed in 1931 and the whole highway up to San Bernardino became in 1938 the first four-lane divided highway in California.

The 1940s Caltrans road map shows Foothill Blvd. (US 66) running through unincorporated land west of Claremont. At that time the Pomona city limit was further south as the town was centered on US 60, 70 and 99, and did not reach US 66 in the north, which was in an area of open fields. Only after passing CA-71 (which linked Route 66 with Pomona) did Route 66 enter another town: La Verne.

Jack DeVere Rittenhouse rode the whole of Route 66 in 1946 and wrote his book: "A Guide Book to Highway 66". He describes this area saying that the towns in this area "... are so close together as to be practically indistinguishable from each other..." yet he did not mention Pomona, as it was located five miles south of the Mother Road.

Route 66 was definitively bypassed in this area in 1964, and the traffic switched to the freeways.

Where to Stay in Pomona

> >Book your Hotel in town: Pomona

More Lodging near Pomona along Route 66

Book your hotel in Pomona

>> Check out the RV campground in Pomona

Pomona has an average of 288 sunny days every year. During autumn (fall) the Santa Ana wind blows as a hot and dry blast, drying out the area and increasing the risk of wildfires in the foothills of the San Gabriel Mountains.

Early summer is usually overcast ("Mat Gray" and "June Gloom") due to the damp oceanic air flowing in.

During winter the peaks of the San Gabriel Mountains receive plent of snow but don't expect snow in Pomona.

Pomona is located very close to the Pacific Ocean so there is no risk of tornadoes here.

Map of Route 66 through Pomona California

See the alignment of US 66 in town, on our California Route 66 Map, it has the complete alignment across the state with all the towns along it.

Route 66's alignment in California: the Historic Route 66 into Pomona

Below you will find detailed information on Old Route 66 in Pomona.

Pomona and its Route 66 attractions

A short part of Route 66

Route 66 in Pomona a City Tour

This tour is 9.2 miles from tip to tip (See tour map with directions) and covers the Vintage sign at Coates, the Stardust Motel, a a former Route 66 Gas Station, two historic adobe homes from the mid 1800s (Ygancio Palomares Adobe -1850 and the Primera Casa Adobe -1837) and an Art Deco movie theater in downtown Pomona plus the Drag racing and Classic Car Show venue in Pomona.:

We have mentioned that Route 66 ran several miles north of Downtown Pomona, which was crossed by US highways 60, 70 and 99.

Furthermore, during the classic days of Route 66, the alignment of the highway did not even cross the city's borders. Only by 1956 did Pomona's northernmost fringe reach Route 66 and border it for roughly 100 yards, on the south side of the highway, on the 300s block of E Foothill Blvd. where the America Inn & Suites now stands (See this 1956 map).

Since then the city has extended northwards, but Route 66 still crosses this narrow segment, barely 0.8 miles long, and four miles north of downtown Pomona.

Development has removed all the old buildings from Route 66, but some classics remain: 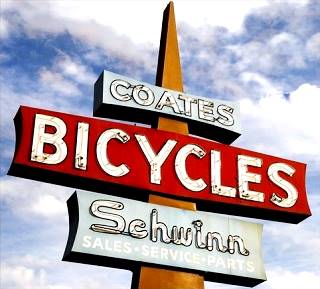 The neon sign at this bike shop which has been open since the 1930s, is a jewel worth seeing. It is on the south side of Route 66. Street View.

Head west, on the north side of the road is a motel which seems to have been there for many years (we have not been able to find any reference to it from the 1940s, 50s or 60s though):

See a Photo above.

You can Book a Room in the Stardust Motel

There is what used to be a gas station on the northwest corner of Sumner Ave. and Foothill Blvd. now it is a garage. You can still see the concrete islands on which the pumps used to be mounted, which are now painted yellow. There are two of them meaning it had four service lanes.

The building has two service ports -garage and repair shop- plus an office. The canopy has been removed. The pumps' islands are marked with red arrows in the image below:

Now you must venture further south, into Pomona proper, to see the following attractions:

La Primera Casa (Spanish for "The First House") is an adobe building which served as the home of Ygnacio Palomares and his wife in 1837. Read more about them and the early history of Pomona above.

Both adobes are historic sites and operated by the Pomona Historic Society.

Head into the town itself to visit an Art Deco movie theater, the Pomona Fox:

Opened in 1931 it is an Art Deco building that premiered many movies in town. Later it was abandoned and bought by the city in 2000. Now it is being restored.

Are you interested in cars? and Drag Racing Competition, then Pomona is the place to visit on your Route 66 roadtrip. (see map above, for directions)

Held at the NHRA Auto Club Raceway in Pomona (visit the NHRA website to check schedules). In winter.

The famous "Pomona Swap Meet and the Classic Car Show" is held seven times per year at the Fairplex and thousands of classic cars come to the meet. Check the Car Show's Website for dates and full information.

Book your
Hotels and Motels in town

The Alignment of Old Route 66 in Pomona, California

From Claremont to Pomona

The first road through what is now the northern part of Pomona, built for cars, was the National Old Trails highway (N.O.T.), which was laid out in the early 1910s to link Los Angeles with New York. It followed the Santa Fe railroad tracks in California, Arizona and New Mexico and it passed north of downtown Pomona.

The course of Route 66 between Claremont and Pomona is a simple straight segment, both cities are next to each other so you will not notice where one ends and the other begins.

Route 66 extends for only 0.8 miles along Foothill Boulevard in Pomona's northern reaches, between North Towne Ave. in the east and Williams Ave. in the east, next to La Verne.

A Guide to the Golden State, Federal Writers' Project of the WPA, Hastings House, New York, 1939.