Sierra Madre in California is very close to Route 66 and its attractions include the 1900s Sierra Madre Playhouse theater, the 1911 Hotel Shirley and the Guinness Record breaking Wisteria vine. Don't miss Mount Wilson and its trail or Waldo Ward Gourmet Foods (since the early 1900s).

Sierra Madre (See-er'-a Mad-rei) is a city located Route 66 in Los Angeles County in southern California on the San Gabriel Mountains' foothills; it is part of the Los Angeles metropolitan area. (Map of Sierra Madre).

Strictly speaking, Route 66 never went through Sierra Madre: Old 1926-1938 Route 66 ran just south of the city limits of Sierra Madre, 0.8 miles from the center of the city, in an area that was open fields north of Arcadia and easto of Pasadena. It was the only town in the area. South of Foothill Blvd. were the tracks of the Santa Fe Railroad. Then, in 1938, US 66 was realigned further south, along Colorado St. bypassing Sierra Madre permanently.

The history of Sierra Madre

The foothills of the San Gabriel Mountains have been inhabited for over 10,000 years. When the Spanish explored the area in the 1600s they encountered a hunter - gatherer society, the "Tongva", which they named after the mountain range where they lived, Gabrieleños or Gabrielinos.

A Mission was established nearby in 1771 (San Gabriel Arcángel) and the original "Mount Wilson Trail" was built by the natives to carry timber down from the mountains to the Mission.

The land owned by the Mission was nationalized by the Mexican government (Mexico had gained its independence from Spain in 1821) and granted the land to Mexican citizens in the 1840s.

Hugo Reid, a Scotsman who had naturalized Mexican was one of them, and he receieved a land grant in 1841 which he named "Rancho Santa Anita".

Rancho Santa Anita had been acquired by Elias Jackson Baldwin in 1875. He sold an 845 acre tract to Nathaniel Carter in 1881. Carter added more land in 1888 and established his Villa Sierra Madre on it.

The Los Angeles and San Gabriel Valley Railroad built a line through the region and linked it with the Santa Fe Railroad in 1887, the station (Santa Anita Depot) was built just south of Sierra Madre in 1888.

The words are Spanish and mean "Mother Range", it was given to them by the Spanish explorers in 1775: "Sierra Madre de California" becaue it seemed that the other ranges that spread inland: the Sierra Nevada, Coast Mountains and San Bernardino Mountains sprung up from it.

By the way, the 1948 film "The Treasure of the Sierra Madre" starring Humphrey Bogart, is about another range, in Mexico, with the same name.

The City was incorporated in 1907.

The Automobile Club of Southern California (ACSC) 1912 map does not show Sierra Madre. The Foothill Blvd. runs from Monrovia to Pasadena without any towns along it. It does show the location of Sierra Madre without naming it. By then, the use of the automobile had grown so much that the National Old Trails (N.O.T.) Association was created to promote a highway linking Los Angeles with New York. The road, when built, ran along Foothill Boulevard.

US highway 66 (Route 66) was created in 1926 and it was aligned using the roadbed of the N.O.T. highway in the San Gabriel Valley. The 1935 Road map of Los Angeles shows Route 66 following this same alignment, it also shows the town of Sierra Madre, north of "Santa Anita" racetrack and NW of Arcadia. However, the 1939 map displays a newer alignment, further south, following Huntington Dr. into Arcadia and then west along Colorado Pl. and Colorado St. into Pasadena.

The 1939 "Guide to the Golden State" written by the WPA described the Sierra Madre section of Route 66 as follows:

Just after the end of World War II, Jack DeVere Rittenhouse rode along Route 66 (1946) collecting information for his famous: "A Guide Book to Highway 66". He mentioned that there were many towns in this area, and lists them without adding too much : "... Now you pass through SIERRA MADRE at 353 mi. and soon enter PASADENA at 359 mi.".

The Los Angeles freeways and the Interstate highways that sprung up in the late 1950s and early 1960s marked the end of Route 66 in Sierra Madre, as it was finally bypassed in 1964.

Sierra Madre and the SF film, "The Invasion of the Body Snatchers"

The 1956 film "The Invasion of the Body Snatchers" was filmed in Sierra Madre, starring Kevin McCarthy, Dana Wynter and Larry Gates. This movie was selected in 1993 for preservation in the U.S. National Film Registry by the Library of Congress because of its cultural, historical and aesthetical significance". It is a classic 1950s "B Movie".

Where to Lodge near Sierra Madre

Lodging close to the City of Sierra Madre

> > Book your Hotel nearby in Arcadia Hotels or in Pasadena.

>> Check out the RV campground near Sierra Madre, in Pomona

The Weather in Sierra Madre

The climate in Sierra Madre is a "Warm Summer" Mediterranean one. Rather dry and hot in summer but cool and wet during winter (which is the rainy season). The average monthly temperatures does not exceed 71.6 °F (22°C).

Sierra Madre has some 290 sunny days each year and during fall (autumn) strong dry winds blow from the desert (Santa Ana winds) drying out the area and increasing the risk of wildfires in the foothills.

During winter the average high is (Jan) 67.8°F (19.9°C) and the average low is 44.3°F (6.8°C) in winter, the peaks of the San Gabriel Mountains receive snow, and may very rarely fall in Sierra Madre. You may experience frost during winter (Dec. to Mar.)

Rainfall averages 22 in. per year (559 mm), with the period April to October being the driest one. There are some 43.5 rainy days per year

Sierra Madre is located very close to the Pacific Ocean and well beyond the Rocky Montains (which are the western limit for tornados) so there is no risk of tornados in the city.

Getting to Sierra Madre

See the alignment of US 66 in this town, on our California Route 66 Map, it has the complete alignment across the state with all the towns along it.

Below you will find detailed information on Old Route 66 in Sierra Madre.

Sights and Attractions in town

Sierra Madre and its Route 66 attractions

Sierra Madre, "Village of the Foothills"

Sierra Madre though it was not located on Route 66, was very close to it. You must visit its classic theatre, the Sierra Madre Playhouse and the 1911 Hotel Shirley. The town boasts a Guinness World Record Wisteria vine. Other sights include the Mount Wilson trail and the Gourmet foods of Waldo Ward since 1891. 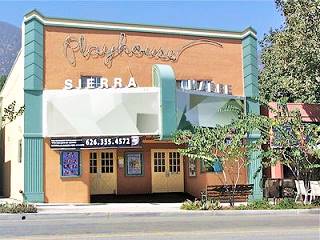 The building dates back to 1923, it served as the Wistaria Theater until 1929 when it was renamed "Sierra Madre Theater". Later it was an arcade and now it is the venue of the "Sierra Madre Playhouse", a non-profit organization. The building was renovated in 1998.

Head back to N. Baldwin Ave. and take a left to visit Hotel Shirley:

Wisteria: the largest flowering plant in the world

The city is also known as "Wisteria City", and a wisteria (also spelled wistaria) ppaers on the city's seal because of the enormous wisteria vine growing in town.

Wisteria (also spelled Wistaria or Wysteria) is a genus of flowering plants belonging to the pea faimily. They are climbing vines, with woody trunks, native to Eastern Asia (Japan, China, Korea) and Eastern USA. 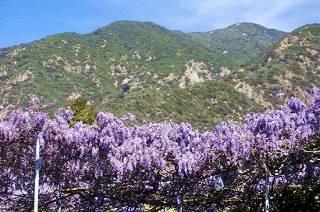 The Wisteria at Sierra Madre, by Xinhua

The Chinese wistaria (Wisteria sinensis) growing in Sierra Madre, has been proclaimed by the Guinness Book of World Records as the world's largest flowering plant. But we have not found it mentioned at Guiness' website, maybe an urban myth?

The wistaria (wisteria) was bought by Alice Brugman from the Wilson nursery in Monrovia in 1894. And she planted it on her home's front porch. The vine grew and the enormous weight of its branches collapsed the building.

The wisteria, after 120 years, now weighs about 250 tons and its branches span 500 ft.(150 m) covering about 1 acre in two properties. The sweet smelling pale violet blooms reach their peak in March.

The event his held in the downtown at Sierra Madre Blvd. and N. Baldwin Ave. with music, food trucks, handicraft vendors and more. There is an open-house at the two properties where the vine grows.

You can visit more sights in the area, further from Sierra Madre's downtown:

The mountain (5,710 feet - 1.740 m) is named after Benjamin "Don Benito" Davis Wilson who owned Rancho San Pascual and a winery. He built a trail in the 1860s to bring wood from the mountains to make casks for his wines. This was known as the "Mount Wilson Trail".

In 1889, Harvard College established the first Mount Wilson Observatory so the trail was expanded, to allow the telescope to reach the summit. That same year, a toll road was opened to the public, the "New Mt. Wilson Trail". It became very popular.

In 1908, the first Mount Wilson Trail Race was run, and after a long pause between World War II and 1966 it has been run continuously since then. Visit the official website: www.mountwilsontrailrace.com.

Created in 1967 and dedicated in 1968, Sierra Madre became the first city in Southern California to own a wilderness area. Later (1993), the Sierra Madre City Council added the Mt. Wilson Trail to its Register of Historic Cultural Landmarks.

Edwin Waldo Ward Sr. came to Sierra Madre in 1891 and bought a 10 acre plot of land. He planted Navel oranges and Seville Oranges and began producing his own marmalade in the early 1900s. Ward is still operating and selling jams, jellies, syrups and olive oil. www.waldoward.com

Book your
Hotels in neighbouring Arcadia:

From Arcadia to Sierra Madre

The first highway through the area built specially for cars, was the National Old Trails highway projected in the early 1910s to link Los Angeles and New York, it passed just south of Sierra Madre.

There were two alignments of US 66 close to Sierra Madre. The original one, followed by the N.O.T., along Foothill Blvd. was the one used by Route 66 when it was created in 1926, and a newer one which replaced it in 1938, further to the south along Huntington Dr. and Colorado Place.

This is shown in Black in the Map above. Driving east to west, coming from Monrovia, the old route 66 headed west along E. Foothill Blvd. across norhtern Arcadia and then, to the south of Sierra Madre. The road took a left to the south, on San Gabriel Blvd. up to E. Colorado Blvd. at this point old and new alignments meet and head straight along it westbound, into Pasadena. See the Map of the 1926-38 Route 66 near Sierra Madre.

This is shown in Pale Blue in the Map above. At that time, Foothill Blvd. was improved eastwards all the way to San Bernardino, work that began in 1931. So the alignment of US 66 was widened and straightened out, to make it safer. This led to the bypassing of the roundabout road across the downtown area of Monrovia along Foothill Blvd.

Instead, Route 66 kept westbound straight along Huntington Drive across Monrovia and then into Arcadia, where it curved around the racetrack and became E. Colorado Place, and continuing along Colorado St. westwards where it meets I-210 (which in those days was the railroad corridor) just south of Sierra Madre and continues all the way to Pasadena. See the Map of the 1938-64 Route 66 south of Sierra Madre.

The course of Route 66 between Arcadia and the area south of Sierra Madre is simple: both towns are so close to each other that you will not notice where one ends and the other one begins.

Colorado Street and Colorado Boulevard carried the pre-1964 Legislative Route 161 name from its west end to the merger with Huntington Drive (via Colorado Place).