Bushland is a placid small town on Historic U.S. Route 66; it is famous for its "Cadillac Ranch" (Ten Cadillac cars buried nose down in the ground).

Bushland is located in the south of Potter County, in the central region of the Texas Panhandle, it is an unincorporated community that straddles I-40, 14 mi. west of Amarillo.

The Panhandle region has been inhabited for over 10,000 years. The Clovis stone tools of Paleo-Indians were found nearby in Clovis New Mexico, and are among the oldest in the Americas.

The Spanish explored the region in 1541 but it remained under control of the Comanche and Kiowa Indians, who hunted buffalo on the plains. After Texas' independence and its inclusion in the United States, war between Indians and the U.S. led to the defeat of the former and their internment in reservations.

The plains opened up to settlers and the County of Bexar was organized in 1876. Shortly after, William Henry Bush visited the region scouting for suitable land for a ranch for his father-in-law, inventor of barbed wire, Joseph Glidden.

Glidden bought the land chosen by Bush and set up his Frying Pan Ranch in 1881.

The railway arrived (Fort Worth - Denver railway) in 1887 and that same year Potter County was formed.

Born in Martinsburg New York, he worked his way from an apprentice to a partner in a wholesale hat company in Chicago. In 1877 he married the only daughter of Joseph F. Glidden the inventor of modern barbed wire.

Glidden commissioned him to go to the Panhandle to scout for land for a ranch to field test Glidden's barbed wire. Bush selected well watered ground at Tecovas Spring which Glidden and his partner H. B. Sanborn purchased as the basis for their Frying Pan Ranch. Bush was made a partner.

Bush continued in the hat business but was an active promoter of Amarillo, buying land in the new town.

Glidden transferred his ranch to Bush in 1898 at a time when Bush was lobbying for the Chicago, Rock Island and Gulf Railway to acquire the Choctaw, Oklahoma and Texas line, which took place in 1903, followed by tracks from Amarillo to Tucumcari, New Mexico. Bush gave the right of way through his ranch.

He donated land on this line for a station to ship out his Frying Pan produce. He lived in Amarillo till his death. Bush was a patron of the Art Institute of Chicago and the Amarillo Public Library. His gift of land in 1900 established the site of St. Anthony's Hospital.

His heirs still own land in several Panhandle counties.

The town was dedicated on July 3, 1908 by Bush and his partner S. H. Smiser. Bush named the streets that run north to south after relatives and friends of Mr. Bush, for instance: Simmons and Robinson were his sisters' married names.

Settlers began to arrive and a post office opened in 1909. A school district was established. Bushland's First Baptist Church was organized in 1914 and still cares for the community's religious needs.

Population rose to 175 by 1940 and has more or less remained stable until this day.

From Bush to Bushland

The station was called Bush Stop but later switched to Bushland, apparently after W. H. Bush's wife persuaded the station master to repaint the station signs with the new name because the shabby town gave an unfavorable image of the family's name.

Where to Stay in Bushland

Neighboring Amarillo has a large variety of places to stay: Hotels and Motels in Amarillo

>> Book your Hotels in Amarillo

Find a room in neighboring Amarillo

What is the Weather in Bushland?

It is very probable that you may encounter Snow during winter (first snowfall is usually during early December). Between 17 and 40 inches of snow may fall between September and May. (43 to 102 cm).

The region around Amarillo is one of the windiest in the U.S., and also part of "Tornado Alley". Read more: Tornadoes on Route 66.

Bushland is the first town to the west of Amarillo (14 mi away) along I-40.

See the alignment of US 66 in Bushland, on our Texas Route 66 Map, it has the complete alignment across the state with all the towns along it.

The color key valid for Bushland only is:
Pale Blue is the driveable original Route 66 alignment in TX
Blue is the old US 66 into Amarillo and⁄or old alignments in Western Texas
Black: Jericho Gap and other dirt segments.

Route 66's alignment in Texas: the Historic Route 66 through Bushland

Below you will find full details on Old Route 66 in Bushland.

Bushland is a small town located on US 66 (now I-40) with several historic sites close to it:

This was the first large cattle ranch to be fenced with barbed wire, in 1881. It was owned by the inventor of barbed wire, Joseph F. Glidden who purchased it to conduct an effective field test on his invention. It was a success.

The land was selected by his son-in-law, W. H. Bush (after which Bushland was named), and quickly bought by Glidden and his Texan associate Henry B. Sandborn.

It was enormous and spanned the southwest of Potter County including Tecovas Spring. Amarillo's Western Avenue is on the ranch's original eastern boundary. The fence used cedar posts cut from trees in the Palo Duro Canyon and cost $39,000.

Tecovas Springs is 6 miles (9.6 km) northwest of the marker. It has been a strategic point since prehistoric times. The spring provides a continual flow of fresh water, a key resource in the arid Panhandle region.

The sources of Tecovas Creek are just north of I-40 a couple of miles west of Bushland.

Paleo-Indians and later Indians, traders and hunters camped there. Comancheros and Indians used it as a trading and bartering post. By the 1800s it was a summer range ground for Mexican sheep men.

John S. Summerfield selected the place as a surveyor for Gunter & Munson, as the site for placing the Frying Pan ranch's main buildings in 1881.

The old springhouse survives to this day and bears a memorial plaque.

The Deadly Underpass of US 66

The old alignment of US 66 west of Amarillo coincides with the modern West Amarillo Blvd. At Soucy it takes an east - west direction. 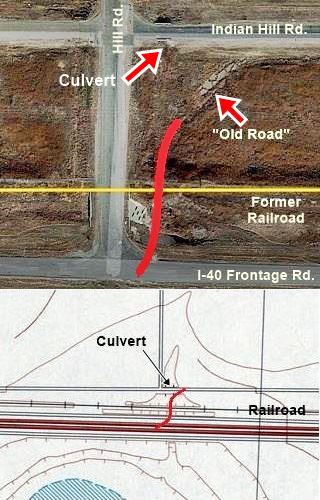 After passing in front of the Historic Amarillo Helium Plant the modern alignment turns left, passes under what used to be the Chicago, Rock Island and Gulf Railway tracks and then turns again right to keep its east-west direction, but now on the south sides of the now defunct railway.

This underpass is close to Exit 62 of I-40, where the W. Amarillo Blvd. merges with the Interstate. It was built to replace a very dangerous underpass whose remains survive until this day, but further west, closer to Bushland.

The Route 66 archaeologists may be interested in visiting this landmark:

The 1930s and 40s alignment of U.S. hwy 66 did not pass under the tracks by the Helium Plant. Instead the road kept its westerly direction for another 3.5 miles, along what is now Indian Hill Road, on the north side of the railway until it reached what is now Hill Dr., where it took a sharp entry and a sharp exit curve to pass in a very closed "S curve" under the tracks.

Just before its intersection with Hill Drive, the remains of the old 1940s highway paving can be seen on the left side of the road.

It seems that this part of Route 66 was the most dangerous of the whole highway. The unexpected "S curve" caught drivers unaware and speeding drivers crashed there quite often.

Just before the intersection with Hill Dr. you can spot the big chunks of cracked tar road surface curving towards the left between the old railway corridor (the tracks are long gone) and Indian Hill Rd.

The image above shows (top) the "S" of the old road in Red, the arrow marks the surviving portion of US Highway 66, and the railway line in yellow. It also shows (bottom) a 1984 USGS map with contour lines, which explains why the underpass was located here: The drainage is towards the south (bottom) through a culvert on Indian Hill Rd. and under the tracks, which ran on an embankment at that point (brown dashed lines). It is clear that the railway's bridge over this natural drainage was selected for the old U.S. 66 underpass (Red line). Modern I-40 is the double red line below the tracks.

The middle part of the image shows two thumbnails (originals can be viewed here), as seen from the south side of the tracks.

The "Death Trap", as it was known, stood there until the early 1950s (an deadly accident was recorded there in 1951) when the road was shifted to the south side of the tracks and the underpass, with a less pronounced "S curve" was built at its current position closer to Amarillo.

A very reliable website on the alignment of Route 66 incorrectly places this underpass 1 mile closer to Bushland, at the crossing of Blessen Rd. The correct placement is at Hill Dr. because the culvert seen in the left thumbnail (clearly visible in the original photos) is also visible in the satellite image above, just before the crossing, but there is no culvert at Blessen and Indian Hill Rd.

The now shuttered plant is 6.3 mi east of Bushland, along Highway 66, in Soucy.

Helium is a chemically inert (does not react with other elements) gas. It is light and non-flammable. It is quite rare but produced naturally by radioactive reactions within the Earth's crust. The gas accumulates with other naturally occurring gases in gas fields.

The old Helium Plant and its Historic marker, Amarillo: 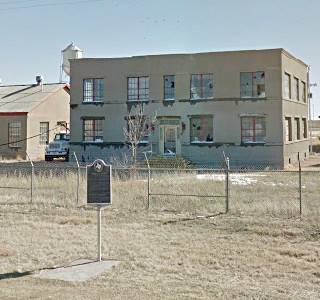 It is used as an inert atmosphere for welding, medical uses, for blimps and also for deep sea diving.

Helium from the Cliffside gas field in Potter County was extracted by the U.S. government's Federal Bureau of Mines at the United States Helium Plant outside of Amarillo.

The plant operated between 1929 and 1970, and for years Amarillo was the sole producer of commercial helium in the world.

By 1964, 95% of the world's helium was produced within 250 miles of Amarillo, the self-proclaimed «Helium Capital of the World»

We have a specific page with full information on the Cadillac Ranch, "Caddy Ranch" or «Ant Farm».

See how to reach Cadillac Ranch. This attraction is free of charge and open 24⁄7

Route 66 itinerary: getting to Bushland

From Amarillo to Bushland

Keep on it, it will become SW 6th Ave. There is an underpass (2.3 mi) and 6th Ave. changes its course (2.9 mi). Keep westwards crossing the Historic Sixth Street District.

Turn left to take Bushland Ave (3.8 mi) which has a southwesterly course and passes by Golf Links and (5 mi) passes under Bell St. Just after the underpass, turn left and enter W. Amarillo Blvd. (I-40 Business Loop) which will pass in front of the Veteran's Hospital.

The road curves gradually and crosses Coulter St. (5.8 mi), after that it heads west.

Immediately before the "S" curve under the railway take a right (9 mi) onto the old alignment of Route 66 , Indian Hill Rd.

From Indian Hill Rd. where it starts. Stick to Amarillo Blvd. and exit at Hope Rd. (10 mi), take a right along the South frontage Rd. and reach the Ranch (11.5 mi).

West of Bushland along Route 66:

The road continues to the Texas - New Mexico State Line, all the way to Glenrio, you can see the full detailed itinerary to Glenrio here: Amarillo to Glenrio.

The road passes through Wildorado, Vega and Adrian.