Yucca is located on the 1950s alignment of Route 66 between Kingman and Topock.

There are several classic sights the Honolulu Club, an Old Gas Station, the Site of the Desert Star motel, the kitschy Area 66 UFO museum and sphere and the Truck on a Pole.

For those who enjoy the outdoors, Lake Havasu State Park is quite close to Yucca.

On the "Valley cut-off" highway

Yucca is a community located on Interstate 40, Mohave County, Arizona. See this Map of Yucca.

It was named after the Mojave yucca or Spanish dagger, Yuca mohaviensis or Yuca schidigera, because many grew in the area.

This is a native plant that lives in the deserts of southwestern USA. It is a tree that can reach a height of 15 ft (5 m), it has sharp bayonet-like leaves, and white flowers.

Arizona has been inhabited for more than 10,000 years. The historic Native American people lived close to water sources, like the Patayan people along the Colorado River.

After the conquest of Mexico, Spain claimed the territory of Arizona as part of their New Mexico province, but they didn't settle there.

In 1821 Mexico won its independence from Spain and incorporated this territory, but lost in after the 1846-48 war with the U.S.

In 1850s, the U.S. commissioned Capt. Lorenzo Sitgreaves and Lt. Edward "Ned" Fitzgerald Beale to explore and survey the territory.

The post office opened in 1905. The Railroad linked it to the north with Kingman (with the sations of Athos, Kaster, Drake, Hancock, and McConnico), to the west, were the stations of Haviland, Franconia, Powel and Topock, followed by the Colorado River and California.

A book published in 1915 says that it had a population of 138 at that time, and that "The railway company sank a well 1,004 feet deep at Yucca some years ago which yields a supply of excellent water rising within 104 feet of the surface."

See this old map from 1915, with the railroad and Yucca.

As the automobile became more popular in the early 1900s, the National Old Trails Highway (N.O.T.) was built aligned along the railroad. It reached the area around 1914. This was known as the "Valley cut-off" highway, and is recorded as such on contemporary postcards.

A second N.O.T. highway took a more steep and winding rout through the gold-mining area of Oatman, further north.

When US highway 66 was created in 1926 it followed the N.O.T. highway west of Topock and east of McConnico, but bypassed the section that included Yucca. The route followed the steep and winding alignment across the Black Mountains through Oatman.

During World War II, the U.S. Army built a training airfield in Yucca that was later purchased by Ford Motor Co. as a proving ground.

The mines became exhausted in the late 1940s, and the Route 66 alignment through Sitgreaves Pass and Oatman was replaced by a new one, that ran along level ground, through Yucca.

US 66 brought travelers and tourists to town, and many cafes, motels and gas stations sprung up.

When interstate 40 was built, it followed this alignment, running together with US 66 until the former was decertified in the 1980s.

As it cut through the town, the local business dwindled, with tourists preferring to stop at neighboring Kingman or Needles.

Location of Yucca on Route 66

Yucca has a hot desert climate. Summers are very hot, and winters are cool.

Hardly any snow falls in winter. Summer is the rainy season, but rain is scarce not more than 4 in. or 10 cm in the rainy months.

This is not a tornado area. Read more about: the risk of Tornadoes on Route66.

Side Trip to Las Vegas

Famous Las Vegas in Nevada is a 2 hour - 130 mile drive to the northwest (See this map with directions.

>> Book your Hotel in Yucca

Book your hotel in neighboring Kingman

>> There are several RV campgrounds in Kingman

This is a short tour through Yucca from east to west (or north to south). Coming from Kingman, leave the freeway at Exit 26 and take the Frontage Rd. towards the south.

The Honolulu Club opened in Oatman, on the original Route 66 alignment.

It was a bar, dancing spot, garage and gas station. Below is a 1933 photograph of the Honolulu Club on Route 66 in Oatman

When the highway was realigned to the south, through Yucca, in the early 1950s, the club relocated in Yucca.

The building with its signs is still standing, but it is permanently closed (see this Street View).

Site of the Desert Star Motel

Between 4th Ave and 3rd Ave, to your right is the site of the former Desert Star Motel. Only the foundations survive. It was torn down a few years ago.

It was an eight-room motel built in the 1950s. You can see photos showing what it looked like, and how it decayed in our Our Facebook Post on the Desert Star Motel.

Street View, the sign, painted white is still there.

On the southwestern side of town, just passing W 12435 St. are the remains of an abandonded gast station.

The pump island can be seen, under the box-shaped canopy. See this street view.

Just ahead, turn left along Cal-Ari Dr. cross the interstate and turn right (south) towards the geodesic sphere along Alamo Rd.

Area 66 has a history dating back to the 1970s. It claims to be the "only geodesic sphere elevated off the ground by a single pole in the world."

Inside the 40 foot diameteer sphere is a museum dedicated to UFOs (such as the 1953 Kingman UFO) and a gift shop.

See this Street View of the sphere.

The sphere was built as a night club that was part of a scam real-estate project, the "Lake Havasu Estates".

The land was sold to gullible investors as part of Lake Havasu City (40 miles to the south, by a lakeside), but the 10,000 acres of desert in Yucca only had cactus. 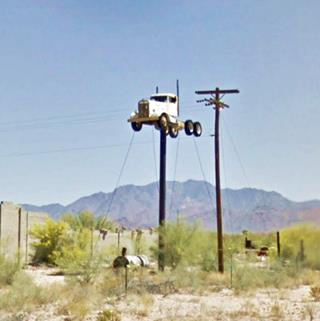 Truck on a Pole, Yucca AZ

A New York Times article published in 1972, mentions the sphere as follows "a big gold geodesic "dine sphere" that has never opened for dining."

Retrace your steps heading north along Alamo Rd. and continue as it becomes the Frontage Rd.

Truck on a Pole

To your right is a pole roughly 25 ft. high (7.5 m) with a Kenworth semi truck mounted on its tip.

This is all that remains of a truck stop that the desert has claimed (Street View).

Continue northwards and just ahead are the remains of the abandoned Joshua Motel and its café. 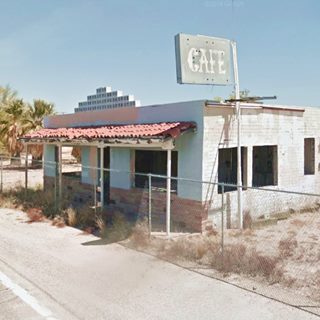 Ruins of a café, Yucca AZ

Ruins of a Joshua Motel & Café

The café was part of the motel, it has a Spanish tiled roof facing the road, the word "Cafe" written on the southern wall is barely visible. Street View.

As you can see in the 1950s postcard below, the café is unchanged. The neon sign lost its neon, and the building received a brick parapet as a decoration.

On the left side of the image (north) is the now abandoned motel.

See this Street View of the now empty motel.

Ahead, are the signs of the Whiting Bros. gas station and motel. The buildings have been razed. 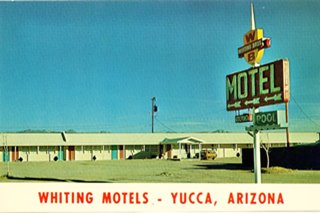 Four Whiting brothers (Arthur, Earnest, Eddie and Ralph) founded the company in 1926 and saw it grow to over 100 filling stations.

They also owned motels and truck stops. Many of these motels were located along Route 66 where you can still see the remains of them.

Learn all about the motels and gas stations of Whiting Bros along US 66 in New Mexico and Arizona.

The "pool" and the crest with the company's logo have vanished.

To the south of the motel was the gas station. Only the concrete pump islands and the two signs survive.

Street view of all three signs.

Return to the freeway at the exchange just ahead and continue your journey along Route 66.

Check out Yucca on our Arizona Route 66 Map, with the complete alignment and all the towns along it.

Click to read the Full description of Route 66 across Arizona.

The park is open 24 hs, and there is an entrance fee. It is located on a reservoir on the Colorado River.

You can hike, visit "London Bridge", the "worlds largest antique", only two miles from the park entrance.

>> Book your Hotel in Needles